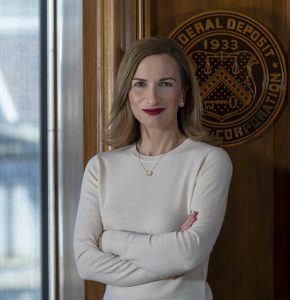 Jelena McWilliams, current Chair of the Federal Deposit Insurance Corporation (FDIC) since June 2018, has submitted her resignation to President Joe Biden, effective February 4, 2022. She will be replaced by Martin L. Gruenberg, current member of the FDIC Board of Directors.

Sworn in as the 21st Chairman of the FDIC on June 5, 2018, McWilliams was in the midst of a six-year term on the FDIC Board of Directors, and her term was not scheduled to end until June of 2023.

“When I immigrated to this country 30 years ago, I did so with a firm belief in the American system of government,” said McWilliams in her resignation letter. “During my tenure at the Federal Reserve Board of Governors, the United States Senate, and the FDIC, I have developed a deep appreciation for these venerable institutions and their traditions. It has been a tremendous honor to serve this nation, and I did not take a single day for granted. Throughout my public service, I have been constantly reminded how blessed we are to live in the United States of America.”

Prior to joining the FDIC, McWilliams was EVP, Chief Legal Officer, and Corporate Secretary for Fifth Third Bank in Cincinnati, Ohio, serving as a member of the executive management team and numerous bank committees, including: Management Compliance, Enterprise Risk, Risk and Compliance, Operational Risk, Enterprise Marketing, and Regulatory Change.

From 2007-2010, McWilliams served as an attorney at the Federal Reserve Board of Governors, where she drafted consumer protection regulations, reviewed, and analyzed comment letters on regulatory proposals, and responded to consumer complaints.

In legal practice, she advised management and boards of directors on corporate governance, compliance, and reporting requirements under the Securities Act of 1933 and the Securities Exchange Act of 1934. She also represented publicly- and privately-held companies in mergers and acquisitions, securities offerings, strategic business ventures, venture capital investments, and general corporate matters.

“Serving the American people alongside the dedicated career professionals of the FDIC has been the highlight of my professional life,” said McWilliams. “Throughout my tenure, the agency has focused on its fundamental mission to maintain and instill confidence in our banking system while at the same time promoting innovation, strengthening financial inclusion, improving transparency, and supporting community banks and minority depository institutions, including through the creation of the Mission Driven Bank Fund. Today, banks continue to maintain robust capital and liquidity levels to support lending and protect against potential losses.”