Debt is something we all have to come to terms with, whether it’s the $20 you owe to a friend or a mortgage, it all adds up and can be a drain on not just your finances, but the whole economy.

In a new study by NerdWallet [1], a company that provides consumers and small businesses with financial guidance, it has found that Americans are collecting more debt than they did in 2020 with the average debt load pegged at $155,622 per household, a 6.2% increase. Americans now collective hold $15.24 trillion in debt when accounting for all reportable debt types.

NerdWallet collaborated with a separate company, The Harris Poll, to gather the data for this study. 2,036 individuals over 18-year-old were interviewed for this study, representing a statistical cross section of the population at large. 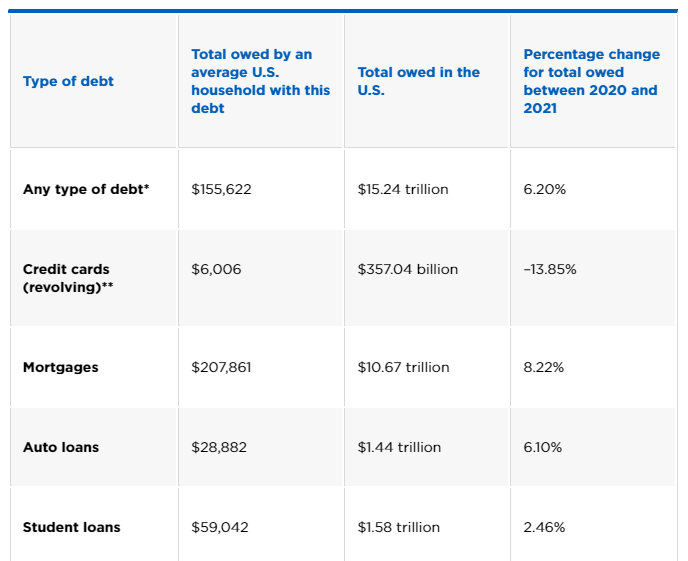 The survey found that of those who are struggling financially, most cited a lower or stagnant income and higher living expenses as the reason why. In general, it was found that 35% of respondents said their financial situation has gotten worse over the past year. Of that group, 38% say it's because their household income decreased overall, and 36% say it's because their household expenses increased overall.

78% of Americans benefited in some way from Pandemic relief programs, like the expanded child tax credit or stimulus checks, with most using it to pay for necessities or adding it to their savings accounts. Moreso, 18% of Americans kept themselves afloat by using credit cards during the pandemic, digging themselves further into debt.

"As the pandemic continues, many consumers are still facing financial hardships – and rising costs for life essentials like groceries, gas, and medical needs can be an additional hurdle," said Sara Rathner [2], a credit cards writer at NerdWallet. "Leaning on a credit card to make ends meet can be costly, but during a difficult time, it can be a necessary fallback. Consumers whose finances have improved this year may be setting lofty money goals, but it's equally admirable to focus on the basics, like adjusting your budget or rebuilding an emergency fund."

The study also found that:

Click here [3] to view the study in its entirety, including breakdowns of data.