Home / Daily Dose / A Bump in Rates and Loan Sizes

A Bump in Rates and Loan Sizes Mortgage interest rates are up, according to the latest report from the Federal Housing Finance Agency (FHFA) and its Mortgage Interest Rate Survey (MIRS). The FHFA reports that interest rates in December were at 4.08 percent, a 3 basis point increase from November’s 4.05 percent, and 10 basis points higher than October’s rate of 3.98 percent. The effective interest rate, which accounts for the addition of initial fees and charges over the life of the mortgage, also saw an increase by 3 basis points month over month, from 4.05 percent in November to 4.08 percent in December.

In the FHFA’s release, the agency states that while the The National Average Contract Mortgage Rate for the Purchase of Previously Occupied Homes by Combined Lenders Index rose from 4.05 percent to 4.08 percent month over month, the average interest rate on all loans rose 2 basis points, from 4.03 percent in November to 4.05 percent in December.

For 30-year, fixed-rate mortgages of $424,100 or less, the average interest rate remained unchanged month over month, remaining at 4.17 percent in December from November. 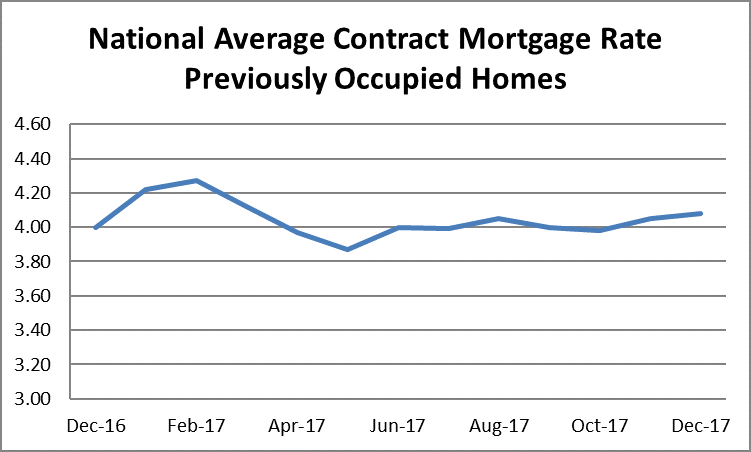 Values from December’s MIRS are based on 3,646 reported loans from 16 lenders who reported on terms and conditions of all loans closed during the last five working days of the month, and excludes mortgages guaranteed or insured by either the Federal Housing Administration or the U.S. Department of Veterans Affairs. The FHFA will release the results of its January 2018 MIRS on February 27. The complete contract mortgage rate series can be found on the FHFA website.

Previous: Reviewing the Biggest Legal Landmarks of 2017
Next: Chicago Tops List of Most Affordable Rental Markets