Pacaso released their Second Home Market Report, the most timely and localized data available for the top 50 second home markets. The report shows that in Q1 of 2021, the percentage of second home mortgage rate locks hit its highest recorded level, with the share of second home transactions reaching 5.7%. 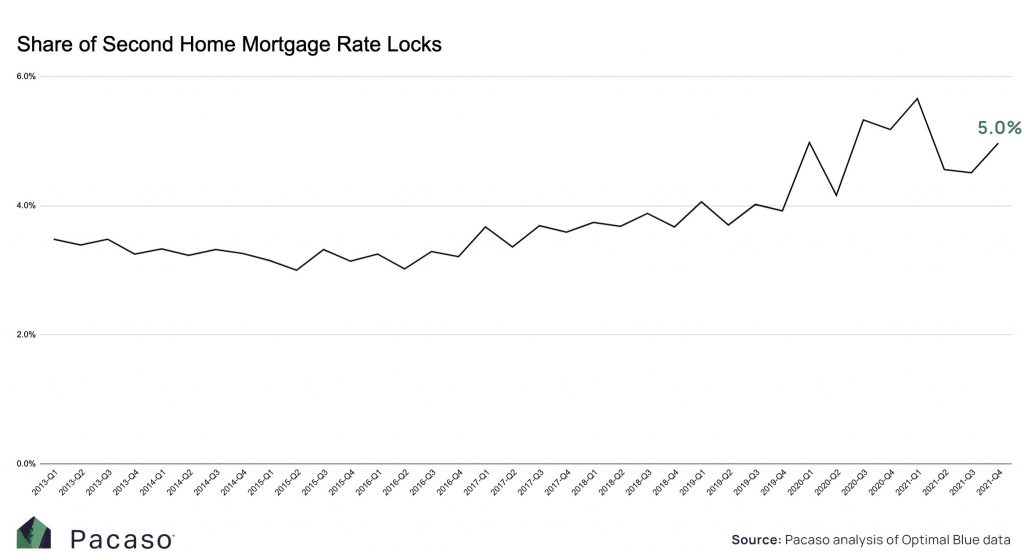 "Looking back at this past year, we saw the percentage of second home sales decrease in the second and third quarter, after peaking in the first three months of last year," said Pacaso CEO Austin Allison.

"In April of last year, however, people stopped to take a beat, to see how things would shake out in what everyone hoped would be a post-pandemic reality. For some, that also meant going back to the office, and perhaps not coincidentally, second home sales started to slow. But these last few months, many employers finally decided to make remote work more permanent. This seems to have spurred renewed interest in second home ownership."

Some 43 of the 50 counties tracked in Pacaso's report saw double-digit price growth in second home prices in Q4. Mono County, California, topped the charts in terms of price growth. With a median purchase price of $790K, rates are up a whopping 83.7% compared to a year ago. The increase is likely driven by several factors, including the area's natural beauty, its proximity to expensive West Coast population centers, and limited new construction.

Atlantic County, New Jersey saw the largest annual declines in second home median sale prices. Down 14%, New Jersey has been particularly susceptible to foreclosures, and according to new ATTOM data, New Jersey counties had the third-highest number of foreclosures—1 in every 1,288 units—in the country in Q4. St. John's County in Florida also saw an increase in transactions, with second home mortgage rate locks up 9.7% year over year in Q4.

"For the past year we've been tracking up-and-coming second home hot spots," said Allison. "And actually, Sumter is a perfect example of the kinds of locations we call 'vacation-destination-adjacent' that have been catching our eye. If established second home destinations are like Broadway, these emerging nearby destinations are like Off-Broadway, and their moment in the limelight or the sunshine is coming."