Home / Daily Dose / How to Respond When eNotes Default

How to Respond When eNotes Default 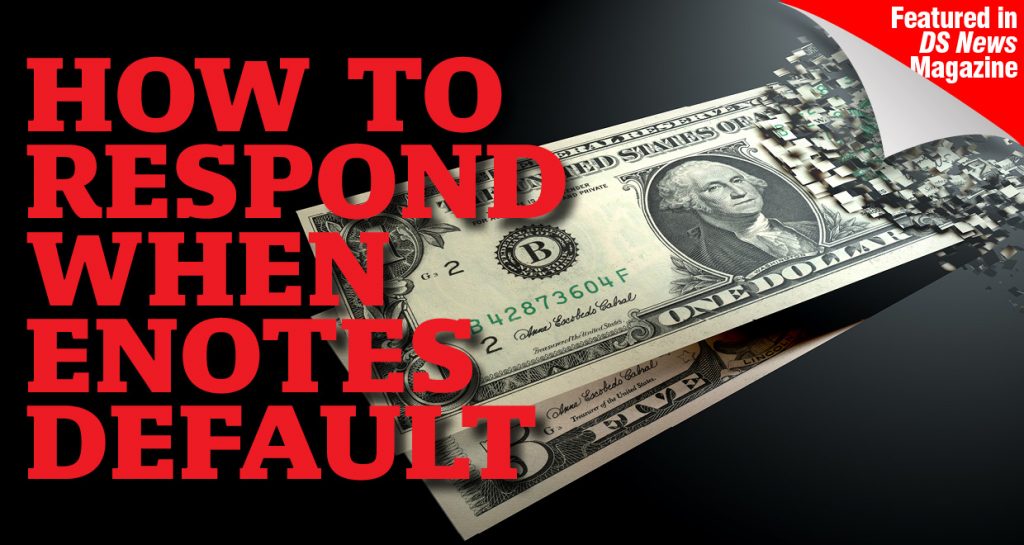 While 2020 had a surplus amount of catastrophic news, there was one positive development with the rising volume of loans originating with eNotes. According to the Mortgage Electronic Registration Systems Inc. (MERS), the number of eNotes registered within their eRegistry last year climbed to over 400,000 loans, a 264% year-over-year increase in activity. A mere two years earlier, only 375 new loans were registered on the eRegistry.

An eNote is the electronic equivalent of a paper promissory note that is negotiable under Article 3 of the Uniform Commercial Code and is used by Fannie Mae and Freddie Mac. The federal Electronic Signatures in Global and National Commerce Act (ESIGN Act) made eNotes legally enforceable in all 50 states and the District of Columbia. The state-level Uniform Electronic Transaction Act (UETA) has been passed in 48 states, the District of Columbia and the U.S. Virgin Islands, with New York and Illinois having nonconforming electronic transaction laws. The ESIGN Act and UETA framed the legal principle that electronic signatures and records should be accorded the same legal status as ink signatures and paper records.

The historical information and transfers of eNotes are recorded via an electronic system known as the MERS eRegistry System. The eRegistry system does not store the actual eNote, but it keeps a record of identifying information including the eNote’s digital fingerprint, current controller and location of the eNote. The actual authoritative copy of the eNote is held by the controller or its authorized custodian in an electronic vault.

As notes transfer, the controller of the note changes. From a legal standpoint, this is an important area in evidencing who owns the debt in court actions. Because eNotes are not endorsed, the transfer of control is reflected in the MERS eRegistry and the controller is the entity which has the same rights as a holder of a written promissory note.

The major benefit of the eNote involves time and financial savings: it is generally less expensive to create, store, and transfer eNotes in comparison to the traditional written promissory note. And while written promissory notes may be subject to becoming misplaced over time, which would call for the creation of a lost note affidavit to establish who is currently entitled to enforce the note, an electronic record greatly reduces the potential for uncertainty on who is entitled to enforce and when that right originated.

Enforcement of a Defaulted eNote

In an original note state, an authoritative copy of the eNote will be needed along with the original mortgage. The MERS eTransfer history and/or the eNote Information screen from the MERS eRegistry will also be needed to show the current controller of the eNote.

The current controller or their delegate will be the plaintiff in the foreclosure case with the right to enforce the eNote. In many states, an affidavit may be needed to show the proper process and security surrounding an eNote.

Under UETA’s requirements for the enforcement of an eNote, the bank/servicer must prove that the document would be a promissory note if it was in writing and that the borrower expressly agrees it is a transferrable record. The holder/controller must also provide reasonable proof it is in control of the authoritative copy.

Due to the historically low volume of eNotes up until 2020, there are only three appellate cases of record: one in Indiana (2014), one in New York (2016) and one in Florida (2016). The defenses raised in these cases include the plaintiff (bank or servicer) did not prove they had the right to bring the case against the borrower, as the plaintiff did not have standing to sue the borrower.

In reading these cases, it becomes clear the new language surrounding eNotes and the MERS eRegistry played a large part in the issues raised and the results. The Appellate Court found in favor of the bank/servicer in the New York and Florida cases; the exception was the Indiana case, where the MERS eRegistry records were not placed into evidence. Without evidence of who the controller was, the Appellate Court remanded the Indiana case for further evidence to determine the controller of the eNote in question.

What the Future Holds

It is safe to assume that more legal issues will arise in the future as the volume of eNotes being originated continues to rise. As eNotes are done electronically, there will be more defenses raised on whether the proper processes were being used at the origination of the loan – specifically, the eNotarization process and the process for the service transferring of eNotes using the MERS eRegistry.

Borrowers’ counsel can be very creative when litigating, causing confusion whenever a new system or process is involved, and this will most likely occur with eNote enforcement. The education of the judges will be a key element in obtaining foreclosure judgments – most judges that routinely handle foreclosures are accustomed to paper-based notes and wet ink signatures, so a foreclosure based on eNotes and eSignatures will be very new to them.

Furthermore, obtaining the proper documentation to establish the right to enforce an eNote, along with laying the proper foundation by affidavit or witness testimony to introduce this new evidence in court, will be a potential obstacle if opposing counsels object to the evidence and try to cause confusion to obtain rulings in their favor.

Mortgage professionals in the default servicing industry need to know and understand the process used in originating and foreclosing eNotes. In a few years, eClosings may become the norm instead of the exception, and becoming expert in the new terminology and process is key to effectively creating procedures to service an eNote in default.

Marcos Posada is the Managing Partner for McCalla Raymer Leibert Pierce, LLC’s Illinois Litigation Practice Group. Posada manages the retention of Illinois litigation matters and works to represent our clients as Litigation Counsel for outside matters. In addition to having daily oversight over the firm’s entire portfolio of litigated matters, Posada is directly involved in the firm’s Appellate cases, successfully obtaining decisions favoring his clients in nearly every case. Marcos is an alum of Northern Illinois University School of Law. He was a 2019 ALFN JPEG Award Winner and participates in the Legal League 100, the Complex Litigation Practice Group of the American Legal and Financial Network, Co-Chair; and the USFN, Diversity and Inclusion Committee Member.