No FDCPA Harm, No FDCPA Foul 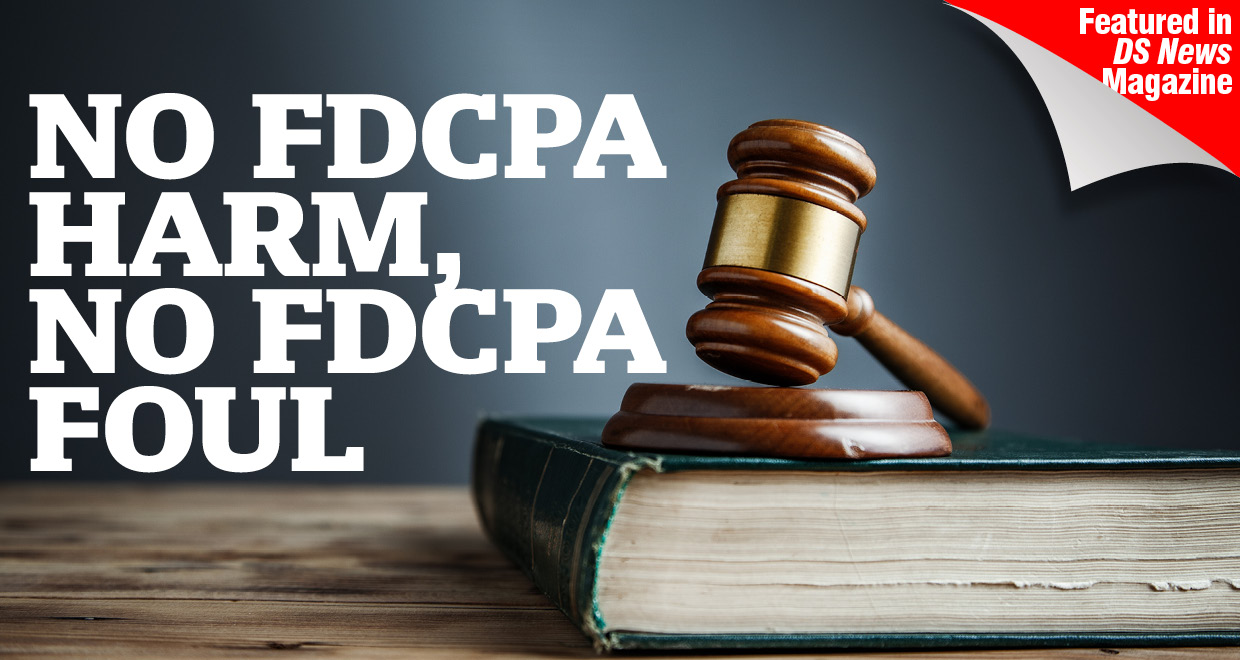 The United States Court of Appeals for the Seventh Circuit has recently released a veritable avalanche of debt collector-friendly opinions regarding “standing” under the Fair Debt Collection Practices Act (FDCPA), which given the relative dearth of lender-slanted opinions in this legal niche, seems practically momentous. As of the time of writing, no less than six opinions on this narrow topic were issued over little more than a week in mid-December of 2020, leaving the distinct impression that the Court is sending a message.

Standing is a party’s right to sue. It only exists if a party has suffered a harm, as courts aren’t supposed to ponder the mere theoretical. In other words, a party that hasn’t suffered an injury won’t typically be permitted to proceed with suit. In legal terms, the need to allege harm is typically referred to as the “injury in fact” requirement, although how it applies to the FDCPA has been the subject of considerable debate. Namely, the quandary has centered around whether a statutory violation alone is sufficient, or whether some resulting actual harm must also have occurred.

The FDCPA is a federal statute dictating debt collection practices, one of which is the requirement that debt collectors send consumers written notices which clearly disclose the amount of debt owed. Each of the Seventh Circuit’s six cases dealt with various consumer attacks upon these requisite notices, whether for statements alleged to have been improperly made, or for statements alleged to have been improperly omitted. In each of these cases, the Court repeatedly emphasized the need for actual harm to have occurred as a result of the allegedly improper statement or omission in order for the FDCPA action to be viable.

In Larkin, the Court dismissed the case for lack of standing, explaining that alleging actual harm was necessary regardless of whether the violation alleged was procedural or substantive in nature. Larkin v. Fin. Sys. of Green Bay, 2020 U.S. App. LEXIS 39058, *10, (7th Cir.). As the Court stated, the debtor failed to argue that the allegedly improper notice caused them “to pay debts they did not owe or created an appreciable risk that they might do so,” or that they “were confused or misled to their detriment by the statements,” or “otherwise relied to their detriment on the contents of the letters…” Id. at *12. Therefore, according to the Court, the debtors sought “to invoke the power of the federal courts to litigate an alleged FDCPA violation that did not injure them in any concrete way, tangible or intangible,” which it deemed to be impermissible. Id. at *13. (The Court did caution, however, that suing a debtor after failing to provide any of the mandatory FDCPA disclosures would likely suffice. Id. at *9-10).

Similarly, in Gunn, where a debtor argued that an improper notice resulted in annoyance and intimidation, the Court was hardly impressed. As the Court chided: “Indeed, it is hard to imagine that anyone would file any lawsuit without being annoyed (or worse). Litigation is costly for both the pocketbook and peace of mind. Few people litigate for fun. Yet the Supreme Court has never thought that having one's nose out of joint and one's dander up creates a case or controversy.” Gunn v. Thrasher, Buschmann & Voelkel, P.C., 2020 U.S. App. LEXIS 39267, *5-6, (7th Cir.).

In Bazile, the debtor alleged that the FDCPA notice failed to mention interest accrual, thereby depriving her of information which resulted “in a misleading or inaccurate statement of the debt's amount.” Bazile v. Fin. Sys. of Green Bay, Inc., 2020 U.S. App. LEXIS 39433, *9, (7th Cir.) However, the Court pointed out that further evidence was still necessary, as the debt collector had argued that no interest had or would accrue on the debt, implying that the debtor “could not have suffered an injury from the letter's omission concerning interest accrual.” Id. at *11. Moreover, the Court noted that it’s the Court’s own responsibility to ensure that standing exists, even where the parties fail to raise the matter. “Federal courts ‘have an independent obligation to ensure that they do not exceed the scope of their jurisdiction, and therefore they must raise and decide jurisdictional questions that the parties either overlook or elect not to press.’(citation omitted)” Id. at *11-12.

Correspondingly, in Spuhler, which also involved an allegation of impropriety due to an alleged accruing interest omission, the Court stated that the “exclusion must have detrimentally affected the debtors' handling of their debts…” in order for the case to proceed. Spuhler v. State Collection Serv., 2020 U.S. App. LEXIS 39434, *7, (7th Cir.). And in Nettles, where the debtor admitted that the only injury was the “receipt of a noncompliance collection letter,” the Court summarily dismissed the matter. “Because Nettles has not alleged that she suffered an injury from the claimed FDCPA violations, she has failed to plead facts to support her standing to sue.” Nettles v. Midland Funding LLC, 2020 U.S. App. LEXIS 40012, *8, (7th Cir.).  Notably, the Court added “She did not claim, for example, that she tried to dispute the debt or even considered contacting the defendant to dispute or verify the debt.  So there was no risk that the defendant’s error could have caused her to lose section 1692g’s statutory protections because she did not ever consider using them.”

Therefore, the Court has clearly stated, again and again, that an improper FDCPA notice absent actual harm fails to give rise to a cognizant legal action, which may greatly stem the FDCPA litigation flood of late, at least in the Seventh Circuit.

Lauren Riddick is Contested Litigation Attorney at Codilis. She currently handles foreclosure matters in Lake County and assists with Deed in Lieu matters. She joined the firm in August 2013. Prior to joining Codilis, Riddick was an Adjunct Professor of Law with several colleges and a Securities Attorney for a large broker-dealer in Florida. Riddick is a member of the Illinois and Florida Bar Associations and holds a Juris Doctor from the University of Florida Levin College of Law as well as a Bachelor of Science from the University of Florida.