ATTOM Data Solutions has released its Q4 2020 Opportunity Zones Report, analyzing qualified low-income Opportunity Zones established by Congress in the Tax Cuts and Jobs Act of 2017, examining 3,588 zones around the U.S. with sufficient sales data to analyze, meaning they had at least five home sales in Q4 2020. The report found that median home prices increased from Q4 2019 to Q4 2020 in 77% of Opportunity Zones with sufficient data, and rose by more than 10% in nearly two-thirds of them.

Opportunity Zones are defined by Congress as census tracts in, or alongside, low-income neighborhoods that meet various criteria for redevelopment in all 50 states, the District of Columbia, and U.S. territories. Census tracts, as defined by the U.S. Census Bureau, cover areas with 1,200-8,000 residents, with an average of approximately 4,000 people.

"The country's long run of home-price increases continues to leave no part of the housing market untouched, boosting fortunes from the wealthiest to the poorest parts of the United States,” said Todd Teta, Chief Product Officer with ATTOM Data Solutions. “The latest evidence is the fourth-quarter 2020 data showing prices going up in Opportunity Zone neighborhoods at around the same rate, and sometimes more than in more well-off communities. No doubt, prices remain substantially lower in Opportunity Zones, but the fact that they often rose by double-digit percentages in Q4 is significant. Not only does it show market strength, but it also suggests that many distressed communities are ripe for the redevelopment that the Opportunity Zone tax breaks are designed to promote."

ATTOM breaks down data about some of the top-performing Opportunity Zones in the graph below: 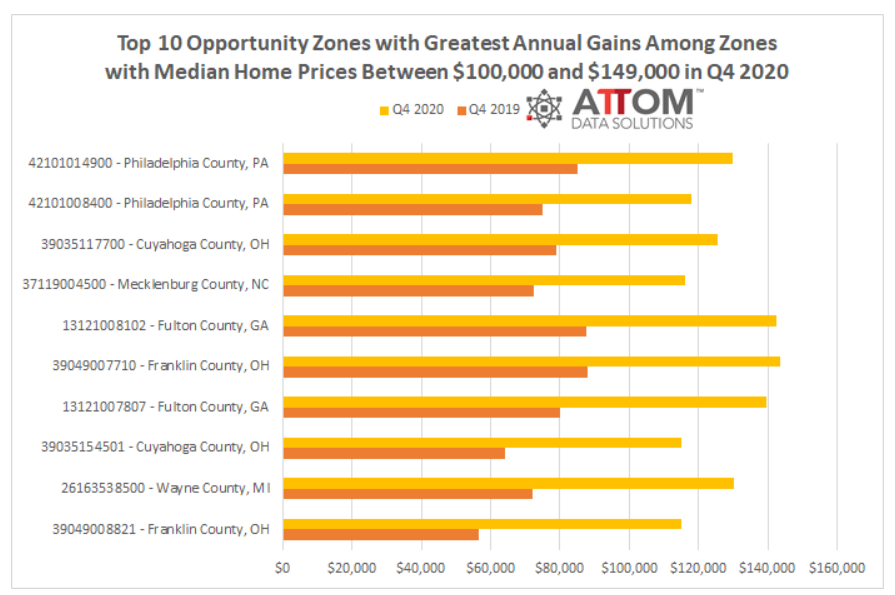