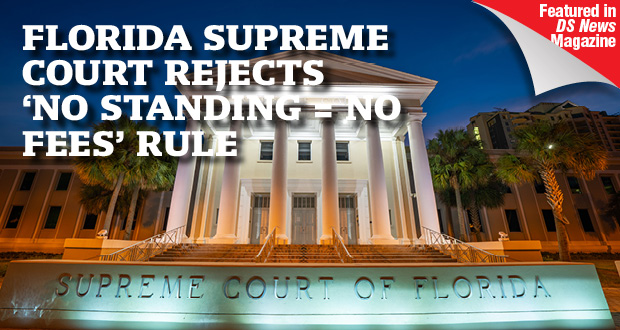 On December 31, 2020, the Florida Supreme Court issued its decision in Page v. Deutsche Bank Trust Company Americas, quashing the Fourth District’s holding that a borrower who successfully argues that a plaintiff lacked standing to foreclose is not entitled to an award of attorney’s fees pursuant to section 57.105(7), Florida Statutes, which provides that when a contract provides for the recovery of attorney’s fees to one party, the court may also award attorney’s fees to the other party when that party prevails in any action with respect to the contract.

The Fourth District in Page certified conflict with the Fifth District’s decision in Madl v. Wells Fargo Bank, N.A., and the Second District’s decision in Harris v. Bank of New York Mellon, both of which held that a borrower who successfully argues lack of standing can be awarded fees under section 57.105(7) if it is otherwise established that the plaintiff became subject to the unilateral fee provision in the mortgage. In Madl and Harris it was held that because the plaintiff established standing at the time of trial, the borrower was entitled to an award of attorney’s fees despite prevailing on the argument that the plaintiff failed to establish standing at the inception of the action. By contrast in Page, the Fourth District ruled that regardless of whether or not the bank established standing at the time of trial “[i]f the borrower prevails on its 'lack of standing' defense, it cannot rely on the contract to obtain attorney’s fees”.

The court began its analysis by looking to the plain language of 57.105(7), which requires (1) the existence of a fee provision in the underlying contract and (2) that the other party prevail in the action with respect to the contract. As to the first prong, the court explained that the statute requires that the plaintiff and defendant not be strangers to the contract. In this regard, the Court found that the record established that the bank “proved standing at the time of trial”, and therefore a contractual relationship existed between the parties. “The first clause of the statute requires nothing more."

As to the second prong, the court held that Page, the borrower, was “the other party” contemplated by the statute and “prevailed in an action” that can only be said to be “with respect to the contract." "The second condition of the statute is satisfied."

The court then explained why it rejected the Fourth District’s rationale that (1) 57.105(7) is unavailable unless the contract is shown to be enforceable by both parties to the litigation on the day suit is filed, or (2) implicitly applied the doctrine of judicial estoppel. The court held that there is nothing within the statute that requires both parties to be parties to the contract on the date the suit is filed. Moreover, it held that the doctrine of judicial estoppel did not apply because it did not view Page’s standing defense as irreconcilable with her subsequent argument that she is eligible for fees under section 57.105(7). “There was no adjudication that the note and mortgage never existed or that the bank never acquired the right to enforce the note and mortgage. The bank simply failed to carry its burden of proving it was the holder of the endorsed note at the time suit was filed.”

The “No Standing=No Fees” argument is effectively dead. Other than cases where it is proved that the note and mortgage do not exist, the borrower is adjudicated a non-party, or standing to foreclose does not exist either at the inception of the case or at trial, it is unlikely that an award of attorney’s fees to the borrower will be denied.

The court appears skeptical of the rule that standing to foreclose must be proven at the inception of the action, as opposed to later during litigation. The court noted in a footnote that the issue was not before the court, and “we therefore have no occasion to address the soundness of that rule." The court also questioned the purpose rule during oral argument.

2021-03-04
Christina Hughes Babb
Previous: Listen: What a New Administration Means for Housing Policy
Next: The Week Ahead: In Pursuit of Fair Housing for All