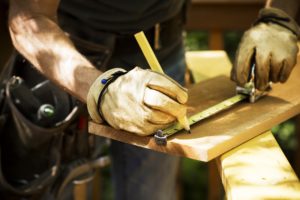 For the fifth year in a row, LightStream [1], the online lending division of SunTrust Bank, has conducted their annual Home Improvement Survey [2], taking a magnifying glass to how homeowners plan to remodel, improve, and repair their homes this year. According to the survey, 58 percent of homeowners are planning some sort of home renovations in 2018.

LightStream found that homeowners are willing to spend more this year as well. Forty-five percent of those surveyed said they planned to spend $5,000 or more on home renovations this year, which is an all-time high for the LightStream Home Improvement Survey. Moreover, the percentage of respondents who said they were planning to spend $35,000 or more doubled over 2017 [3]’s totals.

While some homeowners will inevitably hire professionals to do the work for them, 65 percent of respondents said they planned to do at least some of the renovation work themselves. Thirty-five percent said they would tackle the projects entirely on their own. Unsurprisingly, the do-it-yourself contingent increases among younger respondents—70 percent of 18-34 year-olds surveyed said they intended to do at least a portion of the work themselves.

As in previous years, outdoor renovations remain extremely popular, with 43 percent of homeowners saying they planned to make outdoor improvements, up five percent over 2017’s numbers. When it comes to interiors, nearly a third of homeowners said they planned to remodel their bathrooms in 2018, and more than one in four planning some kitchen work.

Only seven percent of those surveyed said their planned repairs were a prelude to putting their home on the market (the lowest percentage since 2015). Fourteen percent of homeowners say they’re making their renovations “to prepare my home so I can stay in it as I get older.” That includes 11 percent of the 18-34 demographic and 10 percent of the 35-44 group.

Supporters of the recently passed tax reform bill argued that it would help stimulate the economy, but is that translating to homeowners when it comes to home renovation plans? According to the survey, one in four homeowners who plan to renovate cited the tax reform bill as affecting their plans, with 18 percent planning to increase their budget and 7 percent planning to spend less.

Most homeowners plan to pay for renovations out of their savings (62 percent), with credit cards (30 percent), home equity lines of credit (13 percent), and home improvement loans (9 percent) following down the list.

You can read the full results of LightStream’s survey by clicking here [2].