2020 Delinquencies Hit Both Highs and Lows 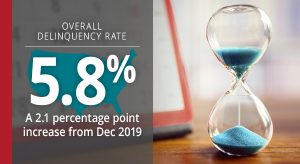 Nationwide, 5.8% of mortgage loans are in some stage of delinquency, according to the latest monthly Loan Performance Insights Report from the property data analysts at CoreLogic, which covers data from December 2020.

According to CoreLogic, in December 2020, the U.S. delinquency and transition rates, and their year-over-year changes, were as follows:

Last year launched with the lowest share of overall delinquencies since data recording started in 1999, CoreLogic reported, but as the pandemic and shelter-in-place directives spread, the rate doubled from 3.6% in March to 7.3% in May, the researchers added. As those initially affected by the pandemic and ensuing recession transitioned through stages of delinquency, serious delinquencies increased four-fold compared to pre-pandemic rates, and they peaked last August.

"The ongoing forbearance provisions and economic aid implemented at the start of the pandemic has proved helpful for families faced with financial insecurity,” said Frank Martell, president and CEO of CoreLogic.

CoreLogic's Chief Economist Frank Nothaft confirms the correlation between areas suffering the highest unemployment and those with the fastest growing mortgage delinquencies.

The full report is available on CoreLogic.com.