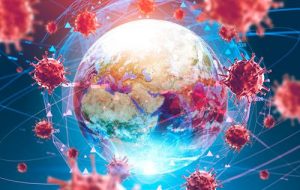 The Washington Post [1] reports that the Federal Reserve cut interest rates to zero on Sunday in an effort to bolster the U.S. economy as it combats the effects of the coronavirus.

The benchmark interest rate is now in a range of 0% to 0.25%, which is down from a range of 1% to 1.25%. The Fed also announced it is re-starting its "quantitative easing," as it did following the Great Recession to try and get money into the markets and the economy.

"The Committee expects to maintain this target range until it is confident that the economy has weathered recent events and is on track to achieve its maximum employment and price stability goals," said the Fed in a statement.  [2]Officials will continue to monitor the "implications of incoming information" for economic outlook including information related to public health, global developments, and muted inflation pressures, according to the statement. The Fed added it will "use its tools and act as appropriate" to support the economy.

The reduction of interest rates to 0% was suspected at the end of last week, as Goldman Sachs economists expected this move, according to The Street [3].

“In light of the continued growth in coronavirus cases in the U.S. and globally, the sharp further tightening in financial conditions, and rising risks to the economic outlook, we now expect the [Federal Open Market Committee] to cut the funds rate 100 basis points on March 18," Hatzius wrote.

In the meantime, Treasury Secretary Steven Mnuchin told CNBC [4] on Friday the market sell-off will be short-lived and looks like a compelling opportunity for investors looking to buy equities at a discount.

According to Mnuchin, the current sell-off is more short term than the crisis in the 2010s, comparing it more to the “Black Monday” crash in 1987.

“This is not like the financial crisis, where people don’t know when this will end: We will get through this,” Mnuchin added. “By the end of the year, I think you can expect we’re going to have a big rebound in economic activity.”

Further cancellations are on the horizon as well in response to COVID-19. On Thursday, Congresswoman Maxine Waters, Chairwoman of the House Financial Services Committee, announced the postponement of all remaining public hearings for March due to the urgent public health crisis resulting from the pandemic coronavirus.

Friday afternoon President Donald Trump officially announced a national emergency [5] due to COVID-19. This declaration will free up $50 billion in federal funding that can be used to help state and local governments.

He added that the U.S. has made “tremendous progress” as it combats the coronavirus. Trump imposed a 30-day travel ban on foreign nationals from Europe entering the U.S. on Wednesday.

“We will overcome,” Trump said during his address in Rose Garden, adding that the nation’s fight against COVID-19 is entering a different phase. Trump said that a new partnership has been forged with the private sector to develop testing for COVID-19. The President, however, stressed that only those who show symptoms use the tests.