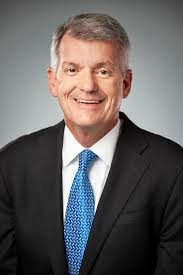 Wells Fargo CEO Tim Sloan [1] announced Thursday that he will retire, less than three years into his tenure running the bank. Sloan will step down at the end of June.

C. Allen Parker, Wells Fargo's General Counsel, will serve as interim CEO and President while the bank searches for a long-term replacement.

“In my time as CEO, I have focused on leading a process to address past issues and to rebuild trust for the future," Sloan said in a statement. "We have made progress in many areas and, while there remains more work to be done, I am confident in our leadership team and optimistic about the future of Wells Fargo." He added that his resignation came in part because "our ability to successfully move Wells Fargo forward from here will benefit from a new CEO and fresh perspectives. For this reason, I have decided it is best for the Company that I step aside and devote my efforts to supporting an effective transition."

“Tim Sloan has served this company with pride and dedication for more than 31 years, including in his role as CEO since October 2016," said Wells Fargo Board Chair Betsy Duke in a statement. "He has worked tirelessly over this period for all of our stakeholders in the best long-term interest of Wells Fargo."

Sloan had recently appeared before Congress himself, addressing the House Financial Services Committee to discuss the bank’s progress in providing reparations related to past scandals and how the bank is working to improve its culture and better serve its customers.

The hearing [3] stemmed back to 2016, when the Consumer Financial Protection Bureau (CFPB), Office of the Comptroller of the Currency (OCC), and Los Angeles City Attorney fined Wells Fargo Bank collective penalties of $185 million for opening millions of deposit and credit-card accounts in customers’ names without their consent or knowledge. The CFPB and OCC imposed the bank with civil money penalties and demanded restitution to harmed customers.

In this month's hearing, Sloan claimed the bank has worked toward a change in leadership, culture, and practices. He pointed out that Wells Fargo has created the required ethics training for all team members titled “Change for the Better.” He also added that he “cannot promise perfection” but suggested that the changes implemented will act as a deterrent to further issues. "We’ve made fundamental changes," Sloan said. "I can give personal assurance the bank will comply with consent decrees.”