Home / Daily Dose / How Distressed Disposition Can Heal, Not Harm

How Distressed Disposition Can Heal, Not Harm 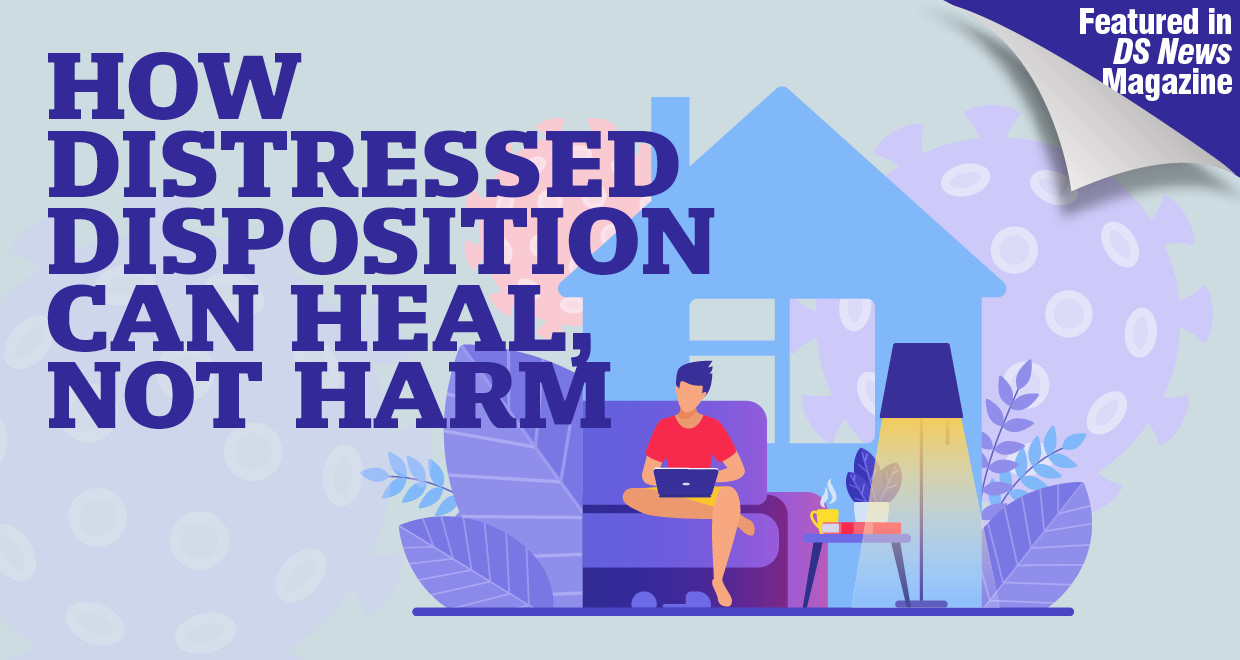 The number of mortgages in active forbearance in the first week of February fell below 2.7 million for the first time in 10 months, another milestone pointing to a largely successful program that has prevented much harm to the U.S. housing market.

Building on the success of the forbearance program, three key disposition strategies will help speed healing in the housing market when the pandemic wanes and foreclosure moratoria are eventually lifted: 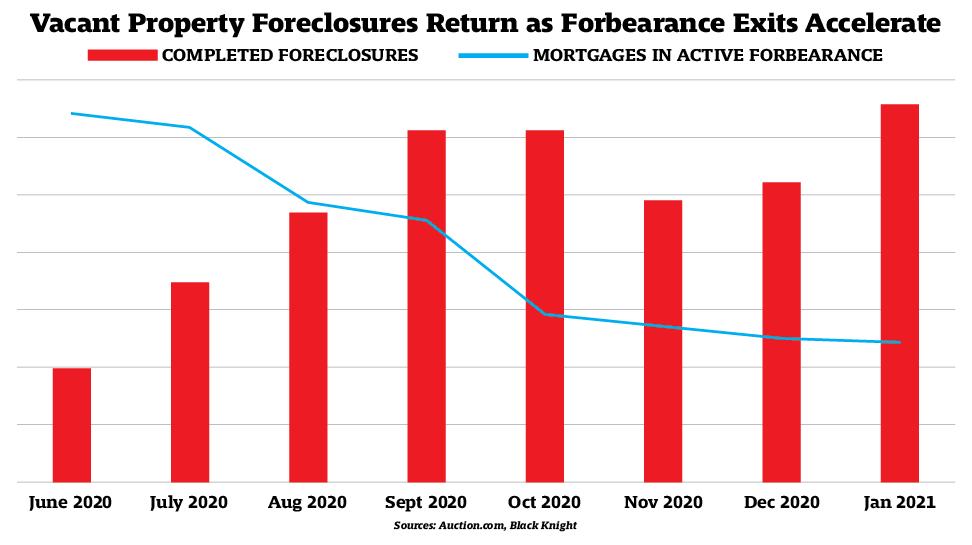 Completed foreclosure auctions increased to a seven-month high in October, according to data from the Auction.com platform. Although still well below pre-pandemic levels, the seven-month high in October corresponded with a sharp drop in active forbearances in the first week of October as many reached the end of the first six-month forbearance window allowed by the CARES Act. Black Knight data shows the number of mortgages in active forbearance dropped a whopping 649,000 in the week ending October 6.

Similarly, Auction.com data shows completed foreclosure auctions increased to a 10-month high in January, corresponding to another sharp decline in active forbearances at the beginning of the month—dropping 95,000 in the week ending January 6, according to Black Knight. Again, despite the monthly increase in January, foreclosure levels remained well below year-ago levels given that foreclosures were limited to almost exclusively vacant or abandoned properties.

The foreclosure of vacant or abandoned properties contributes to the health of the local housing market without bringing harm to individual homeowners, according to neighborhood stabilization advocates like Julia Gordon, President of the National Community Stabilization Trust (NCST).

“When a property has become vacant for some reason but does not go through foreclosure, it will invariably blight the community,” Gordon said. “Having something sit there pre-foreclosure and post-occupancy makes no sense to me.”

As more mortgage servicers implement the strategy of foreclosure sales on vacant or abandoned property, the rate of vacant “zombie” foreclosures has leveled off, according to ATTOM Data Solutions. The zombie foreclosure rate jumped 24% to a three-year high in the third quarter of 2020, in the immediate aftermath of the pandemic declaration. However, the rate has since leveled off at 3.8% in both Q4 2020 and Q1 2021 as vacant property foreclosures ramped back up. 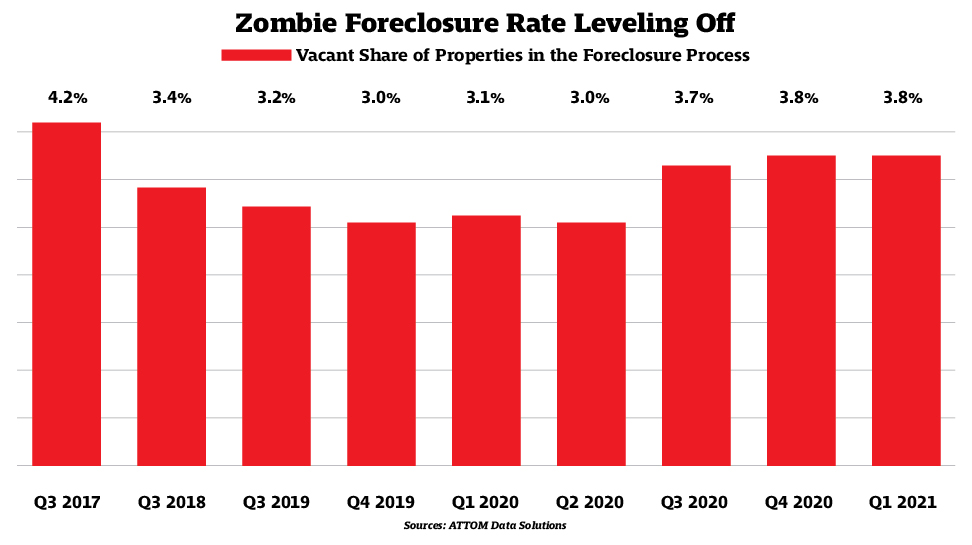 Leveraging the full power of strong buyer demand to uncover hidden home equity for distressed homeowners is a second disposition strategy that will help speed the healing of the post-pandemic housing market.

Many servicers have implemented tactics that execute this strategy in recent years, but with a different objective in mind: lower loss severity on defaulted mortgages. 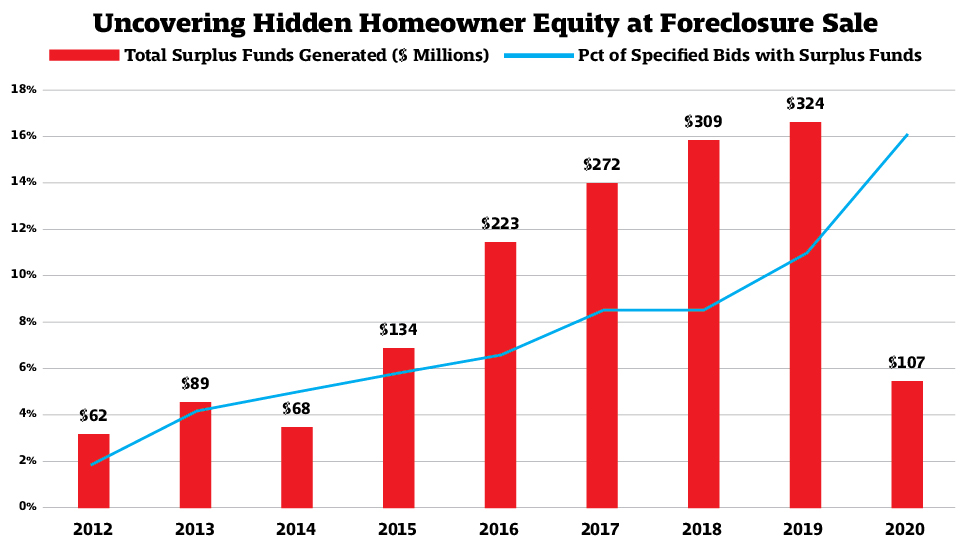 Lower loss severity is often achieved when exposing distressed properties to a broad marketplace of buyers earlier in the disposition process—namely, at the courthouse foreclosure auction or in a “day one” online REO auction shortly after the foreclosure sale. These tactics improve price execution while eliminating or reducing holding costs.

An Auction.com analysis of more than 70,000 properties brought to foreclosure auction on its platform in the four quarters ending in Q1 2020 show that selling to third-party buyers at the foreclosure auction improves price execution relative to the lender’s credit bid by 17 points when compared to selling as real estate owned (REO) on the multiple listing service (MLS). The third-party foreclosure sale also saves servicers an average of 268 days in REO holding costs.

It turns out the same tactics used to reduce loss severity for servicers can also benefit distressed homeowners, specifically in the context of the courthouse foreclosure auction.

At the very least, better price execution reduces the amount of deficiency between the foreclosure sales price and unpaid loan balance. This lessens the potential deficiency judgment that distressed homeowners may be on the hook for. 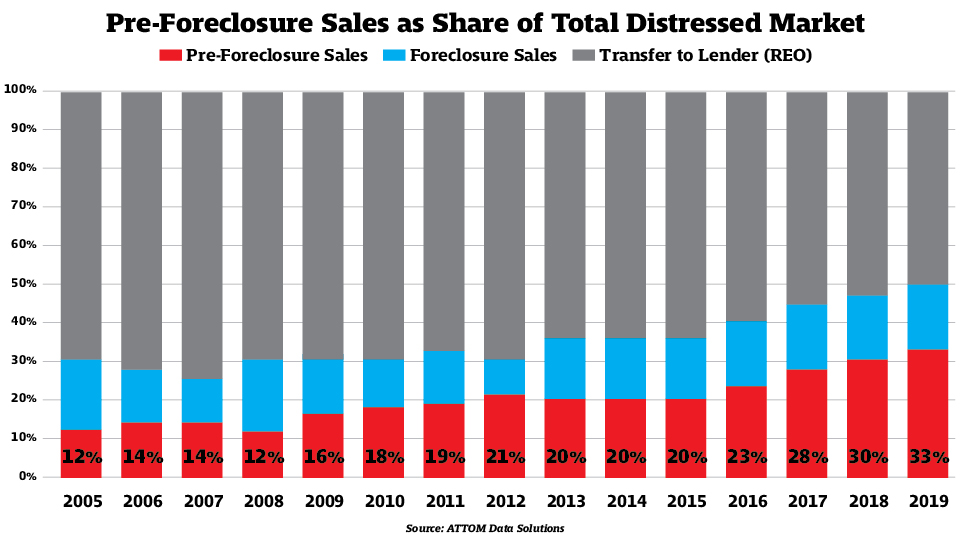 At best, improved price execution at foreclosure sale results in surplus funds above the unpaid loan balance owed to the foreclosing lender. These surplus funds first go to pay off any junior lien holders, with any excess beyond that going to the distressed homeowner. In this scenario, the distressed homeowner not only avoids any threat of a deficiency judgment but also walks away from the foreclosure with cash to show for the home equity uncovered in a transparent and competitive auction environment.

In 2020, 44% of properties sold to third party-buyers at foreclosure auction via the Auction.com platform resulted in surplus funds—where the winning bid was higher than the total debt owed to the foreclosing lender. Total surplus funds generated by these sales were $107.2 million, an average of $34,310 per sale. Over the last five years, more than $1.2 billion in surplus funds have been generated by third-party foreclosure sales closed through the Auction.com platform. 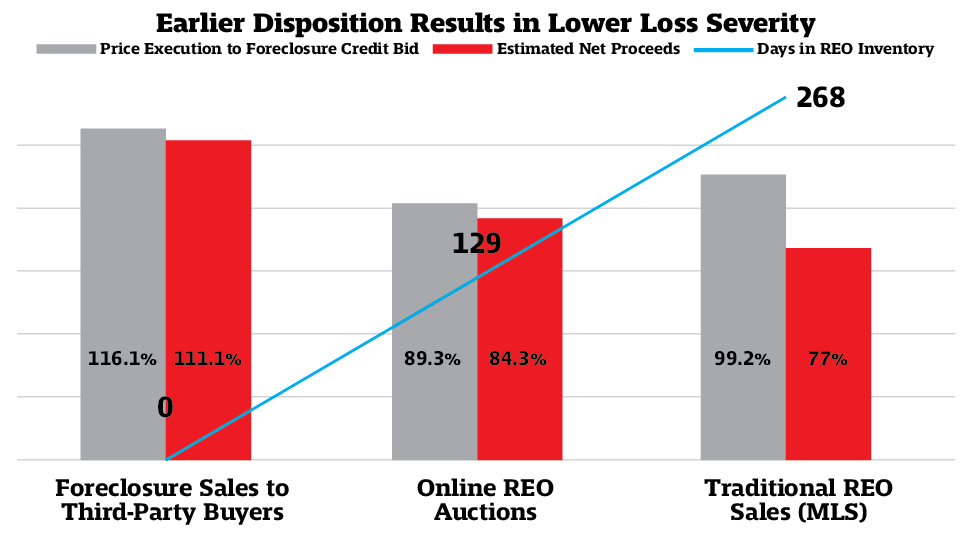 Surplus fund sales in 2020 were down from 2019, when surplus fund sales represented 46 percent of all third-party foreclosure sales and total surplus funds reached a record-high $324.5 million; however, the lower numbers in 2020 were due largely to side effects of the forbearance moratoria: much lower foreclosure sales volume overall and a much higher concentration of vacant or abandoned properties—which are less likely to have equity.

Some of the increase in surplus funds comes thanks to the overall home price recovery that has lifted all boats. This is evident in the rising share of foreclosure sales where the foreclosing lender’s credit bid is total debt owed—indicating the perceived potential for equity. The share of foreclosure sales with total debt bids more than doubled between 2012 and 2020, from 11 to 24%. Meanwhile, the share of total debt sales with surplus funds stayed consistently between 98 and 100% over that six-year period—indicating lenders did not substantively change their methodology for determining the potential for home equity. 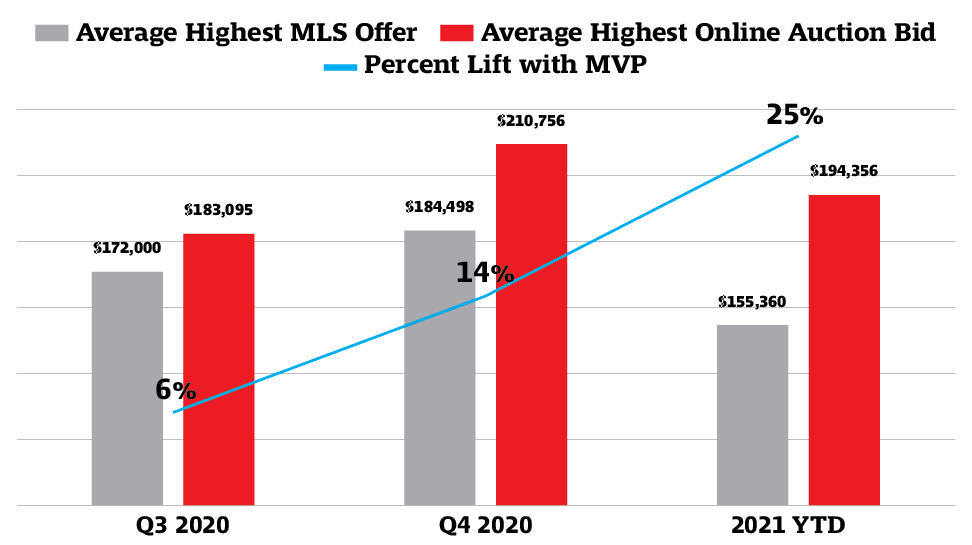 However, even among sales where there was no perceived potential for home equity, the share of surplus fund sales has been skyrocketing. Among foreclosure sales where the lender lowered the credit bid below total debt owed, also known as specified bid sales, the share with surplus funds increased by eightfold between 2012 and 2020—from just 2 to 16%.

These specified bid foreclosure sales that end up generating surplus funds are a prime example of how a transparent foreclosure marketplace can fully leverage the power of buyer demand to uncover hidden home equity. Neither the distressed homeowner nor the foreclosing lender perceives that the property has any equity, but a free and open marketplace of more than 6 million buyers proves otherwise—benefitting both the mortgage servicer and the distressed homebuyer.  3

Mortgage servicers like Specialized Loan Servicing (SLS) are gearing up for more short sales and other pre-foreclosure sales in the aftermath of the pandemic-induced recession, according to CEO Toby Wells.

“With the pandemic, there are going to be a lot of tools that are available to consumers to stay in their homes, but inevitably there are going to be some cases where that may not make sense, and a short sale is an appropriate transaction,” said Wells, whose company services a $120 billion mortgage portfolio for 80 clients across a wide variety of mortgage products.

Since August 2020, SLS has been leveraging the online auction environment to help overcome some of the common obstacles that can trip up traditional short sales, according to Wells. The company has been participating in the Auction.com market validation program (MVP), which exposes pre-foreclosure sale properties to Auction.com’s potential buyer base of more than 6 million registered users in a transparent and competitive marketplace.

Wells said running pre-foreclosure properties through MVP has improved pricing certainty, speed of sale, and fraud mitigation—the three main issues that have contributed to a cumbersome short sale process historically. Overcoming these obstacles sets the company up well to work through the pandemic distressed volume in an efficient, orderly and responsible manner.

“It allows us to efficiently work and facilitate short sales on behalf of consumers and investors with a lot more certainty in terms of price and timeline, which is going to be important to resolving some of these lingering defaults that inevitably will be in place following the pandemic,” he said.

Data from Auction.com shows more than half of pre-foreclosure properties in MVP have received winning bids that are higher than the highest offer submitted on the multiple listing service (MLS). Those MVP-winning bids are an average of 18% higher—or $30,830 higher on average—than the highest MLS offer. The MVP lift on pre-foreclosure sale prices has been steadily increasing since the program launched, from 6 percent in Q3 2020 to 25 percent so far in 2021.

MVP runs in parallel with the servicer’s approval process and takes less than two weeks. More than 80 percent of the pre-foreclosure sales have sold to new buyers who did not submit the highest and best offer on the MLS, with the remaining 18% going to the same buyer who submitted the highest offer on the MLS. Those latter buyers in effect were willing to submit a higher bid in the online auction environment than they were on the MLS.

The efficiency and performance resulting from innovation like MVP will ultimately help more homeowners impacted by the pandemic to avoid foreclosure, Wells noted.

“Short sales really provide for a graceful exit from the property if the homeowner can no longer afford the mortgage,” he said. “So short sales are a critical resolution, and certainly preferable to any type of foreclosure, REO, etc. If we can work with a homeowner to exit the property early, it’s beneficial for both the homeowner and the investor.”

Innovating pre-foreclosure sales is one of three strategies—along with leveraging buyer demand and prioritizing foreclosures on vacant or abandoned properties—mortgage servicers could utilize in the post-pandemic housing market. Employing these strategies will help bring faster healing to the housing market while also not doing more harm to already-distressed homeowners.