Full Speed Ahead with Mortgage Tech 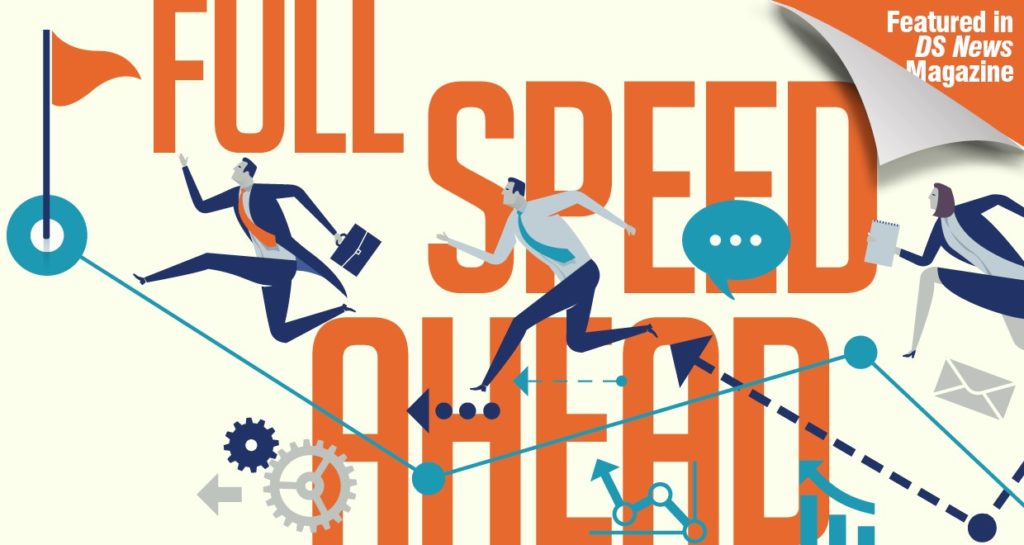 Editor’s Note: This story was originally featured in the April issue of DS News, out now.

Technology has been the go-to answer for dealing with change in our industry since around the late 1980s. The mortgage lending business has used technology to automate and digitize a process that had traditionally been buried in piles of paper. In fact, we have accomplished so much here that most people don’t even notice that our business adopts technology more slowly than just about any other industry.

Changes in our industry have continued to be fomented by both market and regulatory forces. A keen observer of these will attempt to forecast both the business and technological evolutions that must be adopted not just to cope, but to lead. The pace of these changes require that we look several steps ahead. We certainly saw that just after the financial crash, when it became clear that one in 10 home loan borrowers would go into default. The same thing happened to loan origination system (LOS) developers during the runup to the crash.

With loan volumes three times as high as they had ever been before, lenders were struggling to keep up. The problem was that most of the new business was subprime and the old LOSs didn’t work as well with those “story” loans. They needed new tools if they were going to keep up with Wall Street’s appetite for assets they could securitize. There were plenty of observers in those days warning of the imminent crash. We must look at leading indicators in the development and adoption of new technology with the same diligence that we have always read the tea leaves that might forecast changes in interest rates. With that goal in mind, let’s explore five hot tech trends and see what they may mean for our business in 2018.

For the longest time, much of the work performed by industry technologists had to do with writing code to seamlessly connect different systems, owned and controlled by different parties. Ensuring data integrity, security, and ease-of-use was tough work. No one wanted to give up too much about their own proprietary systems. Today, that work is pretty much all done for us by the software.

The Application Programmer Interface (API) made it possible for the programmer to expose data feeds and query hooks into a system, making it easy for another programmer working on another system to connect and share information. Today, there are a great many APIs accessible via the internet that can allow a coder to reach out and get just about any kind of information they need. Security is built in. Data integrity is a function of the standards and protocols created by the API developer.

This has contributed to a shift from software application development to platform development, where the platform user connects to various other necessary systems via APIs to get the information required to complete the work. As a consequence of this, we’re seeing more partnerships where platform providers are gaining access to systems operated by third parties that already work with lenders or servicers. This means that users of the platform don’t have to buy or install software from the third party anymore. They can just connect it to their existing platform, whether that be a LOS, a servicing platform or an asset management platform.

What does this suggest for the future? We think it means that platform developers have to do a better job of finding, vetting and connecting to the applications that their users need. It has now become a primary driver of their customer’s satisfaction. Th e companies that do it best will be most successful.

It also means that more users from different parts of the industry are likely to crowd onto the best platforms, regardless of who those systems were originally designed to serve. We’re seeing that now with some of our urban revitalization efforts. We’re working with asset managers, as usual, but now we’re also making room for investors, lenders, field services personnel, and community-based organizations. They don’t all need their own platforms. They just need a platform that can connect them all together to meet their mutual goals.

The concept of the “black box” has fallen out of favor. Today, it’s not good enough to just tell a party to a transaction, a business partner or a regulator that the right information is in there. You must be able to prove it. Everyone wants to know what information exists where and where it’s going next.

Consequently, we’re seeing a big shift toward transparent platforms. In fact, I would go so far as to say that if you don’t offer full transparency, your platform will struggle to get user adoption.

From data we began collecting in 2015, we’ve seen with the launch of new software we created for transparent real estate offer management, that REO managers were seeing a significant increase in a number of important metrics related to the sale of REO properties as well as a reduction in time on the market. These improvements only occur with transparency built into the platform. Here are some of the metrics we found after studying nearly 425,000 offers placed through the system.

Transparency is a good and necessary thing. But we expect to see the push for even more transparency across all of our industry’s platforms. In the end, we expect this to increase adoption for the industry’s best platforms and wash the others out.

TREND 3: REGTECH WILL GET BUILT IN

Over the past few years, we’ve all watched the rise of Regtech with various states of anxiety. Regtech is built specifi cally for regulatory compliance. On the one hand, technology is our only hope for complying with an avalanche of new rules. On the other, the idea of having to buy, install, train for, and then demand adoption of new technologies is never comfortable for anyone. As the rules continue to change, we expect the technology to evolve in order to keep up, but the real trend is the way companies are choosing to use it.

More and more, we’re hearing customers demand that the Regtech they need be either built into our systems—where much of it already lives –or to be seamlessly connected so that users can access it without leaving their normal working platform. This implies that many of the developers working on compliance technology will get purchased by platform developers in the near future, which is the exit strategy for which many of these developers have secretly hoped would happen.

Loan originators and the software developers that serve them have all done a great job moving the front end of the home finance transaction out beyond our traditional platforms. They have created portals and apps that are allowing more borrowers to interact with their lenders the way they want to and on their own schedules. But the loan origination process is just the tip of the iceberg.

An American consumer may spend 30 days or more going through the work of buying a new mortgage loan, but they will spend a much longer period of time paying it back. Some borrowers, the minority, spend 30 years on a conventional loan that they spend just a few weeks originating. This suggests that the servicing industry should be doing more to connect with borrowers in the mobile space because there will be more pressure on servicers to maintain customer relationships in those cases where buyers have bought in haste, or bought the wrong product.

I don’t think this has happened in the past because the nature of the servicing business has always been about processing payments and less about customer relationship management. Th at’s going to change for a lot of reasons that have nothing to do with technology. It’s going to be about customer service expectations that loan buyers have developed from all their other online transactions, increasingly on their mobile devices. Buyers will continue their interest in communicating even after the loan closes.

The plus for servicers is that in the unlikely event that the borrower gets into trouble, they have more ways to stay in touch with the borrower and more of an opportunity to get the consumer back on track. It may not always work, but it’s got to be better than the method's default servicers have been using up to now to track down borrowers that fall off the grid when they get into trouble.

Finally, technology will, after decades of working on the problem, get paper out of our process. With everything in the process now fully electronic, including the note, there’s no reason for the lender to keep holding onto paper. This is good news because the lender will no longer have to spend the time and money collecting all of the paper, stacking it up, sending it to the investor, who will send it to the servicer, who will give it to a custodian, who will lose it.

This doesn’t mean there won’t be any paper involved in closing a mortgage loan, just that lenders won’t have to worry about it. While we’re still seeing lenders paper out at the end of the process, it’s primarily so borrowers have something they can take home with them, other than 30 years of debt that is. Consumers still want the paper, at least some of it. And that’s a consumer technology trend that will continue until we get consumers to completely trust our industry. That could take a while.

I think the important thing to note in all of the trends we have identified in this article is that none of them are really about new technologies. Rather, they are focused on people and the way people are choosing to use technology today. These trends will determine which tools get used.

There may yet be new technologies developed, but it is unlikely that they will impact our industry in the near future. We already have tools to take our business to consumers where they want it and when be that at home or on a mobile device. We have digital signatures and secure systems through which to view and sign the documents. I don’t think it’s likely that we’ll have consumers asking us to close a loan or handle a dispute in virtual reality, at least not any time soon.

No, we have the tools we need to get our work done and to satisfy our customers. The only question now is how we will use them.