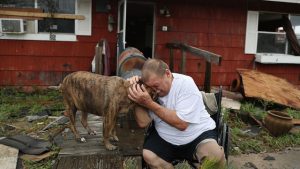 Natural disasters caused a record $306 billion in damages to the United States in 2017, according to the National Oceanic and Atmospheric Administration. With the next hurricane season fast approaching, the United States Department of Housing and Urban Development on Tuesday announced a major disbursement of funds to help communities still recovering from last year’s storms. At $28 billion, the newly announced HUD grants represent the largest single amount of disaster recovery assistance in HUD’s history.

The nearly $28 billion funds will come from HUD’s Community Development Block Grant—Disaster Recovery Program. Allotted for nine states, Puerto Rico, and the U.S. Virgin Islands, the funds will go toward helping with “seriously damaged housing, businesses, and infrastructure from major disasters that occurred since 2015,” according to HUD’s statement.

Within that $28 billion, $12 billion is slated to help with recovery programs for last year’s disasters, while $16 billion is targeted for damage mitigation activities within communities affected by Presidentially declared disaster areas since 2015. According to the HUD statement, “Mitigation can broadly be described as actions taken to protect communities from the predictable damage from future events.”

“It’s clear that a number of states and local communities are still struggling to recover from a variety of natural disasters that occurred in the past three years,” said HUD Secretary Ben Carson. “These grants will help rebuild communities impacted by past disasters and will also protect them from major disasters in the future.”

Puerto Rico is receiving the largest allotment of relief funding, with a total of over $18 billion. That includes $10 billion toward recovery from last year’s devastating hurricanes and $8.3 billion toward mitigation. Both the U.S. Virgin Islands and the state of Louisiana topped a billion dollars’ worth of relief, with the Virgin Islands to receive $1.6 billion and Louisiana getting $1.2 billion. While the Virgin Islands funding is divided almost evenly between recovery and mitigation, Louisiana’s funds are all slated for mitigation projects.

You can see the full breakdown of where the rest of HUD’s $28 billion is headed by clicking here.

Previous: Serious Delinquencies Still Elevated in Hurricane-Impacted Markets
Next: Assessing the State of the Market