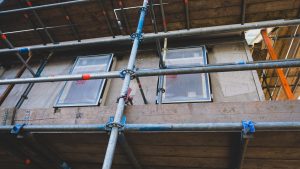 Making up for the lack of U.S. housing inventory, builders nationwide got to work in March, as the U.S. Census Bureau and the Department of Housing & Urban Development (HUD) announced that housing starts rose 19.4% month-over-month in March to a seasonally adjusted annual rate of 1.74 million, the highest number of housing starts since 2006.

The severe winter weather that hit Texas and parts of the Northeast slowed residential construction in February, as the thaw in March allowed builders to get back on track, with continued strong buyer demand, despite rising lumber prices and supply chain issues.

"Compared to March of 2020, housing starts were up by 37%, illustrating just how much the economy has improved in the face of COVID-19,” said LendingTree Chief Economist Tendayi Kapfidze. “The significant improvement over February was a recovery from weather-constrained activity. Shortages in raw material, like lumber, are still presenting headwinds for builders. Overall, March’s new construction numbers are a positive indicator for both the housing market and the economy as a whole, especially compared to last year. While the threat of COVID-19 has not totally gone away, its impact on home building has significantly lessened. Going forward, rising lumber costs will likely continue to be a problem for builders, which is somewhat of a concern. Nonetheless, high demand for new homes should offset these rising material costs."

“While housing demand is expected to remain strong, we expect it to diminish somewhat as the year progresses due to the waning effect of the COVID-19 disruption to homebuyers’ purchasing timelines,” said Doug Duncan, Fannie Mae Chief Economist. “Furthermore, homebuilders continue to face supply constraints, including increasing prices of lumber and other materials. For now, however, the extremely tight supply of existing homes for sale and an elevated level of new homes sold, but not yet constructed, will help bolster a strong construction pace moving into the spring buying season.”

“With the inventory of existing homes near historic lows and consumers seeking larger homes with updated features and technology, new homes have moved up in priority on many buyers’ wish lists,” said realtor.com Senior Economist George Ratiu. “The NAHB Housing Market Index has spent the past four months near four-decade highs, as home builders respond to the unseasonably high demand, and work to overcome the gap brought about by last year’s lockdowns. With the cost of lumber reaching new highs, however, the higher costs are being passed on to consumers. While new construction is a critical component in rebalancing the current dynamics, lack of affordability will continue to weigh on the housing market for the remainder of 2021.”

Previous: The Week Ahead: An Eye on the Rural Rebuild
Next: Storms, Holidays, and COVID-19 Shaped March Housing Metrics