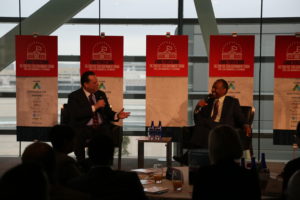 On Thursday, it was reported that U.S. Sen. Tammy Duckworth (D-Illinois) has placed a blanket hold on all nominations for vacant positions within the U.S. Department of Housing and Urban Development.

Sen. Duckworth made this move after not receiving a response within her prescribed deadline to a letter containing more than 25 detailed questions that she and Sen. Dick Durbin (D-Illinois) sent to HUD Secretary Ben Carson regarding the closure of two dilapidated public housing complexes in Thebes, Illinois, that impacted 85 residents. In the letter, the Senators called the closing “an ill-advised and heedless decision.” HUD placed the county public housing authority in administrative receivership in 2016 after diagnosing years of mismanagement by local public housing authorities, a move widely praised at the time by both senators.

On April 3, Five Star President and CEO Ed Delgado and HUD Secretary Dr. Benjamin Carson met at the Five Star Government Forum in Washington D.C., where they commented on the urgency around resolving Brian Montgomery's nomination as Assistant Secretary for Housing and Federal Housing Administration Commissioner for the United States Department of Housing and Urban Development.

However, the blanket hold, a parliamentary procedure designed to keep present and future departmental nominations from being considered on the Senate floor so long as it is in place, may have more detrimental ramifications than Sen. Duckworth is anticipating—and the people it will impact the most are American homeowners.

“The delay on the nomination of Brian Montgomery is a political game played at the expense of homeownership,” Delgado said in reaction to the hold. “For three and a half years, FHA has been without a confirmed, permanent commissioner. This hold continues the practice of depriving HUD of vital leadership at one of its most crucial positions. These types of parliamentary tricks are out of step with the needs of homeowners and represent politics at its worst.”

Earlier this month, Delgado, on behalf of multiple trade organizations, sent a letter to the Senate Majority Leader Mitch McConnell, congratulating him on working with the administration to lead the confirmation process of a record number of nominees to the federal bench, but urging that the Senate move on the nomination of Brian D. Montgomery for the position of Assistant Secretary for Housing and Federal Housing Administration Commissioner for the United States Department of Housing and Urban Development.

“On November 28, 2017, and again on January 8, 2018, the Senate Banking Committee voted to recommend the nomination of Brian D. Montgomery … Now, nearly four months since being approved by the committee for the second time, the status of Mr. Montgomery’s nomination to lead the Federal Housing Administration remains uncertain, with no vote scheduled in the near term,” Delgado wrote.

In his letter, Delgado outlines the importance of the FHA to the mortgage industry and in preserving the American Dream of Homeownership, citing that the agency’s portfolio totals more than $1.37 trillion dollars in assets; has provided mortgage insurance for 47.5 million single-family homes and since its inception; and in 2017, FHA insured 37.7 percent of all mortgages provided to racial or ethnic minorities.

“Despite its importance within the mortgage market, the FHA has been without a Senate-confirmed leader since 2014, stymieing the effectiveness of the organization and the ability of its staff to make meaningful policy adjustments as the market dictates,” Delgado wrote.

In addition to Montgomery, two other senior nominees await confirmation votes for HUD positions, according to the Washington Post Nomination Tracker.

Robert Hunter Kurtz is awaiting confirmation as Assistant Secretary for Public and Indian Housing. The position serves as the principal adviser to the Secretary and Deputy Secretary on matters relating to the development and management of the department's public and Indian housing programs, which provide affordable housing to more than 1.3 million households nationwide and oversees a budget of about $27 billion.

Seth Daniel Appleton is also awaiting confirmation for the post of Assistant Secretary for Policy Development and Research, the principal advisor to the Secretary on overall departmental policy, program evaluations, demonstrations, and research, and who is responsible for providing economic information and analyses of housing and community development statistics and other data.

Previous: Lawmakers React to Wells Fargo Fine
Next: Single-Family Rentals Over the Past Decade