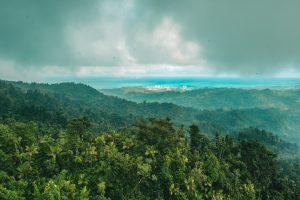 Puerto Rico's hurricane recovery efforts—specifically those following Hurricane Maria in 2017—have been slow compared to that of other parts of the United States. The New York Times reported back in February that that is due in part to restrictions on Puerto Rico's aid funds put in place by The Department of Housing and Urban Development (HUD) under the previous administration.

The Biden administration at the time reportedly began working to remove some of those spending restrictions put in place after Maria, and progress has been made in the past several days.

Last week, HUD announced it would remove those "onerous restrictions" unique to Puerto Rico, which prevented the island's access to recovery funds allocated in 2017, following Maria. The department also said last week that it owes a total of $8.2 billion in Community Development Block Grant Mitigation funds to Puerto Rico.

Last week's actions are the latest in an ongoing whole-of-government effort to support the island’s recovery and renewal, according to the department.

“Since its first days, the Biden-Harris Administration has prioritized action to enable stronger recovery for Puerto Rico,” said HUD Secretary Marcia L. Fudge. “...HUD will unlock access to funds Puerto Rico needs to recover from past disasters and build resilience to future storms while ensuring transparency and accountability. We are committed to an ongoing partnership with Puerto Rico to empower the island’s communities and help them build back better.”

Among the restrictions removed by HUD are the incremental grant obligations and review by the Federal Financial Monitor. HUD also removed the requirement for Puerto Rico to request and submit any certification, observations, and recommendations by the Financial Oversight and Management Board, beyond what is already required by law.

The announcements come on the heels of an investigation looking into why officials withheld about $20 billion in hurricane relief for Puerto Rico following the devastating aftermath the 2017 hurricane, reportedly one of the deadliest U.S. natural disasters in over 100 years.

Program funds can be used in areas impacted by recent disasters to carry out strategic and high-impact activities to mitigate disaster risk and reduce future losses.

Both NBC and The New York Times have reported that neither former HUD Secretary Benjamin Carson nor former President Trump responded to requests for comment on the situation. Nor did they respond to queries from DS News in February. But a HUD representative named Michael Burns told the Times in February that the effort by Biden to resume aid to Puerto Rico represents an attempt to “reset” its relationship with the island. He says this "will help the island build resilience to future storms and floods."

Want to learn more about navigating disaster in your own sphere?