Nearly Half of All Delinquent Mortgages on Loss Mit Plans According to the new data released by the Federal Reserve Bank of Philadelphia, it’s predicted that roughly 2.15 million mortgages are either in forbearance or past due, with an estimated 630,000 of those mortgages still in forbearance as of April 7.

Forbearances and seriously delinquent loans continue to decline compared to pre-pandemic levels, attributable to the strong housing market and loss mitigation activities implemented by policymakers, investors, and mortgage servicers. However, there are still pockets of borrowers who remain at high risk of losing their homes and require special attention.

In this latest monthly report, examining resolution of mortgage forbearances and delinquencies, charts reflect the first wave of mortgages that have been referred to foreclosure. To date, while they have caught up to pre-pandemic levels, consumers have not yet seen a surge of foreclosures from any backlogs. Details are also provided on the disposition of the 8.65 million mortgages that entered forbearance since the onset of the pandemic — more than three-quarters are performing or paid off. 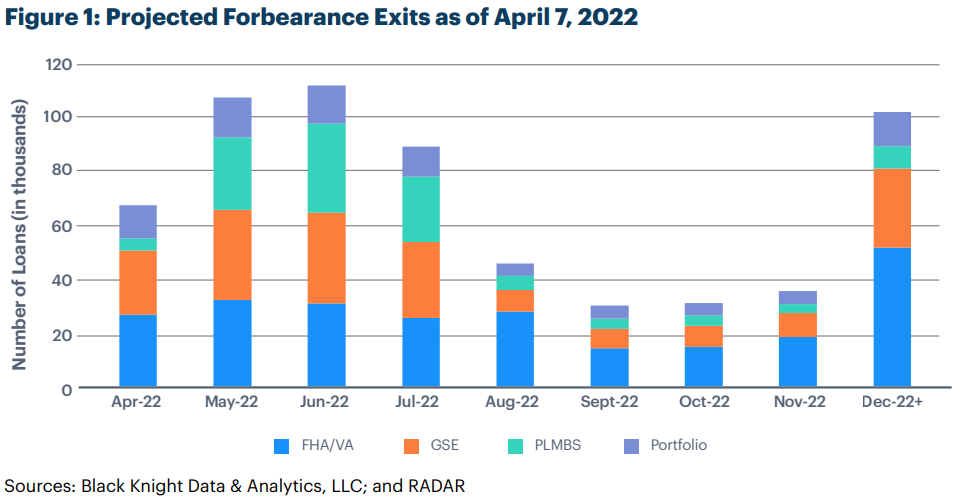 An estimated 629,714 mortgage loans remain in forbearance, including mortgages from the Federal Housing Administration (FHA), Veterans Affairs (VA), and the two government-sponsored enterprises (GSEs)—Fannie Mae and Freddie Mac—comprising almost all of the federally insured mortgages, along with the major private-sector mortgages from private-label mortgage-backed securities (PLMBS) and portfolio loans.

Note that 39% of forbearances are FHA/VA mortgages. Unless mortgage servicers can successfully execute home-retention options in the coming months, many borrowers face the prospect of selling their homes or losing them to foreclosure. The FHA/VA currently have 246,024 mortgages still in forbearance, however their business is targeted at low to moderate-income borrowers, who also have higher minority shares. 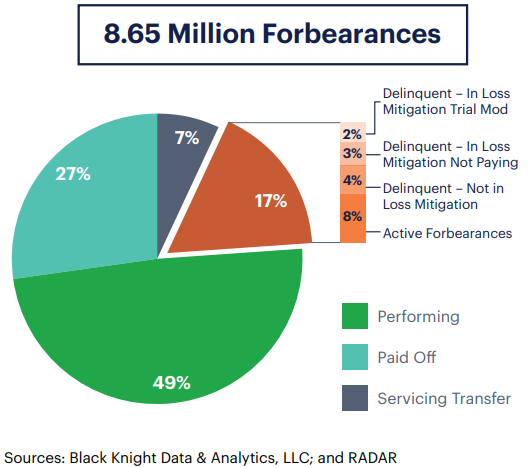 The focus of the analysis is on those borrowers who are still not paying, whether in forbearance or out of forbearance. HUD and the FHFA are offering two main home-retention options for borrowers working with their servicers:

Some 31% of borrowers have taken advantage of the first option thus far. Some borrowers will be unable—or choose not—to resume their regular mortgage payments.

Loan modifications that reduce the mortgage payment are available to these borrowers; 11% have already done so, with another 2% in transition for a modification. To achieve this, the FHFA and HUD adopted payment-reduction targets of 20% and 25%.

To assess the effectiveness of the FHFA and HUD plans for FHA loans meeting their targets,5 we calculate the average declines in principal and interest (P&I) payments and for the full mortgage payments that include escrows, generally made up of principal, interest, taxes, and insurance (PITI).

The three major federally insured programs are the GSE Flex Mod and the two FHA COVID-19 Recovery Modifications, starting with a 30-year mortgage, to be followed by one with a 40-year mortgage, which was formally announced on April 1 and expected to be available in June. Each plan meets its targets differently.

In the case of the private loans, 85% of seriously delinquent loans not in loss mitigation were originated before 2009. Because of the CARES Act foreclosure moratorium and subsequent Consumer Financial Protection Bureau (CFPB) temporary protections, foreclosure activity stopped abruptly in March 2020 for all but vacant or abandoned properties through December 2021. These protections ran out on January 1, 2022.

An important aspect of the pandemic is its uneven impact on different racial and ethnic groups. To examine these effects, we merged a sample of our servicing data from Black Knight Analytics with confidential Home Mortgage Disclosure Act (HMDA) data, in which borrower race and household income are collected at application. Some 6.9% of Black borrowers are in some past due state, the highest of any group. Hispanic borrowers have the next highest rates, above those of White or Asian borrowers.

The most recent report documents how these loss mitigation programs have performed to date and the remaining pockets of risk.