Home / Daily Dose / The Week Ahead: Examining the Climate’s Impact on Housing Infrastructure

The Week Ahead: Examining the Climate’s Impact on Housing Infrastructure 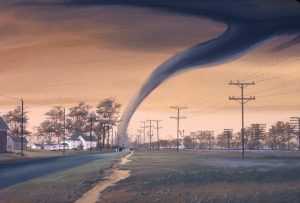 It will be a busy week for the House Financial Services Committee, as they will hold two virtual hearings dealing with the housing market.

Up first on Tuesday, May 4 at noon EDT, the Subcommittee on Housing, Community Development and Insurance will host the virtual hearing "Built to Last: Examining Housing Resilience in the Face of Climate Change." With the nation’s housing infrastructure vulnerable to the growing costs of climate and weather disasters, the need for maintenance and repair is key.

According to the U.S. Environmental Protection Agency, increases in the global average temperature are linked to “widespread changes in weather patterns,” and studies have shown that climate change caused by humans will likely lead to more frequent and intense extreme weather events. As a result, many homes in disaster-stricken areas are lost due to a lack of resilient design and poor structural siting.

The panel will chat about measures being taken to address areas vulnerable to climate change and the status of three key housing and climate related pieces of legislation, including:

On Friday, May 7 at noon EDT, the Task Force on Artificial Intelligence will host a virtual meeting, “Equitable Algorithms: How Human-Centered AI Can Address Systemic Racism and Racial Justice in Housing and Financial Services.” Advances in artificial intelligence (AI) have impacted all aspects of our daily lives. Will AI be able to close the racial divide in housing and finance industry? A panel of witnesses to be named will take a closer look at this issue and suggest remedies to the dilemma.