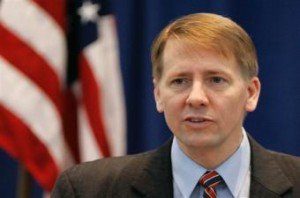 Richard Cordray, formerly the Director of the Consumer Financial Protection Bureau (CFPB), Tuesday night clinched the Democratic nomination for the governorship of Ohio. Campaigning on both his history at the CFPB and a promise to focus on economic matters affecting Ohioans, Cordray defeated five other contenders during the Ohio Democratic primary, including former Congressman and Cleveland Mayor Dennis Kucinich.

During a May 7 interview with Bloomberg Radio, Cordray said, “Having practical proposals that improve people’s economic lives is where it’s all about in Ohio, and that’s what we’re focused on.”

On the Republican side of the Ohio governor ticket, Attorney General Mike DeWine came out ahead of the other primary candidates.

Cordray has a long history in Ohio. Before his stint as head of the CFPB, Cordray served as an Attorney General, Treasurer, and Solicitor General for the Buckeye State. President Obama nominated Cordray as the first director of the CFPB in July 2011 and then installed him via a recess appointment on January 4, 2012. Cordray was officially confirmed by the Senate on July 16, 2013, by a vote of 66–34.

Cordray’s surprise resignation from the CFPB last November kicked off a period of dramatic change for the Bureau. After the announcement of his resignation, Rep. Jeb Hensarling (R-Texas), Chairman of the House Financial Services Committee, released a statement saying, "We are long overdue for new leadership at the CFPB, a rogue agency that has done more to hurt consumers than help them. The extreme overregulation it imposes on our economy leads to higher costs and less access to financial products and services, particularly for Americans with lower and middle incomes.”

Congresswoman Maxine Waters (D-California) called Cordray a “true champion for American consumers” at the time, adding, "Under his outstanding leadership, the Consumer Bureau has made the financial marketplace stronger and fairer for hardworking Americans across the country. As the first Director of the Consumer Bureau, he has overseen the implementation of much-needed rules on mortgages, prepaid cards, and payday and auto title loans, clamping down on unfair practices and ensuring that consumers are not ripped off.”

In Cordray’s resignation letter, he highlighted the work the CFPB had done during his tenure, including $12 billion in relief recovered for nearly 30 million consumers; stronger safeguards against irresponsible mortgage practices; giving people a voice by handling over 1.3 million complaints that led to problems getting fixed for vast numbers of individuals; and creating new ways to bring financial education to the public so that people can take more control over their economic lives.

On his way out, Cordray named his Chief of Staff, Leandra English, as Deputy Director of the CFPB. However, President Trump then appointed White House Budget Director Mick Mulvaney to head the CFPB. This kicked off a series of legal challenges between the two over who was the rightful leader of the organization, with Mulvaney eventually prevailing.

Mulvaney, a longtime, outspoken critic of the CFPB, has worked to shift and scale back the Bureau's focus during his tenure. With the release of the CFPB’s strategic plan for fiscal years 2018 - 2022, Mulvaney vowed to hew to the Bureau's statutory responsibilities but go "no further," explaining that "pushing the envelope in pursuit of other objectives ignores the will of the American people" and "also risks trampling upon the liberties of our citizens."

Previous: Mr. Cooper Brings the Power of AI to Homeowners
Next: How Much Home Can a Teacher Afford?