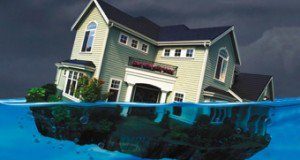 Released by ATTOM [1] Data Solutions [1] on Wednesday, the report shows a total of 77,049 foreclosure filings for April, which includes all default notices, bank repossessions, and scheduled auctions. About one in every 1,723 households was under foreclosure for the month.

But, while foreclosures on the whole may be down, repeat foreclosures are actually up—and significantly in certain parts of the country. They were highest in New York City, where 54 percent of foreclosures were repeats. Of the city’s five boroughs, Brooklyn had the biggest share.

“Foreclosure activity continued to search for a new post-recession floor in April thanks in large part to the above-par performance of mortgages originated in the past seven years,” said Daren Blomquist, SVP at ATTOM Data Solutions. “Meanwhile we are seeing an elevated share of repeat foreclosures on homeowners who often fell into default several years ago but have not been able to avoid foreclosure despite the housing recovery.”

General foreclosures were also up annually in the District of Columbia, New Jersey, Connecticut, and Massachusetts, as wells as three metro areas: St. Louis, Houston, and Boston.

Read the full report at ATTOMdata.com [2].