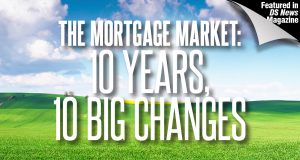 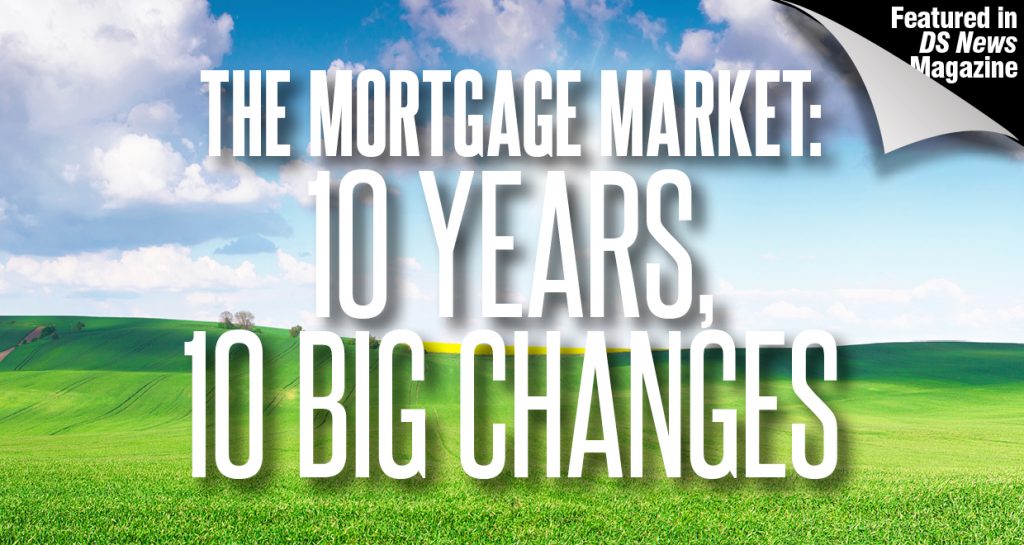 Editor’s note: This feature appeared in the May issue of DS News.

The financial crisis brought with it total devastation of capital and housing markets, the collapse of financial institutions that had survived both World Wars and the Great Depression, unprecedented regulation, bailouts, and a global contagion that decimated economies worldwide. New terms such as “quantitative easing” and “fiscal stimulus” became household phrases. The Federal Reserve slashed interest rates to lifetime lows and grew the balance sheet to $4.5 trillion at present from $870 billion in August 2007.

As mortgage and consumer servicers now look to the future, they must consider how the landscape, consumers, technology, and the markets have changed. A major piece of that is understanding how today’s average homeowner vastly differs from those pre-2008. Another major factor is the servicing industry’s preparedness for handling a significant default event, disaster, or crisis.

The Difference a Decade Makes

Ten factors have changed the market over the past decade:

1) Record Home Price Appreciation—Since hitting post-crisis lows in 2012, home prices have increased 53 percent. However, when comparing to the pre-crisis peak in 2006, home prices are up 21 percent.

Although 57 percent in seven years may seem high, keep in mind that home price appreciation is being compared to the trough of the most distressed real estate market the world has seen between 2006 and 2009. One could argue that the market was oversold, but if you back that timeframe out, you have 21 percent appreciation since 2006, averaging around 1.75 percent appreciation year-over-year (YOY). One could also argue that it is comparing to an overpriced, bloated, and propped-up market. If you were to split the difference, you still land somewhere in the range of 3 percent YOY, which is within the range of what most economists call “normal.”

2) Elevated First-Time Homebuyer Rates— First-time homebuyers have outpaced repeat homebuyers since 2008 (and every year since). Before the crisis, the opposite was true. First-time buyers comprised nearly 60 percent of homes sold in 2017. FHA owns 83 percent of that market, up from 75 percent during the crisis.

This may be one of the most important indicators of a healthy market since the crisis. First-time buyers (FTB) are facing high prices, low supply, tight credit standards, and tight incomes with low savings, but they have still been outpacing repeat homebuyers YOY since 2008. This points to the resiliency of the first-time homebuyer as well as to the fact that we have far more first-time end users and fewer speculators entering the market—another strong sign of health.

There continues to be much debate around this topic, but there’s one thing most agree on: At its peak, the market was inflated with bad loans and overstretched homeowners. Affordability is without a doubt an inhibitor today, particularly with millennials, but as shown by FTB rates and the Home Affordability Index, the “glass half full” view is that there is still more opportunity here to be realized.

4) Tight Housing Supply—Redfin reported that throughout 2018, months of housing supply remained at post-crisis lows of less than four months, with the average days on market below 50.

7) Lifetime High Home Equity—Home equity in the U.S. has increased from the pre-crisis peak in 2006 by 13 percent and is up four times from the 2009 post-crisis low to $5.8 trillion of tappable equity.

8) Highest Level of Household Debt/Lower Debt-to-Income Rates—U.S. household debt stood at $13.5 trillion as of Q4 2018, higher than the previous peak of $12.68 trillion in Q3 2008. However, the debt-to-income ratio remains below crisis/recession levels.

9) Credit Quality, Non-Agency Securities, Subprime—As of the end of 2018, the average FICO score hit a new high of 704 from a low 686 in 2009. Leading up to the crisis, issuance of private-label mortgage-backed securities had reached levels of over $1 trillion a year. Since 2008, the biggest single year was $40 billion in 2017, of which $33 billion was subprime.

10) Mortgage Delinquency Rates at 11-Year Low—Nationally, 4.1 percent of mortgages were in some stage of delinquency (30 days or more past due, including those in foreclosure) in October 2018, representing a 1 percentage point decline in the overall delinquency rate year-over-year (YOY).

Another sign of healthy post-crisis growth is that the housing market has become a smaller part of the overall economy. According to Deutsche Bank Chief Economist Torsten Slok, housing accounts for 4 percent of GDP today, down from 6.75 percent before the crisis, in part because of the supply and pent-up demand. Housing starts still remain below the level of the 1960s, when the population of the U.S. was less than 60 percent of what it is today. This demonstrates a safety net and points to a new normal. Median household income has also seen 12 percent growth since hit the post-crisis low in 2012.

Taking all the above data points into consideration, there appear to be several compensating factors that will continue to balance each other out. Home prices should gradually start to slow, housing starts will continue a gradual upward glide path to normalized levels, and, hopefully, we will continue to see increased wage growth that enables first-time homebuyers to continue to outpace repeat buyers.

I foresee more of a “soft landing,” with the potential for stagnation and pockets where new construction has outpaced demand. I believe we will experience moderate to modest declines in values as interest rates continue to rise.

How will all of this impact the way financial institutions and servicers plan and invest for the digital age of servicing? We can’t forget the rapid pace of digital change the U.S. has experienced post-crisis. The way the world interacts with each other was forever changed when Apple introduced something called the “App Store,” ushering in a whole new era of civilization.

Understanding how the macro environment has changed is imperative before considering the next step of breaking down how the customer has evolved over the last 11 years.

We can divide the new homeowner into two major groups:

The first-time homebuyer—Since 83 percent of the market is held by FHA, FICO on average runs 15 points lower. These homebuyers will be higher loan-to-value and lower income on average when comparing the GSE product. It’s important to distinguish that the risk here is unique. FHA currently has a serious delinquency (SDQ) rate of over 4 percent, while both GSEs have SDQ rates under 1 percent.

Repeat homebuyers (RHB)—There may not have ever been a time in history where this segment would be considered as resilient as they are today. Record untapped equity, record household income, quarterly net reductions in mortgage debt, and record low rates incentivizing owners to stay put. The 2018 National Association of Realtors “Profile of Home Buyers and Sellers” noted that the median age of FTB remained at 32 years and increased to 55 years for RHB from 54 in 2017.

Comparing FTB to RHB, you have two vastly different profiles, especially when considering how each of those segments prefer to engage and communicate with their financial institutions and generational tendencies in utilizing self-service and digital options.

Is there such a thing as too much of a good thing when talking about cheap money? Yes, the obvious will point to over-leveraging and inflation. There are signs of this today with household and corporate debt achieving new highs. The one I am focused on is the unintended consequence and unprecedented factor of a majority of homeowners possessing long-term fixed mortgage rates that may never be seen again. Considering that most homeowners took advantage of the post-crisis refi boom, rising rates could lead to declining existing home sales. For example, if you consider home price appreciation and mortgage rates that are 50-100 BPS higher than your existing mortgage, a $250,000 home at a 3.5 percent fixed rate that realized a modest rate of 15 percent appreciation with an interest rate of 4.5 percent would result in a 30 percent increase in a principal and interest payment.

To gauge how many homeowners today could benefit from a rate of 4.5 percent, Black Knight recently estimated that 550,000 homeowners could realize a 0.75 percent decrease in rate. The combination of home price appreciation and customers remaining in their loans longer should net a much larger amount of equity for the average household and potentially curtail existing home sales further.

This is key going forward for servicers of first liens. How will customers react to default when possessing a sizable amount of equity? How will modification rules and underwriting concerning equity impact them?

A study by the Federal Reserve Bank of New York’s Center for Microeconomic Data shows that total household debt increased by $32 billion (0.2 percent) to $13.54 trillion in Q4 2018. It was the 18th consecutive quarter with an increase, and the total is now $869 billion higher than the previous peak of $12.68 trillion in Q3 2008.

One thing to note in this report was that mortgage debt quarter-over-quarter (QOQ) saw a decline of $26 billion, while student, auto, and credit card debt all experienced increases. The flow of serious mortgage delinquency QOQ also experienced just a 1 basis point uptick to 1.19 percent.

The lack of issuance of private-label and subprime MBS in the last 11 years points to a major shift in credit and risk standards. According to Inside Mortgage Finance and eMBS, under conservatorship, the agency share of residential MBS has grown from less than 50 percent or $4 trillion in 2006 to 96 percent or $6.5 trillion in 2018. Also, the mean and median FICO scores on new purchase originations have both increased by 21 and 20 points over the last decade, while the 10th percentile of FICO scores, which represents the lower bound of creditworthiness needed to qualify for a mortgage, stood at 644 as of March 2018. Prior to the housing crisis, this threshold held steady in the low 600s, according to Urban Institute.

These trends show the emergence of a new type of consumer. Will equity preclude borrowers from loss mitigation, sparking a higher frequency of bankruptcy filings? Do modification guidelines need to be revisited to address these situations? These are some questions that servicers will need to answer to form a strong strategy moving forward.

The Next Generation of Servicing Strategies

Servicing strategies will be driven by consolidation in both the bank and nonbank sectors as mortgage volumes continue to decline and margins shrink. According to Business Insider and JPMorgan, the industry retail cost per loan has ballooned by 50 percent since 2014, jumping from $6,000 per loan to now $9,000. We will also continue to see slowing in home price appreciation and home sales until we reach stagnation or modest negative levels, at which point, I foresee regulators taking action—rates dropping and sideline buyers coming in.

The other “X factor” to consider while looking at servicing the current housing market is the yet-to-be-seen impact of the more than 200,000 homes that single-family rental real estate investment trusts (REITs) have amassed. Although it’s a relatively small slice of the pie compared to the total housing market, these REITs tend to be concentrated in certain markets.

Thus, the next generation of financial services institutions must deliver an on-demand and customized digital customer experience to remain competitive. Institutions will be judged by how they optimize their use of data, the speed in which they execute, and by the ease of use of their digital platforms/tools and user experience.