A Data-Driven Approach to Neighborhood Stabilization

Overused phrases such as “data-driven analysis” and “data-based decisions” are empty buzzwords unless individuals and institutions actually give data permission to change opinions.

There’s an opportunity to give data that opinion-shaping power when it comes to answering a specific question regarding neighborhood stabilization. If the primary goal is to stabilize the surrounding neighborhood, is it better for a distressed foreclosure property to revert back to the foreclosing lender or to be sold to a real estate investor at a foreclosure auction?

Conventional wisdom in the mortgage servicing industry has traditionally defaulted to the former: a neighborhood is better stabilized when a distressed property reverts back to the foreclosing lender. The reasoning behind this assumption? A lender is more likely to get the property back into the hands of an owner-occupant, and owner-occupants have a more vested interest in neighborhood quality and stability than do real estate investors.

However, a thorough analysis of data shows that properties sold to real estate investors at foreclosure auction more quickly convert to owner-occupancy than those that revert to lenders at the auction.

“We do see some owner-occupants buying directly at the foreclosure auction—the absolute quickest path to owner-occupancy for these distressed assets—but most owner-occupant buyers are not in a position to buy all-cash without a full property inspection,” said Jason Allnutt, CEO at Auction.com. “In this majority of cases, local real estate investors usually represent the best bridge from distress to owner-occupancy.”

The bridge from distressed property to owner-occupied property often requires eviction and extensive rehab, processes that require, time, money, and expertise that may not be the core function of mortgage servicers. The data shows that local real estate investors can perform the same eviction and rehab functions much faster, returning those distressed properties to the retail market more efficiently.

An analysis of data from both Auction.com and public record data from Collateral Analytics demonstrates this trend based on an analysis of more than 19,000 properties brought to foreclosure auction in the three months ending in February 2018. A year later, properties that sold to third-party investors had resold in an average of 193 days, while properties that reverted back to the foreclosing lender at the auction had resold in an average of 221 days. That means it took lenders about a month longer to resell than it did real estate investors. 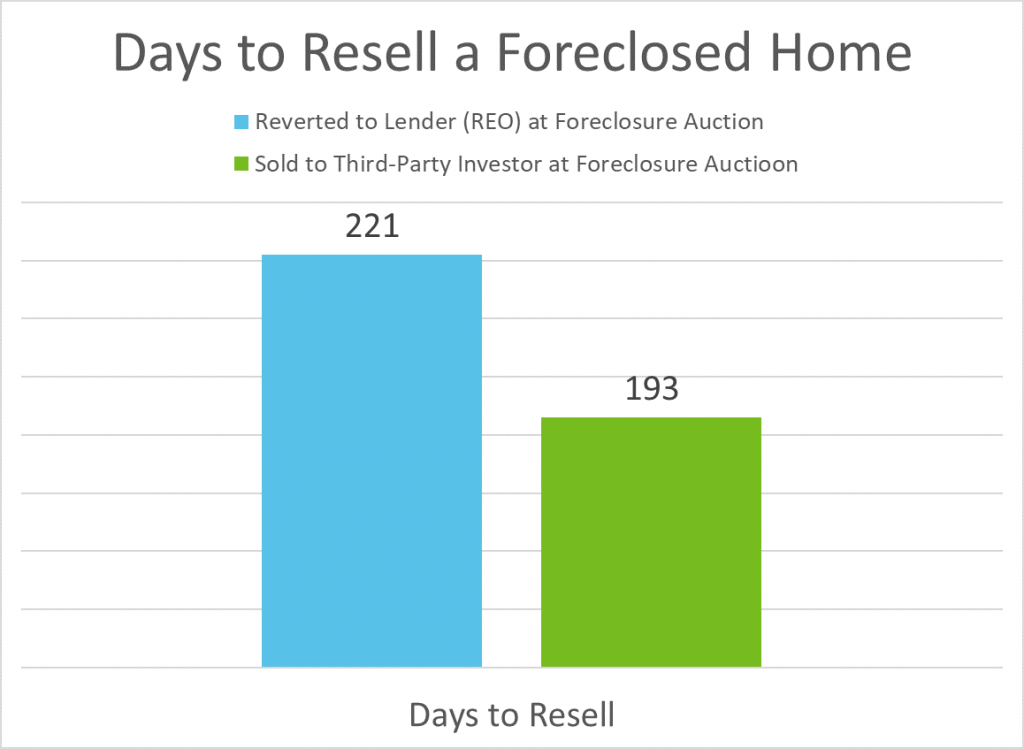 Furthermore, investors who don’t resell within a year are still returning the home to retail more quickly, but as a rental rather than a resale. In many cases, that rental may be to the former homeowner, which also helps to stabilize the neighborhood.

“You are better off selling it quickly to a cash buyer, who is usually able to completely renovate it within three months and either sell it to an end-user or rent it,” said Josh Cantwell, CEO of Freeland Lending, a Cleveland, Ohio-based company that lends money to home flippers. Cantwell noted that investors are motivated to perform “residential redevelopment” as quickly as possible in order to provide the best return. “You are under the pressure of creating a return. When you’re under the pressure of creating an ROI you are going to work really hard to put that property back in service.”

However, the time to resell after foreclosure auction is not the whole story. A foreclosed home often has a longer journey beyond just the initial resale before it finally returns to the retail market—particularly when it comes to homes that go down the REO path.

Among nearly 7,000 properties that reverted back to the lender in the three months ending in February 2018 and then subsequently resold, only 48% were owner-occupied one year later, according to an analysis of Auction.com and Collateral Analytics data. By contrast, 74% of properties that sold to third-party investors at the foreclosure auction and then subsequently resold were owner-occupied one year later.

The 52% of reverted assets that sold to nonowner-occupants (investors) will take about 171 additional days (the average time it takes an investor to rehab and resell even without listing for sale) to get into the hands of an owner-occupant. That means the entire timeline, from foreclosure to owner-occupancy, for those properties is around 392 day—199 days longer than it takes for the majority of third-party purchases to return to owner-occupancy.

While the owner-occupancy rate is not the only measure of a stabilized neighborhood, it’s an important one. By that measure, neighborhood stabilization is more quickly and comprehensively being achieved through sales to third-party foreclosure buyers than it is through lender repossessions. 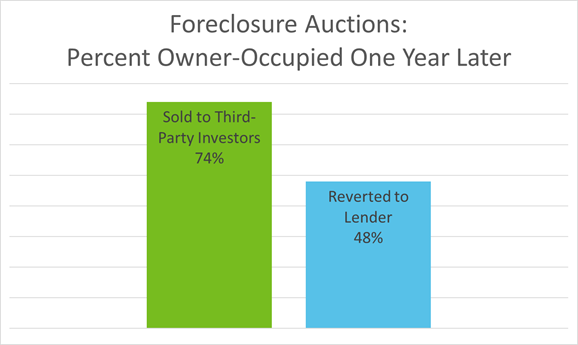 Time Is the Enemy of Stabilization

The longer a property takes to get into the hands of an owner-occupant or a tenant, the longer that property will be sitting vacant. Vacant properties also pose the most danger to destabilizing a neighborhood, according to James Rokakis, former Cuyahoga County, Ohio, Treasurer and Director of the Western Reserve Land Conservancy, an organization that focuses on transforming vacant, unsafe, and unproductive properties throughout Ohio into useful ones.

“We want these properties as quickly as possible repurposed,” said Rokakis, who helped launch the Cuyahoga County Land Bank, which became a model for more than 50 land banks throughout the state. “The longer a property remains vacant, the more likely it is that that property will be vandalized.”