The Importance of Assessing Weather-Related Risk

Hurricane season 2020 broke records, with named storms such as Hurricane Laura delivering the most intense hit to the northwestern Gulf Coast since 1856 and Delta ravaging a similar path mere weeks later—and those account for but a fraction of the estimated $7.8 billion in hurricane damage in America last year.

The record-busting season combined with increasing climate-change-related risks to residences has insurers, governments, and investment-property owners thinking of new ways to mitigate hazard and make neighborhoods more resilient, according to property-data provider CoreLogic, which Wednesday hosted a webinar entitled, "The Winds of Change: What We Can Expect From the 2021 Hurricane Season."

Moderator Maiclaire Bolton Smith, Senior Leader, Research and Content at CoreLogic, and a panel of experts examined weather, climate change, and property damage during the 2020 season and looked at the 2021 forecast.

They discussed anticipating hurricane risk with catastrophe models and presented compelling reasons why financial institutions should care and remain informed about weather- and climate-related risk.

"Based on data from NOAA over the past four decades we've seen a 70% to 90% increase every decade in the total inflation-adjusted losses from weather events in the U.S., Bolton Smith said. "And this trend isn't slowing down, and this is why it's more important than ever to know your risk to help accelerate your recovery."

Battan pointed to the National Oceanic and Atmospheric Administration (NOAA) as a source of storm data, noting that it tracks the number of billion-dollar storms every year.

"Last year, we saw $7.8 billion hurricane tropical storm events in the U.S., which was, by far, a record," he said. "Just to give a little context, that's the same number of events we've had the last three years, combined."

Jeffrey discussed storm surge, one of the most vexing aspects of a hurricane, the panelists agreed.

"Storm surge flooding [along with wind] really is one of the two major threats to life and property that's posed by hurricanes," he said.

"One thing I think is critical to mention here is that storm surge is not limited to that 100-year flood zone that we all keep talking about. It's a situation where you can have even low-level storms that push a lot of water inland," Jeffrey said. "So the 100-year flood zone certainly is viable when you start to consider what is the threat for many storms, but in other cases, you can have surge water that flows beyond that and I think that becomes apparent when we start listening to the survivors and some of the storms, saying they just never knew that they were had the potential to have their properties flooded."

Yerkes uses charts and maps to demonstrated how professionals can use data and tracking to help them understand property damage risk.

Gallagher explained why he believes this understanding is vital for banks, borrowers, and whole communities: "We've already established that 2020 and previous years have been record-breaking financial impacts across many communities. I summarize this as a key reminder we cannot overlook the human impact and community impact that devastating hurricanes and other natural disasters have on borrowers homeowners and the communities they live in."

He points out that spikes in delinquencies are common and somewhat expected when federally declared disasters occur. 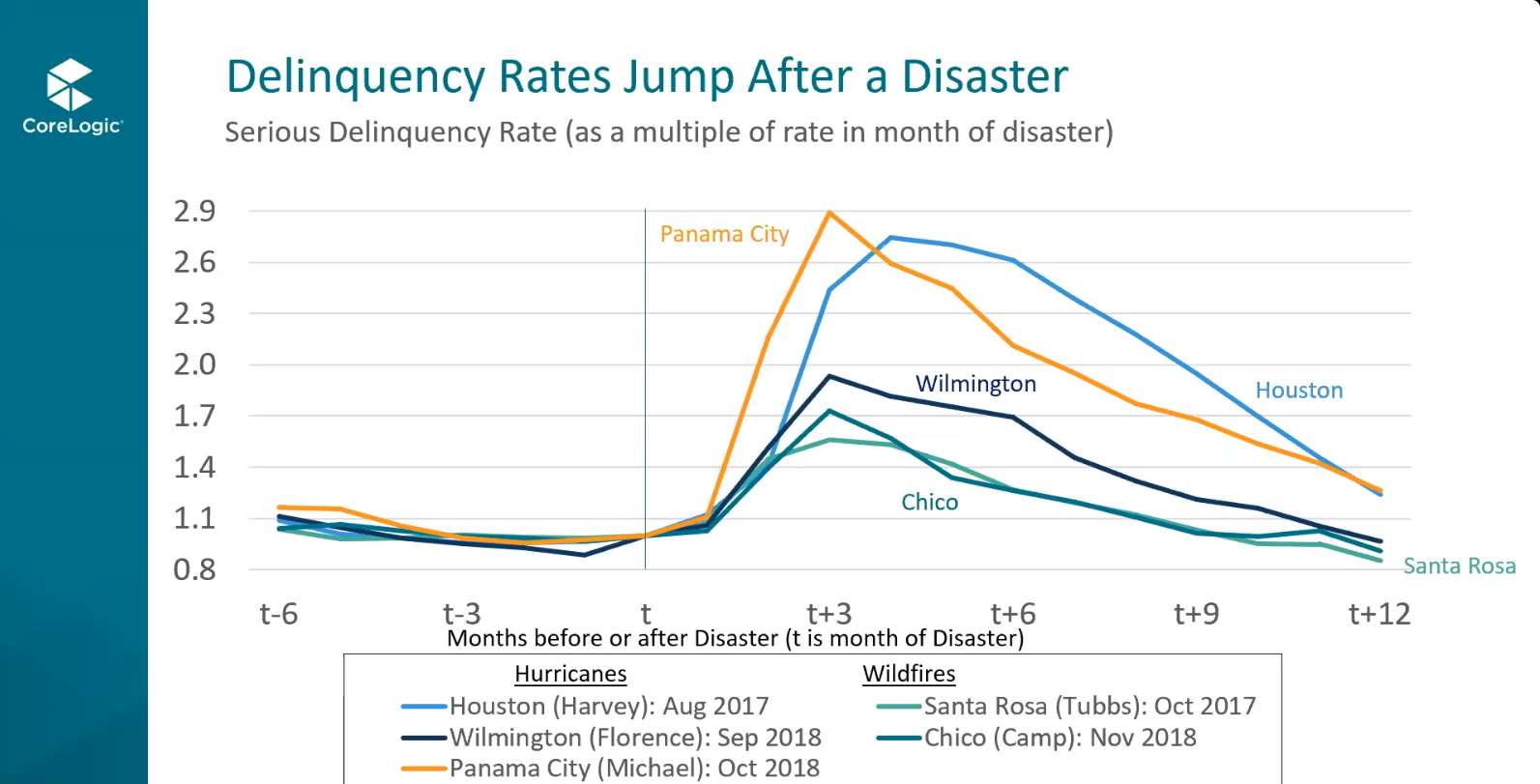 CoreLogic next Tuesday will release its 2021 hurricane report, which will include detailed information on winter storm surge hazards along the Atlantic and Gulf  Coast. That's important, according to the CoreLogic team, because nearly one-fifth of the U.S. population lives in the county that borders either the Gulf or Atlantic.

The full webinar is available here.