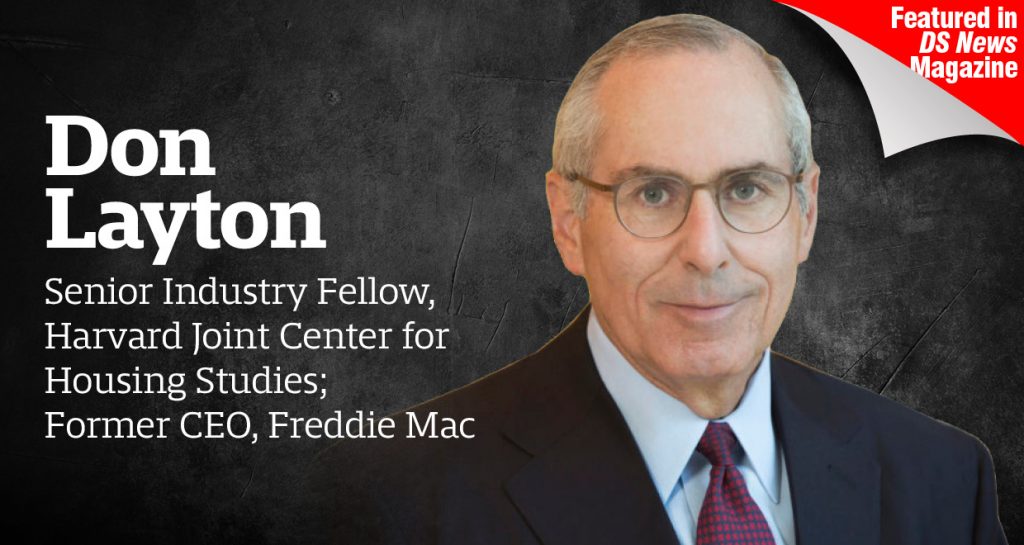 With more than 40 years experience in the financial services industry, Don Layton was most recently the CEO of Freddie Mac from 2012 to 2019. Prior to joining Freddie Mac, he was the Vice Chairman of JP Morgan Chase and also the chairman and CEO of E-Trade Financial. Layton now serves as a senior industry fellow at the Harvard Joint Center for Housing Studies.

What are some of the biggest concerns you have for the mortgage market?

In watching the mortgage market, I've divided my concerns up into three categories. First is the trading liquidity, which was really stressed for a while. Second more of a month's timeframe is the issue of non-bank mortgage servicers having enough cash to advance funds under all the forbearance programs. And third is several years long probably, is the credit quality of all the mortgage lenders, along with what might happen to house prices. We could have very high credit losses, which would have impacts on all the banks that own mortgages and the GSEs and FHA and the mortgage insurers.

What are your thoughts on the Fed's efforts to try and stabilize the mortgage securities market?

First, I think you have to understand what the Fed's objectives are. There seems to be some confusion on that. They want to try to reestablish trading liquidity, sp you can do reasonable buys and sells at a price that is generally reflective of some kind of reasonable economics. It is not going to return to the exact liquidity and the exact prices before this all started.

I tend to focus on agency MBS, which is the highest quality, and even that was heavily stressed for trading liquidity back a few weeks ago. Purchase interventions have helped that market. There were rumors some REITs were within days of maybe going under. That market has quieted down. The Fed's still supporting it although they're off their peaks of how much they purchase.

How is the government handling the liquidity shortfalls brought on by mortgage forbearance programs?

This is about policy and it's also about politics, and there's a lot of public relations and lobbying going on. Basically the mortgage servicing industry has forecast a 25% forbearance rate, which is a relatively high estimate. If that comes true, then servicers, especially non-bank servicers, will be under tremendous stress to have the liquidity to fund P&I advances. Based on that, the industry went and tried to construct a solution.

They wanted a giant Fed line that would cover not just the forbearance P&I, but many other types of liquidity drains on the servicers.

The government, meanwhile, didn't do a great job articulating a strategy and communicating about it all. They had some missteps, but at this point they havecome into a plan that basically has three components.

Number one, the mortgage servicers should try to get their own sources for private capital. They should really work hard at this and they should be willing to pay up for expensive liquidity if necessary. As a government backstop, there are two programs. Ginnie Mae put one in, and it's considered an extraordinary program. It will finance the P&I advances associated with their loans.

It does have what I'll call “bailout conditions.” The most important of these being that anyone takes those funds, they cannot withdraw dividends or other profits from the businesses until the government's paid off. The government wants cash flow to go to them first, owners second. Then the GSEs came in and the FHFA announced a program that they've capped their principal interest payments at four months, which at least gives them a limit of modest size.

The belief by the government in all this is that throw all three components in and things should work out okay. There won't be some broad collapse in mortgage servicing. But the nature of this program is that you're not sure how it's all going to work out because you don't know how big forbearances are, but it moves slowly enough, a month or two at a time that they'll come in and adjust if necessary is the tone you get.

Previous: Mortgage Servicers on the Wrong End of CARES Act
Next: How Lockdowns are Hurting the Banking System