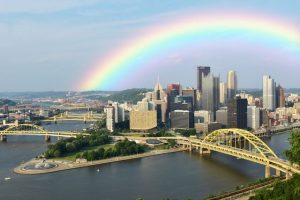 One of President Joe Biden's first executive orders involved banning discrimination against members of the LGBTQ+ community, making it illegal, on a federal level to deny homes or mortgages to anyone based on their sexual orientation or gender identity.

And, while housing discrimination based on "race, color, religion, sex, familial status, or national origin" has long been illegal under 1968's Fair Housing Act, the Department of Housing and Urban Development (HUD) , on the heels of Biden's order, effectively added, "housing discrimination based on gender identity or sexual orientation" to the type of complaints it will investigate, act upon, and apply funds toward.

While progress is occurring nationwide, some cities and neighborhoods appear better equipped to offer a better living situation to LGBTQ+ homeowners, according to a June, Pride month, a study by Realtor.com, which suggests places such as Pittsburg, Pennsylvania, Atlanta, Georgia, and Austin, Texas are most likely to offer what one agent calls "an equitable experience."

"And with home prices rising just about everywhere," Cox noted, "it’s more important than ever to find places that are not only gay-friendly but also budget-friendly."

So the data team says they sought out the nation’s most affordable "gay meccas."

They came up with, 1. Pittsburg, Pennsylvania—the median home price is about $300,000 and, as Brian Larson, a sales specialist with Coldwell Banker Real Estate in Pittsburgh sees it, the Showtime series Queer as Folk "put Pittsburg on the gay map."

"Since then, our pride festivals have grown year over year into something that has really kind of been a destination.”

Recently, Larson says, he has worked with transplants from Los Angeles and other people who can work from anywhere.

They “are finding places like Pittsburgh where they can actually have quite a lavish lifestyle as far as homes go compared to other markets like San Francisco,” Larson tells Realtor.com.

2. Providence, Rhode Island—the median home price is also about $300,000, and though the city is home to fewer than 200,000 people, "it still has a thriving gay scene," reported Realtor.com. "The artsy, college town is home to Brown University and the Rhode Island School of Design. Bars serving the LGBTQ community are located downtown, though there are more to choose from throughout the city," according to the authors of the study.

Interested house hunters can find a three-bed, 1.5-bath Colonial in the desirable Broadway-Armory Historic District, west of downtown, for under $400,000, say agents who work the area.

3. Virginia Beach, Virginia—the median list price is about $337,000, and much of its economy based on the tourism industry. Reportedly, it has plenty of historic sites, three military bases, a plethora of restaurants and bars, and a growing LGBTQ+ community.

"While there’s no designated gayborhood in Virginia Beach, the ViBe Creative District is an artsy cultural hub," wrote Cox. "Because of its proximity to the ocean, real estate here can get a bit pricey."

4. Fort Lauderdale, Florida—the median listed home price is about $350,000, and this city is known for one of the highest concentrations of same-sex couples in the country, Cox wrote, "along with its lower-profile neighbor Wilton Manors, our No. 1 most LGBTQ-friendly city last year. Combined, the two cities have more than 200 gay-owned hotels, restaurants, bars, and shops, according to the state’s tourism bureau, and more than 1 million LGBTQ travelers visit every year."

5. Madison, Wisconsin—the median price of a home is $350,000, and, as the Realtor.com author puts it, "the highly educated and progressive city is one of the gay-friendliest in the Midwest."

She notes that "popular neighborhoods for LGBTQ people are in Middleton, a few miles west of downtown Madison. It offers a mix of urban amenities with a suburban feel. A four-bedroom, two-bath midcentury home here costs about $400,000."

According to a report last month by Freddie Mac and the LGBTQ+ Real Estate Alliance, an organization of real estate professionals, safety and an accepting community are two of the most important considerations for LGBTQ+ homebuyers.

"You don’t [want] to walk out your door and go into a world that’s abrasive and wants to judge you."

The researchers at Realtor.com point out that members of the LGBTQ community are still less likely to own a home.

Only about half are homeowners compared with about 65% of the general population, according to the aforementioned Freddie Mac report. That number is even lower for LGBTQ people of color, who are more likely to experience housing discrimination.

The full Realtor.com list including methodology is available at Realtor.com/news.

Previous: Exploring Alternatives to Foreclosure
Next: Ginnie Mae Reports 288,000-Plus Homes Financed in May