Home / Daily Dose / On the Horizon: Insights From the JCHS 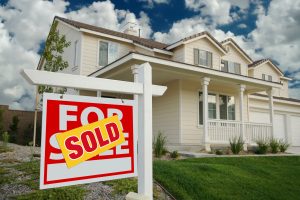 2021 was a notable year on many fronts—the housing market broke records like toothpicks throughout the year and shattered others that stood for years, if not decades, as every month and every quarter brought new data from the breach.

But the record breaking year that was 2021 seems to be a one-off performance as the market in 2022 is seeing mortgage rates creep up compounded with record-high prices which is causing its own affordability issues.

According to the Joint Center for Housing Studies at Harvard University (JCHS) some consumers will see relief in the housing market in 2022, while those in already disadvantaged positions may actually see their situation worsen due to the rising cost of food, fuel, and commodities.

The soaring costs of housing 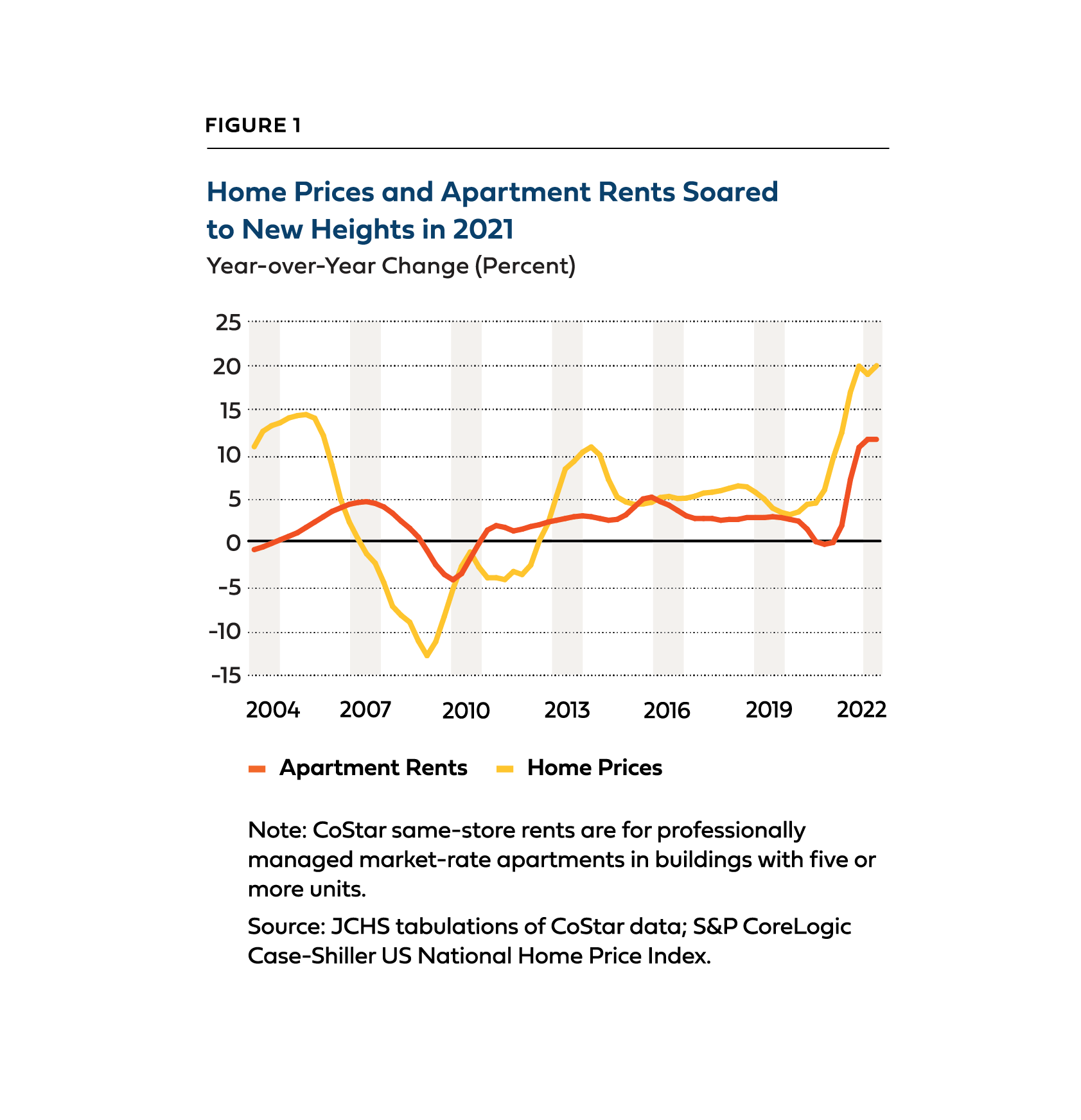 The cost of housing, in both the rental and purchase markets, has done nothing but climb since the pandemic came to our shores early in 2020. Home price appreciation is set to hit 20.6% in March 2022, marking its largest jump in 30 years, and is expected to keep rising as 67 of the top 100 housing markets are experiencing record-high appreciation rates.

On the other hand, renters will be granted no quarter either in the short term as rents shot up 12% in just the first quarter of 2022. Further, several areas saw rents soar over 20% in the same three-month period.

“Rents for single-family homes rose even faster, pushed up by increasing demand for more living space among households able to work remotely,” says Daniel McCue, a Senior Research Associate at the Center. “Adding to the pressure, investors moved aggressively into the single-family market over the past year, buying up moderately priced homes either to convert to rental or upgrade for resale.”

Housing demand on the rise

Household growth among generational groups has remained strong throughout the pandemic which was one reason the market saw a sharp rise in housing costs starting last year.

Millennials, with the oldest among them now entering their prime homebuying years, contributed for the majority of the jump as in total, adults under 45 claimed an additional 400,000 units in the past five years.

On the other end of the spectrum, the market is seeing older Americans that are opting to renovate their houses to make them more accessible in their advancing age, rather than downsizing or moving to a senior-based community.

“Over the long term, though, housing demand is set to decline dramatically; population growth, the primary driver of household growth, is now at a 100-year low as birth rates have fallen, death rates have risen, and immigration has slowed to a trickle,” the JCHS said. 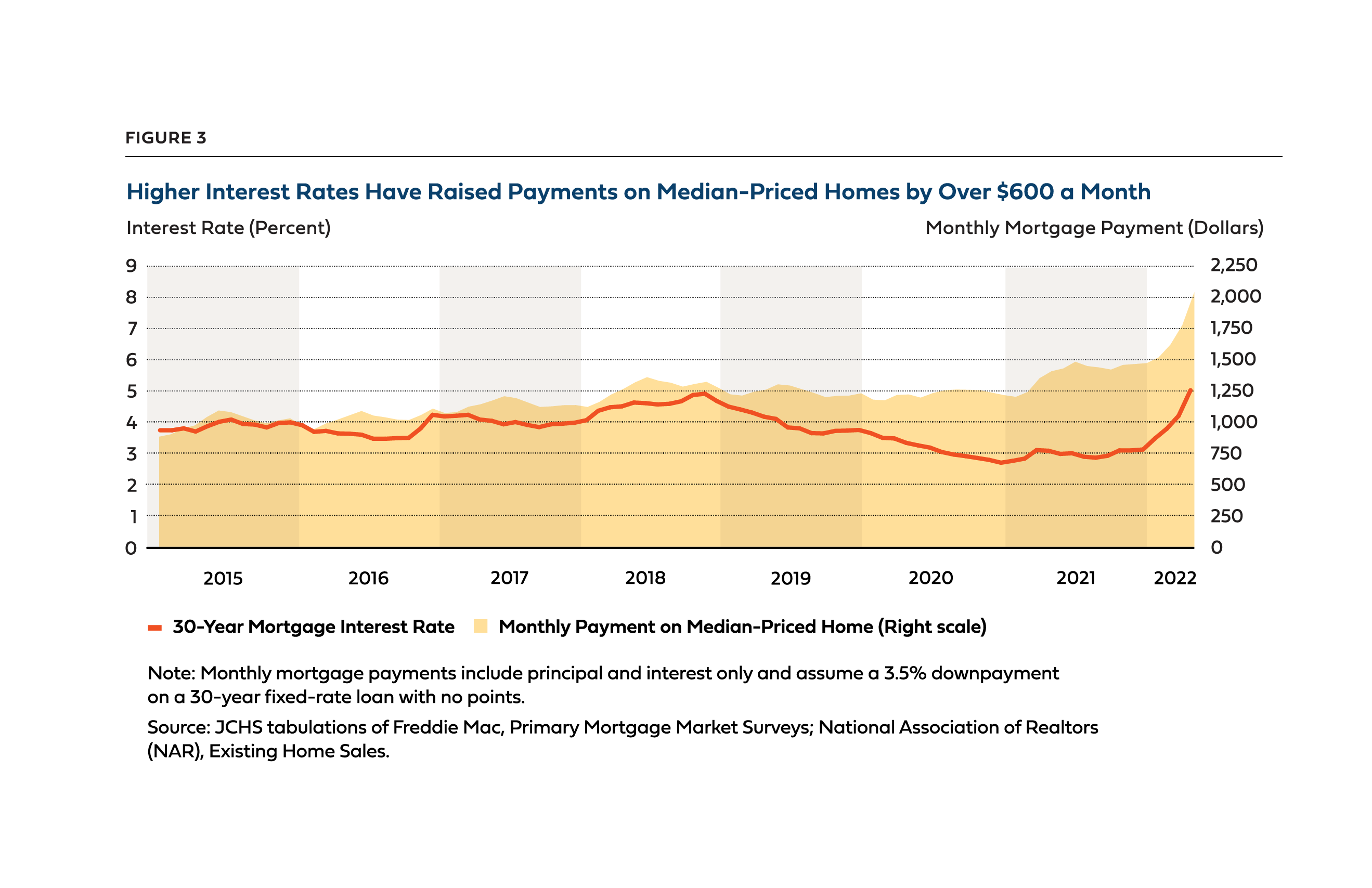 First-time homebuyers, who usually have the least amount of assets available to them, are being taken from the oven to the frying pan as more and more is being demanded from them financially to get into their initial home.

Interest rates are rising, and according to the Federal Reserve, are not going to stop rising anytime soon. Rising home prices are intrinsically related to down payments, which are also becoming more expensive. All-in-all, the report found that payments on a median home are now $600 more than they started at last year.

“At today’s prices, the typical down payment that a first-time buyer would need for a median-priced home is $27,400,” says Alexander Hermann, a Senior Research Analyst at the JCHS. “Without help from family or other sources, this would rule out 92% of renters, whose median savings are just $1,500.”

The rapid surge in home prices has only widened the wealth gap between homeowners and renters. Before the pandemic in 2019, the median wealth of a homeowner household was $254,900, a number that is 40 times higher than renters wealth which stood at $6,270. These gains were primarily missed out on by minorities.

The number of people now paying above the standard 30% of their income on housing is also increasing.

Housing construction at a new high

One bright spot is that residential construction has finally picked up. There were 1.1 million single-family starts in 2021, exceeding the 1 million mark for the first time since the Great Recession. Multifamily starts are also at a 30 year high, but the news is not all good: supply chain delays have lengthened the time it takes to complete a unit, leaving some 1.64 million homes still under construction as of April 2022 (the highest since 1973).

The JCHS says that along with climbing interest rates, the strong pipeline of new homes should help to slow the rise in home prices and rents.

The outlook for housing

Despite all the pain points, the near-term outlook for housing demand yet remains positive. But housing demand hinges directly on the ability of the Biden Administration and the Federal Reserve to successfully cool inflation without overdoing it and sending the economy into a recession.

“There is also the longstanding challenge of producing affordable homes, given the high cost of building materials and land as well as the shortage of labor,” says Chris Herbert, Managing Director of JCHS. “The lessons learned during the pandemic have led to a number of proposals to greatly expand the housing safety net and provide increased support for first-generation homebuyers. While these measures have yet to be implemented, it is important to continue the policy debate over the best approaches to making housing affordable for all.”