Nearly 40% of Utah Homes at Risk of Wildfire

With the start of this year's fire season coinciding with a historic drought and record-breaking heat waves plaguing dozens of Western cities, two of every five homes (39.4%) in Utah face high fire risk, according to a new report from Redfin, a larger share than any other Western U.S. state. Colorado and Idaho came in second and third place, with 19% and 14.4% of properties at high risk, respectively. Less than 10% of homes in the following states have high risk: Oregon, Nevada, California, Washington, and Arizona.

Redfin focuses on eight of the 11 states in the contiguous U.S. West in its analysis: Arizona, California, Colorado, Idaho, Nevada, Oregon, Utah, and Washington. The remaining three—Montana, Wyoming, and New Mexico—were excluded due to insufficient data.

Utah has been growing faster than any other U.S. state, with a population that surged 18.4% to 3.3 million from 2010 to 2020. Idaho, which also faces substantial fire risk, came in second place. More than a third (35.7%) of Redfin.com home searches in the Salt Lake City metropolitan area came from outside of the metro in Q1, up from 26.8% a year earlier.

While Utah doesn't rank at the top of the list in terms of number of fires or acreage burned, it has a relatively high share of properties at risk—likely because the state's most populous cities overlap with its most at-risk areas. Much of the state's high fire risk lies in and around Salt Lake City, West Valley City and Provo—Utah's three largest cities. By comparison, only one of Washington's three most populous cities—Spokane—overlaps with substantial fire risk. 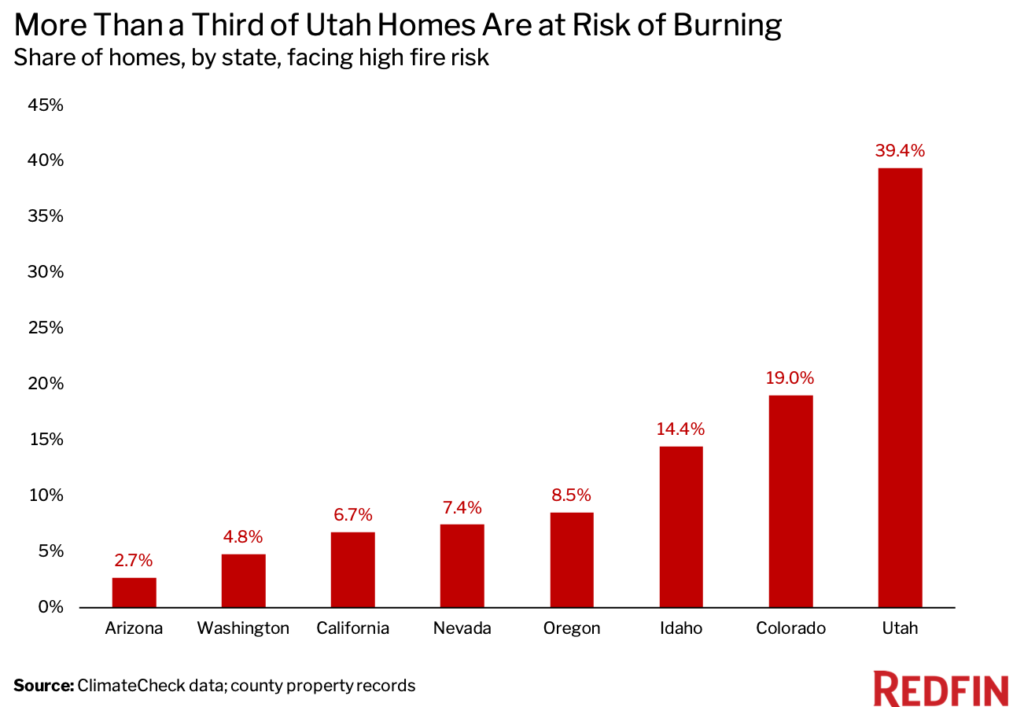 "Salt Lake City proper is relatively insulated from fires because it's located in a valley, but much of the mountainous area surrounding it—especially the Wasatch Range to the east and the north—is covered with dry vegetation that's prone to burning. A lot of people live in these mountains or right up against them," said Ryan Aycock, Redfin's Market Manager in Salt Lake City. "Many of the homes in Wasatch Range are farm communities or cabins, but there are also luxury homes at risk in Park City, a resort town that's been very popular during the pandemic. Park City is a mix of vacation and primary homes, but we've recently seen an increase of families coming in from Seattle, California, and New York to buy primary homes because they can work from anywhere and want to be near great skiing and hiking."

While Utah has the largest share of properties with high fire risk, California has the most property value in danger, with $628 billion worth of homes facing high fire risk, due to the fact that home values in California are relatively high. By comparison, Utah and Colorado have about $220 billion of homes with high risk, and the remaining states in this analysis have less than $75 billion of property at risk.

"Sellers who are in the market right now are rushing to get under contract because they know buyers may start rethinking their decisions when fire season worsens," said Christopher Anderson, a Redfin Real Estate Agent in Napa, California. "But the truth of the matter is that once fire season ends, much of the fear fades away. We've seen a lot of people leave the area as wildfires have intensified, but they're always replaced by new people who are willing to take the risk. Buyers do tend to have a preference for homes that have been fortified against fires because that means there's one less task they have to deal with." 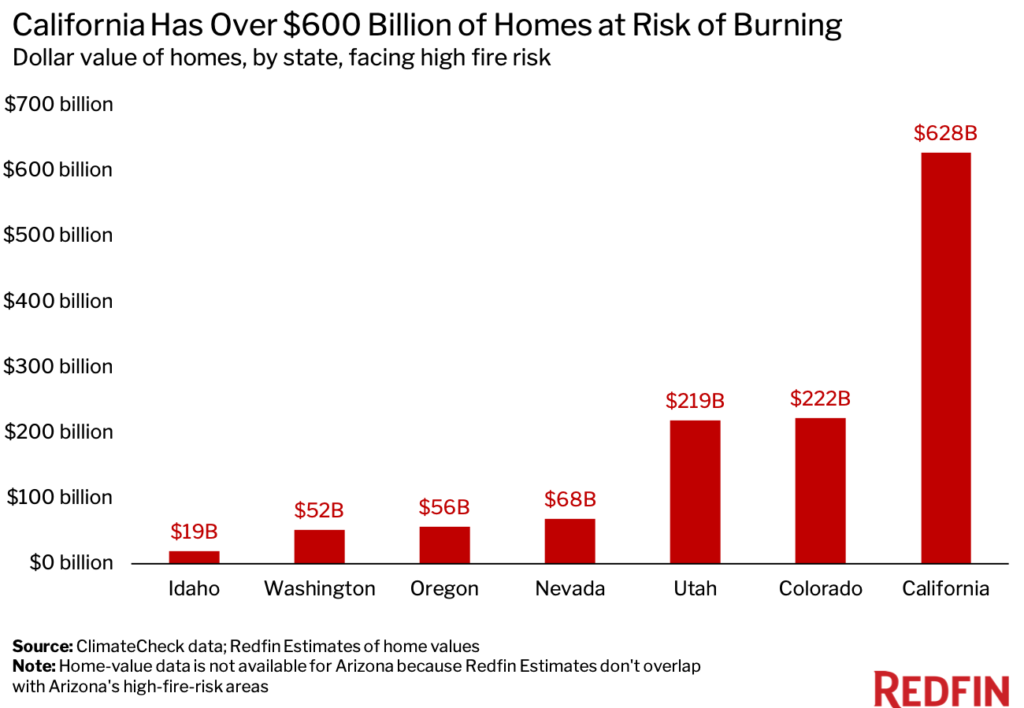