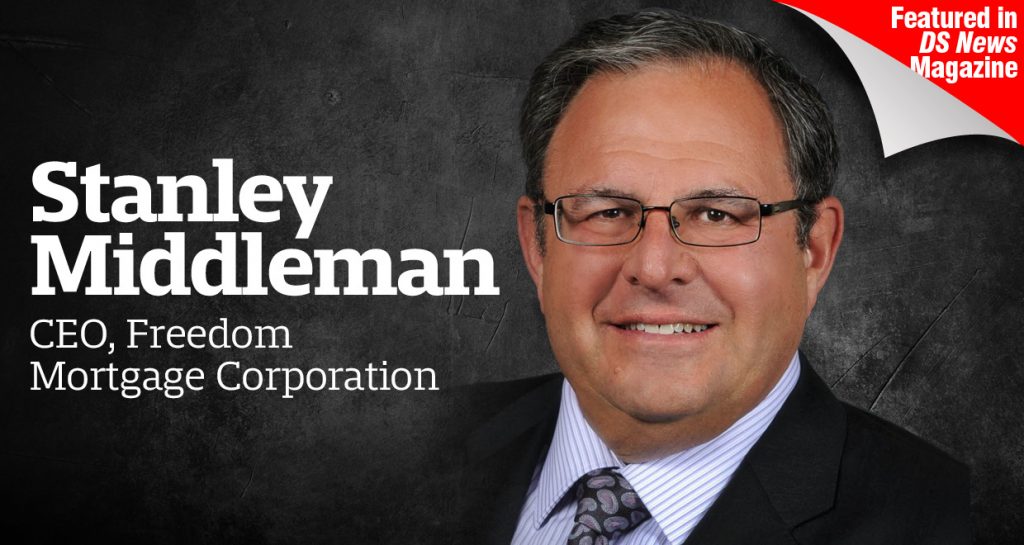 Stanley Middleman is the CEO of Freedom Mortgage Corporation and founded the company in 1990. Following the Great Recession, he was able to transform his company into a market leader in VA mortgages and government insured lending. Employing more than 4,000 people in all 50 states, in 2019 Stanley was the recipient of the Ernst and Young Entrepreneur of the Year, Greater Philadelphia Award, financial services category.

How can the mortgage industry best assist homeowners coming out of forbearance?

First of all, we’ve been able to help, I guess, in excess of 85,000 consumers defer their payments or be eligible to defer their payments as a result of this COVID-19. And it’s really interesting to see what kind of people live in this country. People that have government loans are the primary participants in this, and even those consumers that have had the challenges around this disease, which is just awful, most of them, or many of them at least, continue to pay and may not even need the forbearance. So for those consumers that are eligible, applied, and were granted forbearance, and the bar was clearly low, it was easy to take advantage of, but a lot of people didn’t take advantage of it. And it was really on the honor system.

To see so many people be able to make their payments, it really restored my faith in humankind. For those people that did take advantage of it and really needed the help, and where it’s become an important tool in managing their own personal financial environment, there’s a lot of options as we come off of forbearance. Some of the tools have not been completely refined by places like HUD, for the FHA and the VA and USDA. The final rules are not placed, but essentially what happens is when forbearance ends, the consumer has basically three things that can happen. One, they can obviously pay all their money back and just go on with their lives, and for most people that didn’t take it at all, it’ll be like it never happened.

The second thing that could happen is that we could modify their loan, and it just becomes part of their new loan at a lower interest rate, and we go through the normal waterfall of events. Another thing that could happen is that that loan amount, whatever it was that was deferred, gets added onto the end of the loan, and then at the end of the loan, interest free. And then that loan will come due, as stipulated in the CARES Act. Now, exactly how that all happens and the rules that have not been released by the FHA, it’s not as clear yet, but that’s the way it would work for a conforming loan. And each loan type is going to be different, each investible habits, on site guidelines. And we’re obviously going to follow all the rules, but that’s fundamentally what would happen.

I think that by and large, many of these people will either refi or get a modification, depending on the tools that are at our disposal. And what that’ll do is it’ll put a consumer even in a better situation, because they’ll be able to get their interest rate lower. And at the end of the day, it’ll feel like this didn’t even happen. So it’s very encouraging, sitting in my seat, knowing that we’ve helped so many people through this crisis, and at the same time have helped them resolve their issues and get into a better financial situation than they otherwise might’ve been.

In what ways is the current economic downturn different from the Great Recession?

One big reason, but a couple of other smaller reasons. But I think that the focus should be on the asset, the underlying asset, particularly in terms of the mortgage industry, and housing in particular. When we think about the Great Recession, we were in a period of hyperactivity, where the values of homes had gone up dramatically, and the values of those properties were probably a little over inflated. We were coming off of a prolonged period of growth that saw the values of these homes go way up, and way up relative to the previous peak. And when that happens, you are due for a market correction.

We had a major recession and a major asset evaluation, which happened almost instantly. So even before the recession had kicked into gear, these property values had gone up and started to de-value, which kind of snowballed and led us into the recession. Probably people that shouldn’t have been buying homes were buying homes. People that shouldn’t have been investing in properties were investing in properties. When we look at today’s environment, we have, instead of a glut of available properties and excess housing, we have a shortage of housing. That shortage of housing and the scarcity in the marketplace really is driving the values of the properties that we don’t see going down across the board.

Clearly there are pockets that were affected by the various changes in income tax, deductibility of state taxes, and such, but by and large the values of properties have stayed very stable.

The anticipation from my chair is that they’re going to go up in value. And that’s quite different from what happened in housing during the Great Recession. So when the underlying asset is stable, and the scarcity of that asset and the demand for that asset is still great, that bodes well for the value of the key asset and the entire food chain, whether it’s lending or building or real estate sales. The underlying value of the home is really strong, and that’s the number one difference. We’ve had great credit. We’re coming off of one of the greatest credit qualities in the history of our country. Loans have performed better than they’ve ever performed before for an extended period of time. We experienced new lows and delinquency until we got to this point. So all of these things are happening after an incredibly strong run and credit environment.

The reality is, I think that the value of these properties are not only going to hold, but they’re going to grow. And that’s how housing is going to lead us out of this recession. That’s how, when people get back to work, and they have their income supported, and they resolve whatever hiccups they may have faced as a result of this horrible, horrible tragedy, then you pile on top of the pandemic the social unrest, which I just want to touch on for a second. Clearly I empathize with all those folks and their feelings and their frustrations, but when you pile that on top of this pandemic and the reality of what’s happening in our society, it’s important that we have good solutions. And one is to make sure that the entire population is heard, and all their issues are felt and shared, and that when we solve these problems, we solve these problems for everybody.

So that’s why things like government lending and equal opportunity housing and building strong communities is really important. And that’s what’s going to happen this time. And that’s really different from what happened last time. Instead of going around and having a lot of foreclosed, boarded up homes, where the properties and the community suffered, and I don’t think were able to recover, and I think that leads to all kinds of problems, drugs, and crime, and all that stuff. I think we’re going to have stronger communities. I think we’re going to have stronger property values. I think we’re going to have more home ownership, and this is going to be great. And if we can have a society where everybody treats everybody like they want to be treated themselves, and everybody’s treated as a person, rather than as this or as that, or another thing, I think we have a chance to be special and do special things.

I’m really excited and optimistic for our society, for the economy, and for the future of everybody that lives here in this country, because I think the opportunities are there and how we choose to take advantage of them will dictate the outcome. But my hope is, and my prayers are, that we live in a fairer and a more congenial manner, where everybody’s feelings and lives are treated evenly and fairly, and that there is no distinction between any people, that everybody gets treated as a person, rather than as this kind of person, or that kind of person. And that’s what my hope would be.

The good news is, is in housing, we do that. And I’m really proud of being able to be one of the top government lenders that really admires and drives diversity as part of what we do on a daily basis. Supporting the VA and the FHA, providing the people that are a little underserved and that require special service, and that demand special respect, is one of the keys to our culture and to the way we see the world, and I’m looking forward to doing even more of that. I’m really excited about the prospects in the coming year.