For the first six months of 2021, there are a reported 65,082 foreclosure filings—default notices, scheduled auctions, or bank repossessions—on residential properties nationwide, according to ATTOM and RealtyTrac's Midyear 2021 U.S. Foreclosure Market Report. Foreclosures, today at .05% of all housing units, are down 61% from the same period a year ago and down 78% from the same time period in 2019.

The record-low foreclosure rate can be attributed to government-agency actions, federally and locally, to prevent the loss of homes during the coronavirus pandemic.

"The government’s foreclosure moratorium and mortgage forbearance program have created an unprecedented situation—historically high numbers of seriously delinquent loans and historically low levels of foreclosure activity," said Rick Sharga, EVP of RealtyTrac, an ATTOM company. “With the moratorium scheduled to end on July 31, and half of the remaining borrowers in forbearance scheduled to exit that program over the next six months, we should start to get a more accurate read on the level of financial distress the pandemic has caused for homeowners across the country."

Some metropolitan areas did buck that nationwide trend. Five of the 220 areas analyzed in the report showed increased foreclosure activity compared to the same period a year ago. Tyler, Texas saw an 88% increase in foreclosure activity. Brownsville, Texas' foreclosure rate went up 21%. Springfield, Illinois saw a 9% increase, and Lake Charles, Louisiana was up 5%. (A report by CoreLogic explained how severe weather last year caused the delinquency rate there to skyrocket.) 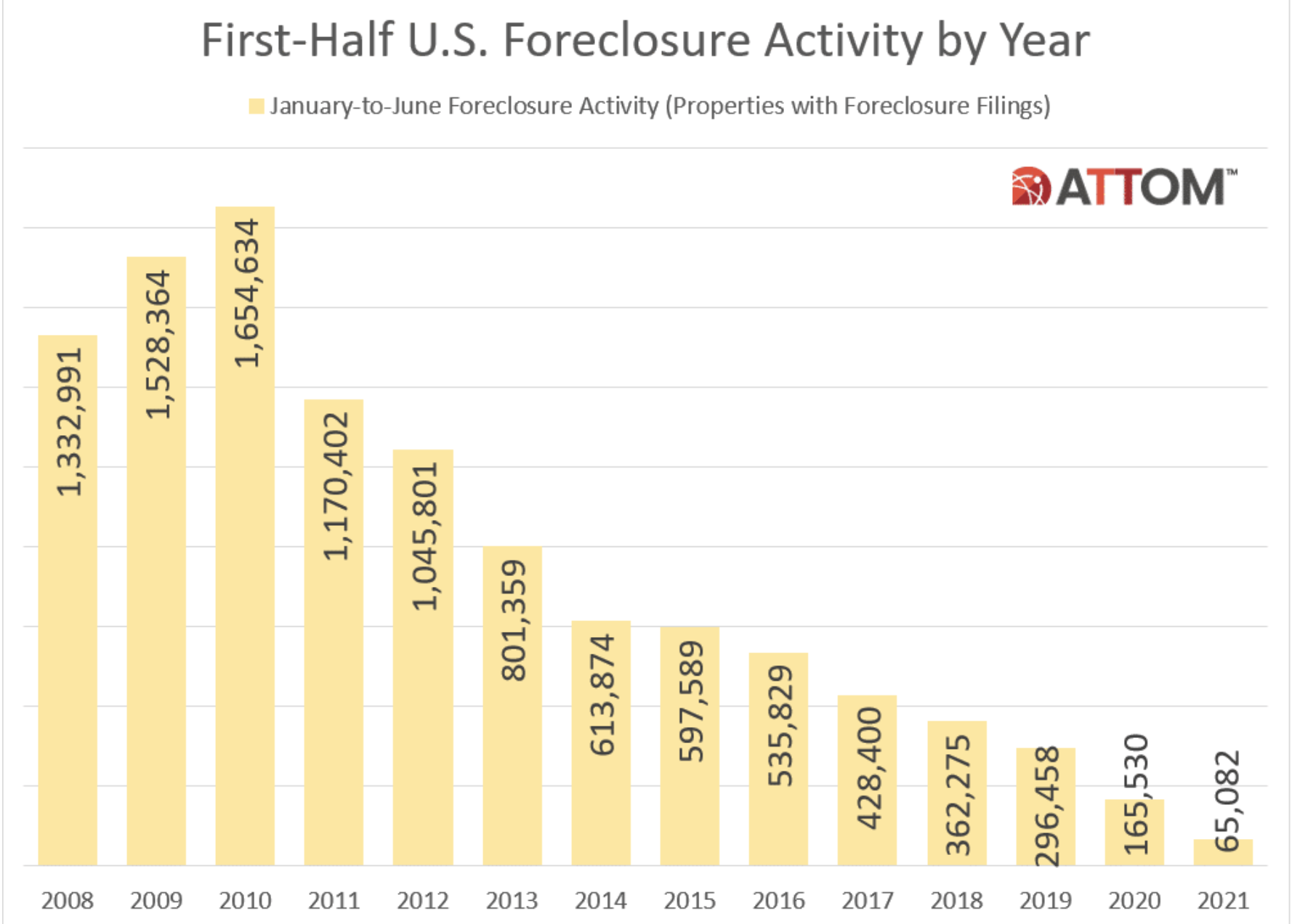 A sum of 36,742 properties countrywide entered the foreclosure process during the first six months of this year, which is a 63% decrease in starts from the same period last year. That number is up, however, by 14%, since the last half of 2020.

Bank repossessions, REOs, have dropped to the lowest levels the researchers at ATTOM have ever seen, according to the report.

Lenders foreclosed on a total 9,730 properties in the first six months of 2021, down 74% from a year ago to the lowest six-month total since ATTOM began tracking in 2005.

The level of equity American homeowners collectively have today likely will prevent a wave of repossessions even when moratoria expire, Sharga says.

“Fewer bank repossessions may be a trend we continue to see even after the government’s programs protecting borrowers from foreclosure expire,” Sharga noted. “Rising home prices have provided most homeowners with enough equity to sell their homes at a profit, rather than lose them to a foreclosure or repossession.”

Researchers at the Urban Institute just revealed suggestions for struggling homeowners and their servicers to leverage equity in a way that prevents distressed properties from falling into disrepair and bringing down neighborhood home value.

ATTOM reports an average of 922 days for a foreclosure to run its course. That is slightly faster than the 930 day average in the previous quarter.