Home / Daily Dose / Cash Is King in the Housing Game

Cash Is King in the Housing Game

A new analysis of home sales by Redfin has found that nearly one-third (30%) of U.S. home purchases this year were paid for with all cash, up from 25.3% during all of 2020, and representing the largest share since 2014, when 30.6% of homes were purchased with all cash.

"I've never seen more cash in Boise's housing market than I've seen in the past year," said Shauna Pendleton, a Redfin Real Estate Agent in Idaho. "I just sold a $700,000 home to a cash buyer last week. The entire $700,000 came from his E*Trade account."

Remote work has allowed homeowners in expensive cities—including San Francisco and New York—to sell their homes and move to less expensive areas, where they can often afford to buy properties in cash.

"Affluent homeowners in Seattle, Portland, and parts of California are selling their homes for $1 million or $2 million," Pendleton said. "Then they're coming to Boise, where they're buying houses that are twice the size for half the price."

Investors, who often pay in cash, are wading back into the housing market after pausing at the onset of the pandemic. U.S. home purchases by investors rose 2.7% year-over-year in Q1, marking the first period of growth since the pandemic began.

The rise in all-cash home purchases is posing challenges for many first-time and lower-income homebuyers, who are having trouble competing with cash offers. While competition is easing slightly, about two-thirds of home offers written by Redfin agents still face bidding wars. A recent analysis by Redfin found that in June 2021, 65% of home offers written by Redfin agents faced competition, down from a revised rate of 72.1% in May, and a pandemic peak of 74.1% in April. Year-over-year, the rate of bidding wars was up over June 2020’s rate of 56.8%.

"The first half of this year was red hot—it was almost impossible to get an offer accepted. But recently, we've started to see buyers get cold feet," said Laura Sechrist Molenda, a Redfin Real Estate Agent in Southern California. "Two of my buyers just had their offers accepted because the sellers' first buyers backed out. The market is still competitive, but buyers are more trepidatious than they were at the start of 2021, and less willing to pull out every stop in order to win." 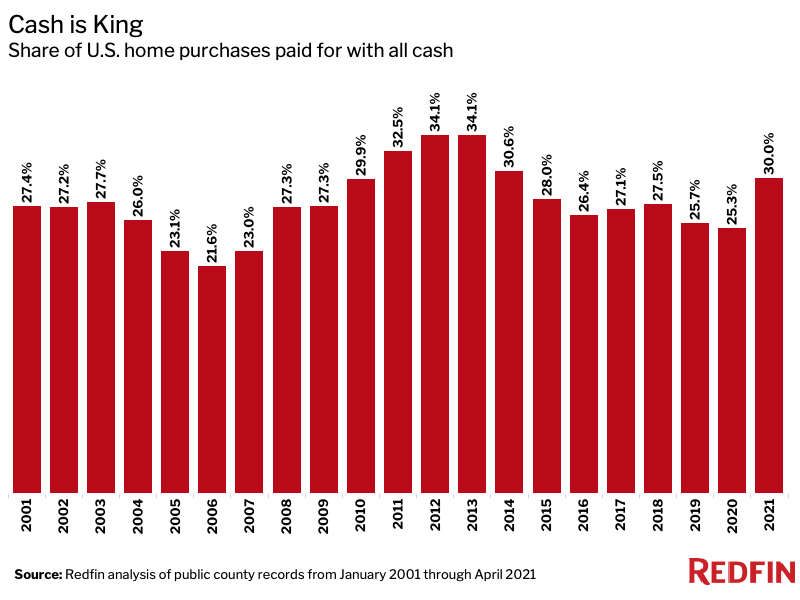 Regionally, Florida was a hot spot for all cash sales, with seven Florida metros in the top 10 markets.

"Florida is a big second-home market, and second-home buyers often pay with cash," said Dina Blau, a Redfin Real Estate Agent in the West Palm Beach, Florida area. "During the pandemic, folks also flocked to Florida to buy primary homes. They sold their houses in New York, New Jersey, Chicago, or California, and used the proceeds to pay cash for properties in Florida."

On the other end of the spectrum, eight of 10 metros in California had the lowest share of all cash transactions, notably because home prices there are relatively high. In both San Jose, California and Oakland, California, 12.5% of reported home purchases this year used all cash—the lowest share of the metros Redfin analyzed. They were followed by Richmond, Virginia (16%); Los Angeles (16%); San Diego (16.2%); Lake County, Illinois (17.2%); Sacramento (17.7%); San Francisco (17.8%); Oxnard, California (18%); and Bakersfield, California (19.3%).

Previous: Rents Rise to New Highs in June
Next: The Week Ahead: HUD to Outline Its Equitable Housing Goals on the Hill