Ask the Economist: First-Time Buyer Misconceptions and the Global Economy 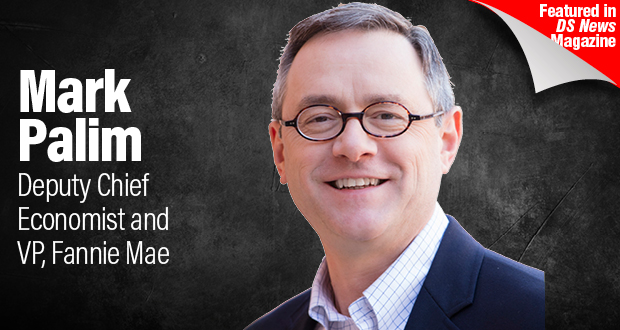 Mark Palim manages the team responsible for Fannie Mae’s macroeconomic and housing forecast and its survey unit. A frequent speaker at industry events and conferences, Palim’s insights have appeared in various media outlets. Before joining Fannie Mae, Palim worked as an economic consultant for PricewaterhouseCoopers and for LECG. He began his career as a fixed-income manager. Palim recently spoke with DS News about the economic factors impacting the U.S. housing and mortgage markets and what we can expect this year.

What are some misconceptions first-time buyers may have about the homebuying process?

It's a failure on our part as an overall industry to better educate people. It is an infrequent transaction, in that it is an opaque transaction and a high-value part of consumer's balance sheet, so you have those competing tensions. However, first-time homebuyers face the same knowledge challenges in getting ready to own and knowing what it takes to qualify.

How have student loans and other debts impacted home purchasing power for millennials and other first-time buyers?

What we've seen in that data over the years is that there's this substantial number of people who attain homeownership and have student debts, so what appears to be going on is that it delays your ability to transition.

Some households start out with student loans but are able to make sufficient income to carry that debt. They then also use debt to buy cars and are more likely to have a lower down payment when it comes time to buy, but they do attain home ownership. The key thing here is, are you actually improving your market skills through the debt and education you take on?

What can we expect throughout the rest of the year, from a macroeconomic perspective?

If you step back on our forecast, last year we were at 3% growth, and we're forecasting 2.3% for this year, and a slowdown in 2020 to 1.8%. The key things to be watching for on the macro side is what's happening with business confidence and investment, and then on the consumer side, consumer confidence and consumer spending.

That’s something we are always watching for, but in this case, you have mixed policies, a dynamic affecting the economy. On the one hand, you have the Fed, which has paused its rate hikes, and we're waiting to see what the lagged effects are for the interest rate increases that have already occurred. The most notable example of that would be car sales, which have been flat and are now going sideways. That's an interest-rate-sensitive component of consumer spending. You've seen some deterioration in credit performance, so we'll be watching closely to see what happens there.

We’re also watching the housing sector closely, where the rise in mortgage rates has had a big impact last year on affordability. You've now had a substantial decline in mortgage rates, and we're hopeful that will help continue to spur a recovery in the housing market during this spring and into the summer, given how weak it was over the winter.

We also have some policy tension going on. On the one hand, you've got the Fed pausing; on the other hand, you have all the concerns around trade negotiations, growth outside the U.S., and what impact trade policy is having on growth around the world. What's going on with various crises in Europe, what's going on with growth in Asia, and are central banks around the world able to respond—by and large, they are not, because they already have negative interest rates. The global policy perspective is, along with the trade issue, a down-side risks for the outlook.

How will the global economy impact the U.S. housing market?

Contrast with where we were in the beginning of 2018, where we had pretty coordinated increases in growth across the globe, to where we are now, where we've seen over the winter months, and the second half of last year and into the winter, where we saw substantial slowdown in economic activity around the world. You even had a negative quarter in Germany, you saw softness in Italy, and you had Brexit, which continues to hang over the European outlook.

Last year we were talking about, "Wow, when would other central banks follow the Fed and start tightening policy, or at least stop expanding their balance sheets." By this spring, it had become a different world, and the European Central Bank has moved away from any loosening or any tightening. You still have negative rates across many bond markets, and in the short term, a number of central banks with negative interest rates. They are finding that that's not stimulating growth in Japan or in Europe the way they'd hoped for. The U.S. economy has been, by far, the bright star in the global economy.

How does that play back into the U.S. housing market? Part of the reason we've had the decline in mortgage rates since October is the global slowdown meant that the yield on 10-year government bond rates around the world have come down. The U.S. remains the highest yielding of all the major bond markets. So, as rates decline around the world, the U.S. bond market becomes very attractive and rates follow the rest of the world down.

Previous: The Industry Pulse: Updates on Optimal Blue, LenderClose, and More
Next: The Week Ahead: Will the Fed Reduce Rates?