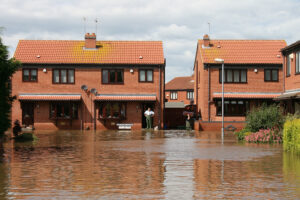 FEMA data, assembled by Value Penguin [1], found that properties in Louisiana are most at-risk for flooding, but a broader model suggests a surprising state—West Virginia—would be the hardest hit.

The data reported that West Virginia has the highest percentage of homes that would be impacted in a 100-year storm (29.3%), as Louisiana reported the highest share of homes in FEMA’s Special Flood Hazard Areas (23.5%).

FEMA and the First Street Foundation [2] models identify areas of risk of flooding as those with at least a 1% chance of being seriously impacted by a flood event in any given year—referred to as a base flood or 100-year flood.

Data from the two reports vary, as FEMA found 3.2% of Hawaii properties are in a flood hazard area, which is drastically less than 26.1% found in the First Street Foundation model.

The report added that Louisiana expects to experience the biggest jump in the share of homes facing a flood risk due to rising climate change concerns.

In Louisiana, 24.5% of properties are at-risk for flooding, according to First Street Foundation. This is expected to increase to 38% in 30 years. Florida, which has the second-highest increase in flood risk, may increase to 26.6% from 23.3%.

Flood concerns have been top-of-mind [3] in Washington, as the U.S. Senate Committee on Banking, Housing, and Urban Affairs recently held the session, “Reauthorization of the National Flood Insurance Program: Administration Perspectives [3].”

“The NFIP combats the overall threat of flooding through four related components: Flood insurance; floodplain management; floodplain mapping; and mitigation,” said Sen. Sharrod Brown in calling for more to be done for those in high-risk areas. “The Bipartisan Infrastructure Bill [4] offers a down payment on new opportunities for communities to help homeowners stay out of harm’s way. But we need to do more. Infrastructure investment was a good start. But because of climate deniers in the Senate and our collective failure to fight climate change, that investment in the infrastructure bill will not be enough.”

FEMA personnel are already preparing for the 2022 Hurricane Season, expected by The National Oceanic and Atmospheric Administration to be above-normal for activity, as CoreLogic’s recently released 2022 Hurricane Report [5]—which analyzes hurricane and storm surge and wind risk exposure for  and multifamily residences (MFRs) along the U.S. Gulf and Atlantic Coasts—found that nearly 7.8 million homes with more than $2.3 trillion in combined reconstruction cost value (RCV) are at risk of hurricane-related damages this upcoming season.

On September 30, 2022, the NFIP’s statutory authority to sell and renew flood insurance policies is set to expire. Since the NFIP’s last multi-year reauthorization expired on September 30, 2017, the NFIP has experienced several short-term extensions and three brief lapses. The short-term extensions have been found to be disruptive and cause existing and potential policyholders to lose confidence in the NFIP.