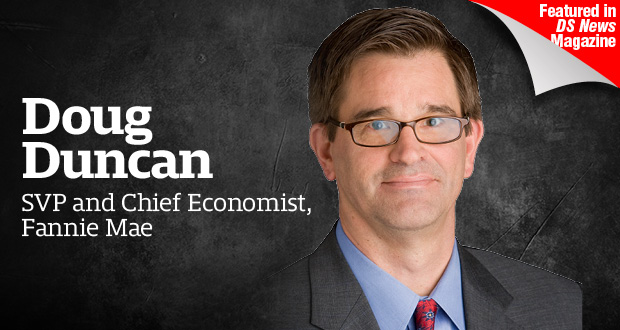 This interview originally appeared in the August edition of DS News.

Doug Duncan, SVP and Chief Economist, Fannie Mae, is responsible for forecasting and analysis of the economy and the housing and mortgage markets.

He also oversees strategic research regarding the potential impact of external factors on the housing and mortgage markets. Duncan leads the House Price Forecast Working Group reporting to the Finance Committee.

Duncan recently spoke to DS News on how the economic shutdown has impacted the industry, the response by the Federal Reserve, and how housing could rebound.

How could another potential economic shutdown hinder housing’s growth for the remainder of the year?

What that does is extend the time to recovery for some small businesses, particularly restaurants and theaters. It, once again, calls into question their viability. The longer they go without reopening, the more they eat up of their existing capital and there is a greater potential that they can fail.

If they fail, that means jobs are going to be lost, and those lost jobs result in lower income, which results in less consumption. If there was a significant broad-based downturn, you would get the W-shaped growth path that you will have heard people talking about. If we see a broad-based downturn we would have to lower our forecast for growth this year and next year.

When it comes to the virus, some people are using the word resurgence. From our perspective, what’s actually happening is that the geography being most heavily impacted has changed. It’s gone from the Northeast and the Northwest down to the South. It’s moved regionally, but those areas which were first hit hardest have not seen a rebound yet. If we saw a resurgence in areas that were impacted first, then that would be considered a resurgence. We haven’t really seen the resurgence yet. It has been more of a geographic shift.

Could the U.S. economy withstand another large-scale economic shutdown?

It can, but not without significant pain. Economic activity won’t go away entirely. People still need to live, eat, have shelter, clothing. The basic needs will still have to be met somehow. Certainly, there would be some additional policy decisions made on how best to support the economy. But another large-scale shutdown would result in a deeper downturn than we have seen and bring about more serious employment and capital destruction. If this were to happen, it would take longer for a sustainable economic recovery to take place, and the potential growth path of the economy going forward would certainly be affected.

As you see firms going bankrupt or closing permanently, that’s all capital that is taken out of the system as investment and would have to be replaced over time. A shutdown would take us further down and it would take longer to get back on a path to recovery.

What are your thoughts on the actions that the Federal Reserve has taken up at this point to stabilize the mortgage market?

Why was this spread so wide? The huge ramp-up in demand for refinancing was a capacity problem for the mortgage industry. They simply didn’t have the capacity to process the volume of loan applications that rapidly because some of the normal processes in mortgage underwriting were disrupted by the virus. I inspectors were unwilling to go to properties for fear of virus and closing table meetings were not taking place because of virus concerns.

Now that mortgage servicing rights are trading again, that source of liquidity has returned and the need to keep spreads wider is gone. We therefore expect spreads will narrow and mortgage rates will fall going from current levels going into next year.

The Fed has committed to monthly purchases of $80 billion of U.S. Treasuries and $40 billion worth of mortgage-backed securities. Those two activities continue to expand the balance sheet, but the central bank swap mechanism, which they had put in place to maintain liquidity globally has started to shrink. Also, none of the other programs that they have out there are fully subscribed at this point.

I don’t know that you’re going to see much additional done from a Fed perspective, in terms of additions of new programs or changes in existing programs. They are going to wait to see how the effectiveness of existing programs works. They’ll maintain interest rates, the Fed’s funds target, in a range of zero to 0.25 for the foreseeable future.

If you look at our forecast for this year, the average 10-year treasury rate will probably be about 0.9%. The 10-year Treasury will average about 0.8% in 2021. If that is the case and mortgage to treasury spreads shrink, you’re probably going to see 30-year fixed mortgages somewhere in the 2.75 percent range at some point over the course of the next year.