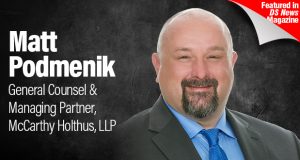 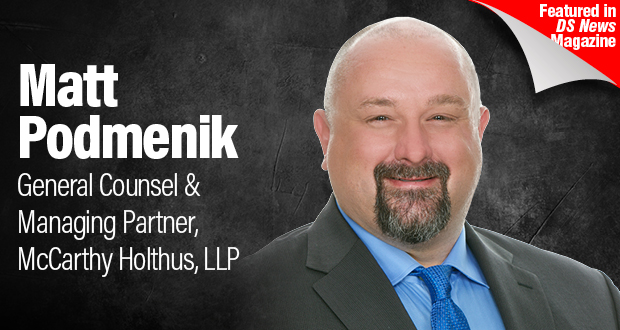 Editor's note: This piece originally appeared in the August issue [1] of DS News.

Matthew Podmenik has received an AV Preeminent rating from Martindale Hubbell, ranking at the highest level of professional excellence for legal knowledge, communication skills, and ethical standards. Podmenik has authored articles involving lenders’ rights for the California Real Property Law Reporter, Legal League 100 Quarterly, California Mortgage Finance News, and the United Trustee Association. Podmenik is admitted to practice in the state of California; the U.S. District Court in the Eastern, Central, Northern, and Southern Districts of California; the Ninth Circuit Court of Appeal; and the U.S. Supreme Court. He spoke to DS News about the trends and challenges currently facing financial services firms and servicers.

WHAT ARE SOME OF THE PRIMARY CHALLENGES FACING SERVICERS AND LAW FIRMS IN 2019?

One of the biggest issues for all of us is the continuing change in the legislative environment, nuanced state law requirements, and the need for servicers to have firms that are leveraged to be able to track these legislative updates and provide timely and substantive of updates. Lower inventory is an issue for everybody as well.

YOUR FIRM WON A MAJOR LEGAL VICTORY EARLIER THIS YEAR WITH OBDUSKEY V. MCCARTHY HOLTHUS. WHAT ARE SOME OTHER CASES THE INDUSTRY SHOULD BE KEEPING AN EYE ON?

It's an exciting time for the industry. We will see an increased number of cases out there that will, hopefully, be helpful to us following the McCarthy & Holthus decision. The next logical step will be a case where they try to apply the ruling to a judicial foreclosure—in particular, a judicial foreclosure that is not seeking a deficiency. Reading the tea leaves, I would expect a favorable result on that, which I think would be a huge win for the entire industry. There are also other Fair Debt Collection Practices Act (FDCPA) cases out there. There's the Klemm case that's with the Supreme Court, which deals with the statute of limitations. The primary question for the court is whether the SOL begins to run when the plaintiff discovers the alleged error or does the SOL start to run from the date of the occurrence. If it is the later, it could significantly reduce the cost to litigate FDCPA cases. It’s a significant case that would affect everyone from Maine to California. It will also be interesting to watch the evolution of the McCarthy & Holthus case. What will the next challenges be? What will be covered by the case? Where might a state legislature try to amend the state’s debt collection law to provide different relief to borrowers or consumers?

WHAT ARE YOUR THOUGHTS ON STATES POTENTIALLY SETTING UP THEIR OWN VERSIONS OF THE CONSUMER FINANCIAL PROTECTION BUREAU?

In my opinion, I believe our industry is as highly regulated as any and there isn’t a need for additional regulations. I understand the desire for local governments to take affirmative action to assist their constituents. However, it is often lost how difficult it is to manage any process on a national level when there are national, state, county, and city-specific regulations. With that said, I think this is inevitable and might have already happened in Pennsylvania. This is just another example of state-specific changes that are likely to come in the next year.

WHAT ARE LESSONS YOU’VE LEARNED FROM PAST NATURAL DISASTERS? WHAT SHOULD SERVICERS DO TO PREPARE TO HELP BORROWERS THIS YEAR?

One suggestion would be the implementation of Borrower Advocacy Programs to assist homeowners with their hazard insurance claims. These programs are aimed at default prevention and can have the added benefit of an enhanced reputation during a time of need. Borrowers may be unfamiliar with the nuances of their policy, may unknowingly accept a wrongful denial of coverage, and may be unaware of changes to FEMA flood maps that could trigger a requirement for flood coverage. In short, communication is key, and having a program to help borrowers is always a good place to start.

WHAT ARE SOME TRENDS YOU FORESEE AS WE HEAD TOWARD 2020?

I see a decrease in default volume, which could increase firm and service transfers as a result of servicer and firm consolidation. Those results are unfortunately foreseeable and will continue until there is a significant economic change. As a result, we all need to focus on providing exceptional customer service and improve efficiencies.

HOW IS TECHNOLOGY IMPACTING THE INDUSTRY?

The question here is really two-fold. 1) How is technology being used among firms with servicers and their vendors, and 2) how is technology being used with borrowers? As to the latter, consumers want modern technology. They want to communicate with the servicers on apps. Even email is probably outdated at this point. They want quick interactions, and, generally speaking, anytime we use technology to become faster, it can be a good thing. However, there are certain protocols and regulations you need to keep in mind, such as verifying the identity of the person. That becomes an issue if you're just app based. There are certain things that may require a phone call, but technology will certainly help build a better relationship between borrowers and servicers. As technology relates to firms and servicers, it's obviously not going away. It provides us real-time information and data, which is great. The difficulty, of course, is the expectation that everything's perfect. I haven't found the system yet that links up with another system perfectly. When the data doesn't coincide, often it results in even more manual work, which is what technology was hopefully supposed to help replace. Expectations that systems are going to be perfectly aligned just aren’t realistic, but it is allowing us instant access to data to make informed decisions.