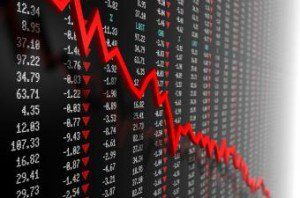 Editor's note: This is a breaking story. Please check back for updates.

Recession fears filled Wall Street on Wednesday as the Dow Jones crashed, falling more than 800 points and the 10-year treasury yield briefly broke the two-year rate for the first time since 2005—an economic marker that has often proved a forerunner of recessions in times past.

CNBC reports that there have been five inversions of the 2-year and 10-year yields since 1978. A recession followed each inversion. However, data shows that those recessions began on average 22 months after the initial inversion.

"Historically, an inverted yield curve is a significant sign that points to the development of an economic slowdown in the near to medium term," said Five Star Global President & CEO Ed Delgado. "This latest development is another in a series of economic markers that support the possibility of a future recessionary cycle.”

President Donald Trump, who sent a series of tweets Wednesday, said the following on the economy: “Spread is way too much as other countries say THANK YOU to clueless Jay Powell and the Federal Reserve. Germany, and many others, are playing the game! CRAZY INVERTED YIELD CURVE! We should easily be reaping big Rewards & Gains, but the Fed is holding us back. We will Win!”

China—the world’s second-largest economy—reported its weakest growth in 17 years, as its industrial output slowed to 4.8% in July. Germany’s GDP shrank by 0.1% between April and June, and the Euro zone GDP grew by just 0.2% from the prior quarter.

Trump, however, announced plans to delay tariffs on Chinese goods, reversing plans to enact a 10% tariff on $300 million worth of Chinese goods. Tariffs were expected to begin September 1.

Gerry Frigon, president and chief investment officer at Taylor Frigon Capital Management, said that research suggests that investors make the most mistakes after down turns, which is “akin to jumping off a ship in the middle of a hurricane.”

“If, however, investors base their strategies not on timing cycles but on the real source of most of the great wealth created for families in this country for the past hundred years, the ownership of shares in successful businesses for a period of years or even decades, then they should both expect interim volatility and be prepared to weather it,” Frigon said.

He added that there will always be ebbs and flows within the economy, and they shouldn’t influence business decisions.

Previous: Homeowners Bracing for Climate Change
Next: Capitalizing on the Single-Family Investment Market