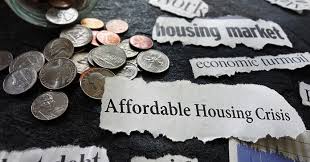 According to the National Association of Home Builders (NAHB)/Wells Fargo Housing Opportunity Index (HOI), just 42.8% of new and existing homes sold between the beginning of April and end of June were affordable to families earning the U.S. median income of $90,000. This is a sharp drop from the 56.9% of homes sold in Q1 that were affordable to median-income earners.

“Rising housing costs stemming from increased interest rates, supply chain disruptions that have led to higher prices for building materials, and a persistent lack of construction workers are dramatically affecting home prices,” said NAHB Chairman Jerry Konter, a home builder and developer from Savannah, Georgia. “Taming housing costs will ultimately require building more homes, and it will be easier to increase production in more affordable smaller and mid-sized markets that are growing in population and attracting new businesses.

The HOI shows that the national median home price jumped to an all-time high of $390,000 in Q2, surpassing the previous record-high of $365,000 set in the first quarter. Meanwhile, average mortgage rates soared by 1.47 basis points in the second quarter to 5.33% from an average rate of 3.86% in Q1. This is the largest quarterly mortgage rate jump in the history of the HOI series, which dates back to 2012.

The Most and Least Affordable Markets in the Q1

Lansing-East Lansing, Michigan, was the nation’s most affordable major housing market, defined as a metro with a population of at least 500,000. There, 85.2% of all new and existing homes sold in Q2 were affordable to families earning the area’s median income of $89,500.

Meanwhile, Elmira, New York, was rated the nation’s most affordable small market, with 91.8% of homes sold in Q2 being affordable to families earning the median income of $77,900.

For the seventh straight quarter, Los Angeles-Long Beach-Glendale, California, remained the nation’s least affordable major housing market. There, just 3.6% of the homes sold during Q2 were affordable to families earning the area’s median income of $90,100.

The top five least affordable small housing markets were also in the Golden State. At the very bottom of the affordability chart was Salinas, California, where 5.3% of all new and existing homes sold in Q2 were affordable to families earning the area’s median income of $90,100.