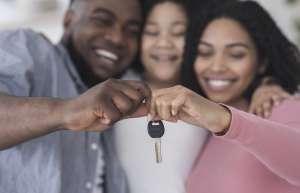 Government-sponsored enterprise Fannie Mae last week announced changes to its automated underwriting system that company leaders say will make homeownership more achievable for those with thin credit files—a barrier to wealth building that more heavily affects Black households and other people of color, according to a blog post penned by the enterprise's CEO Hugh Frater.

Considering the fact that, for many households, rent is the single largest expense, and cuts deeper into monthly income than does homeowners' mortgage payments, according to the latest data, FHFA Acting Director Sandra L. Thompson said "there is no reason timely payment of monthly housing expenses shouldn’t be included in underwriting calculations."

Qualifying borrowers must be a first-time homebuyers, pay at least $300 per month in rent, and must consent to sharing 12 months of their bank statement history. Only positive payment history will be factored in, and the loan must be for a primary residence.

Frater points out how the housing-finance and economic systems have disproportionately favored white Americans.

"While credit history is a key element in evaluating a borrower’s ability to make a mortgage payment, building credit in the United States is not an equitable endeavor. Most ways to establish credit involve student loans, credit cards, or parental co-signers. But, people of color are statistically less likely to use these forms of credit to manage their financial lives," Frater said. "As a result, people of color are disproportionately represented among the 20% of the U.S. population having little to no established credit history. Our National Housing Survey found that Black consumers identify insufficient credit score or credit history as their single biggest obstacle to getting a mortgage—and do so at a much higher rate than white consumers (29% to 18%)."

In a recent MReport Q+A, the Director of Governmental Affairs at CBC Mortgage Agency also spoke of the discrepancy between white Americans and people of color when it comes to credit and mortgage lending. "The Black and brown community have what is known as 'thin file' in the mortgage industry, which basically means that you have little to no credit in your in your credit score and your credit recording. The median white credit score is 751, and the median Black credit score is 626. Again, a very large disparity."

Studies have shown the inclusion of rent payment history can significantly affect a person's credit score and thus the ability to purchase a home.

When Fannie Mae tested the system on past applicants that were not approved, 17% would have qualified using the new policy.

A recent Experian study found that some 75% of the participants who had their rental payments included as part of their report saw their credit scores improve between 11 and 29 points.

The state of credit scores is one reason why the rate of Black homeownership is roughly 30 percentage points lower than for white households, which translates to almost 4.7 million fewer homeowners, according to Frater. And the inability to purchase a home contributes to the larger racial wealth divide.

"This gap has stood firm since the early 1900s, and it stems in part from historically racist government policies that disadvantaged Black Americans and stymied their ability to build wealth and economic stability. It has been estimated that if homeownership rates were the same for all races, the wealth gap between Black and white families would be reduced by 31%."

Says Frater of the enterprise's update, " This change demonstrates the potential of using technology and data to remove systemic barriers to mortgage finance ... and "is one important step in correcting housing inequities and encouraging the housing system to develop new ways to serve all of society safely and fairly."