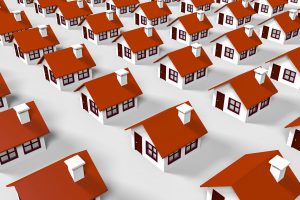 The median home price once again hit an all-time high in July, reports the research team at Redfin, reaching $385,600. That marks a 20% annual increase, which does not quite top the largest annual growth-rate peak of 26% in May but is still higher than any point on record prior to April of this year.

July makes 12 consecutive months of double-digit price gains, which is significant because a year ago the housing market was already in a strong growth phase, after pausing briefly at the onset of the pandemic. One year later, team Redfin says it is still seeing extremely strong growth, but the market is gradually becoming less competitive for buyers.

"Home prices are still soaring at an astonishing rate," said Redfin Chief Economist Daryl Fairweather. "Now that we're a year out from the post-lockdown rebound, we can no longer explain away the enormous price growth by pointing to the pandemic's earliest impacts on the housing market. While this ongoing trend continues to fuel an already severe affordability crisis, the market is becoming somewhat less competitive for homebuyers. Demand has softened enough that homes aren't flying off the market quite as fast or for as much above list price as they were in the spring. Mortgage rates are remaining about as low as they've ever been, so buyers who lose out in a bidding war don't have to fear that they've missed their window to buy. As more homes are being listed, it may be worth waiting for the right home at the right price."

Median sale prices increased from a year earlier in all of the 85 largest metro areas in the report. The largest price increase was in Austin, Texas, where prices shot up 39%.

The smallest price increases were posted in New Orleans, where prices still rose by 5%.

Seasonally adjusted home sales in July were down 1% from a year earlier, and down 0.2% from June. Compared to July 2020, home sales fell in 55 of the 85 metros. The biggest sales declines were seen in Richmond, Virginia, down by 52%. The largest gains were in places where sales were still somewhat depressed in July 2020, so New York City, up 79% and Nassau County, New York, up 53%.

The seasonally adjusted count of all homes that were for sale at any time during the month fell 25% year over year to their lowest level on record. Listings rose in only two of the 85 metros—Milwaukee and Columbus.

The typical home that sold in July went under contract in 15 days—less than half as much time as a year earlier, when homes sold in a median 35 days—but up one day from June.

While it creates affordability challenges for first time homebuyers, for existing homeowners, the "astonishing" rate of home price growth is a primary condition differentiating the pandemic-related strains on the American economy from that of the Great Recession, experts have said.

Thirteen years ago, more borrowers than not were underwater on their mortgages. Today, home prices have led to unprecedented amounts of equity, thus borrowers who are currently delinquent on their mortgage payments can tap into their equity and sell their home rather than lose it through foreclosure, CoreLogic's Frank Martell said when his company issued its equity report last month.

“Homeowner equity has more than doubled over the past decade and has become a crucial buffer for many weathering the challenges of the pandemic,” he said at the time. "This reduces the likelihood of large numbers of distressed sales from homeowners who emerge from forbearance later in the year."