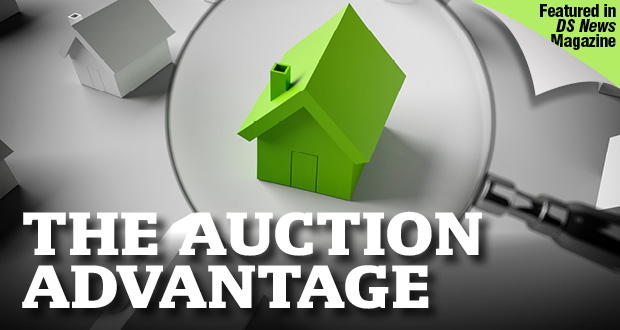 This story originally appeared in the August edition of DS News.

Distressed home sales are square pegs that don’t fit well into the round hole of the retail housing market, a reality that has been highlighted by the recent economic upheaval induced by the coronavirus pandemic.

The economic upheaval has somewhat surprisingly triggered a frenzy of demand in many local housing markets as buyers clamor for a limited supply of lower-density housing far away from the madding crowd. Purchase mortgage applications rose annually for the sixth consecutive week in the week ending June 26, according to the Mortgage Bankers Association, and pending home sales in May spiked 44 percent from April, the biggest monthly increase on record, according to the National Association of Realtors.

Meanwhile the average sale price for bank-owned (REO) homes sold via online auction on the Auction.com platform increased 12.7 percent in May. 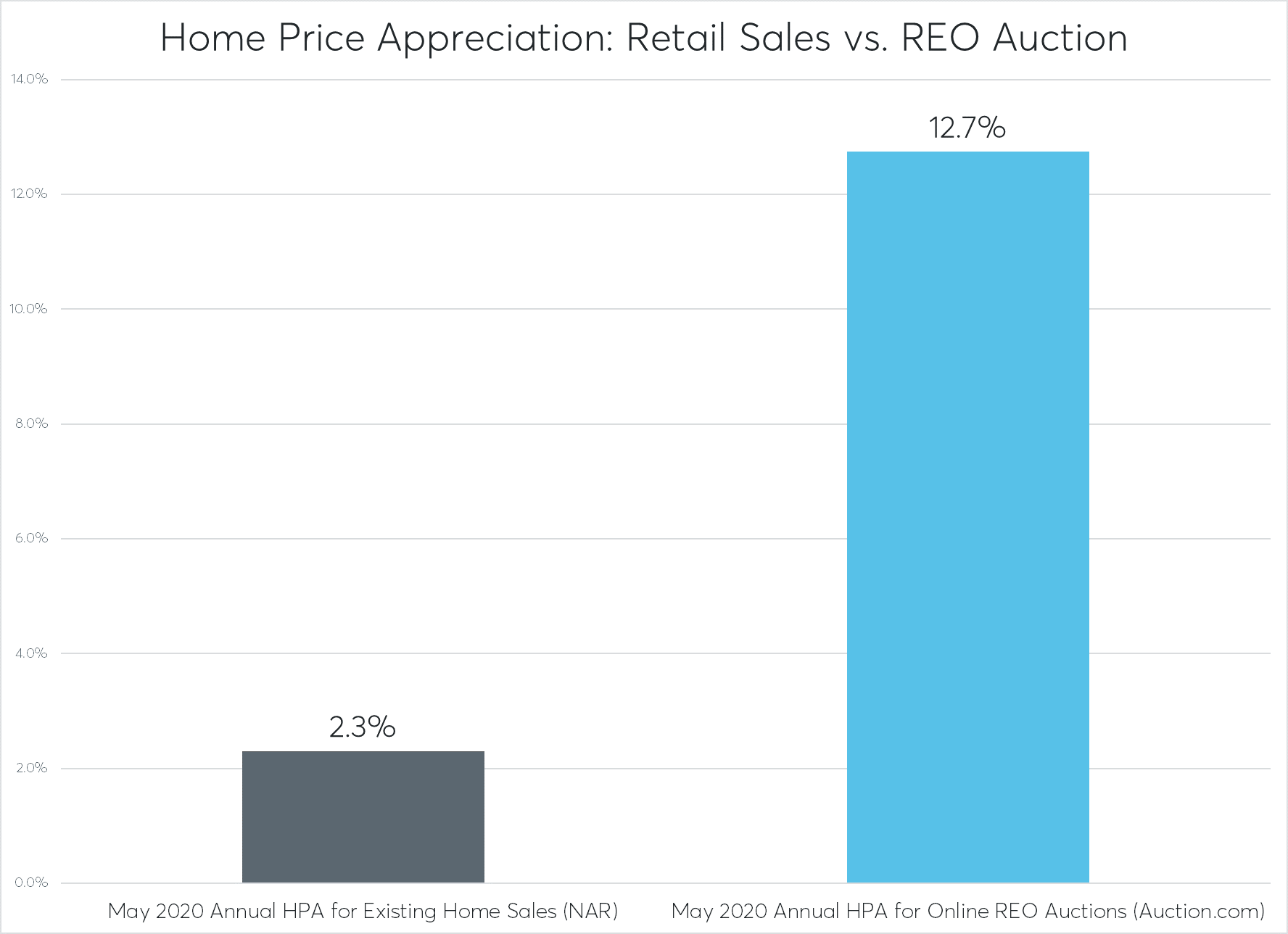 Auctions are also outperforming the retail market when it comes to buyer competition. According to Redfin, the share of MLS listings with multiple offers increased to 49 percent in May, and was above 50 percent in some markets, including Boston, Dallas, Washington, D.C., Salt Lake City, and Denver.

But even in this frenzied market, the share of retail homes with multiple offers is dwarfed by the share of multiple bidders for distressed homes sold via online auction. Proprietary data from Auction.com shows 85 percent of all bank-owned (REO) homes sold in May received bids from multiple, unique bidders — well above the retail share of 49 percent. 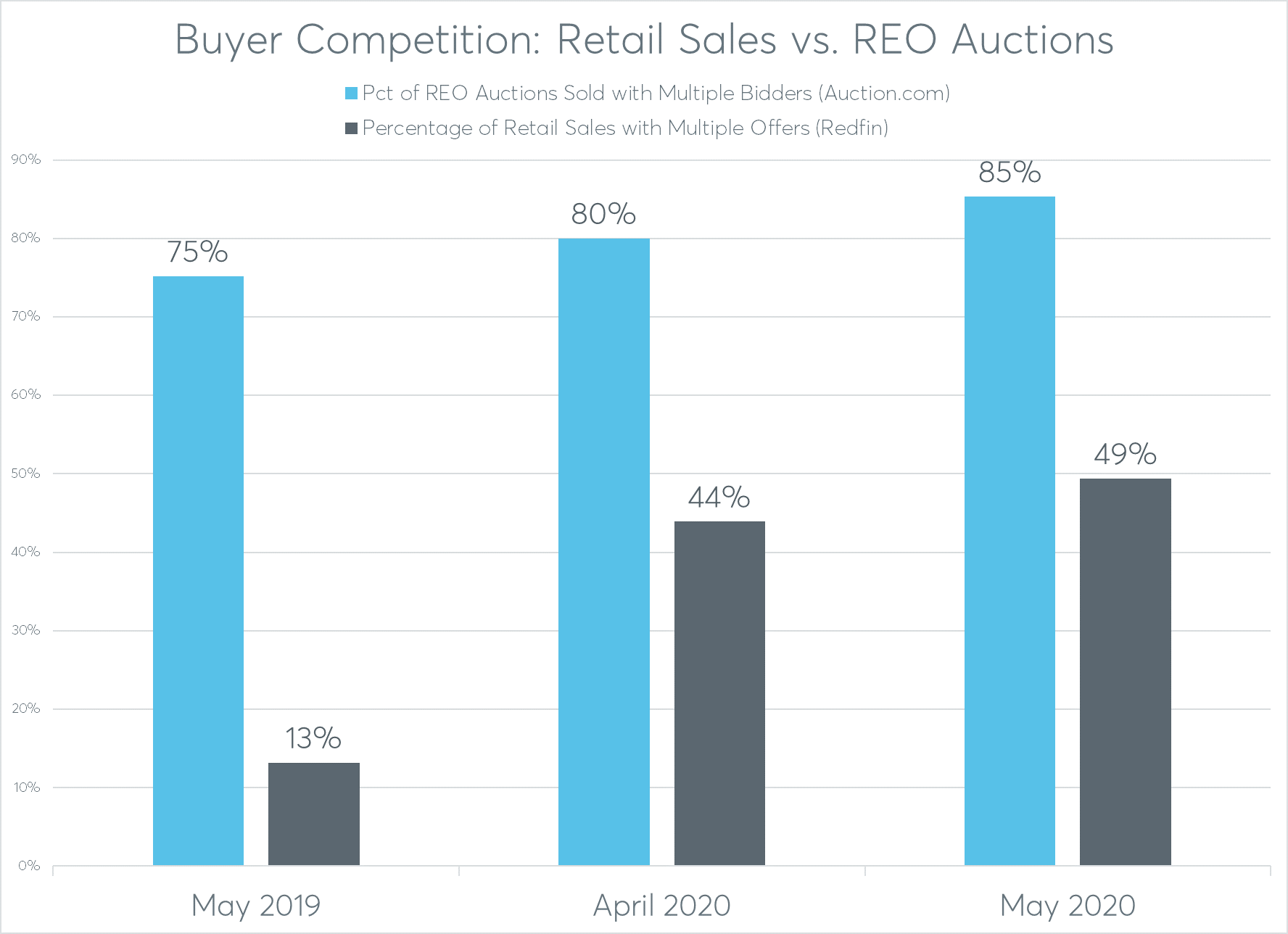 Additionally, each day a distressed property sits on the market represents additional risk to the seller and the surrounding neighborhood. Many distressed properties are vacant or abandoned, making them magnets for vandalism and general neglect, both of which contribute to neighborhood blight.

More capricious demand in the retail market results in longer days on market for distressed properties, according to an Auction.com analysis of more than 15,000 distressed property dispositions in Q4 2019 using proprietary foreclosure auction data, public record data and MLS data.

Meanwhile homes that reverted to REO at the foreclosure auction but then were sold via online auction were sold for an average of 90.7 percent of the seller’s credit bid at the foreclosure auction. Although slightly below the price execution for REOs sold on the MLS, those online auction sales closed 144 days faster on average than the MLS sales, saving servicers 144 days’ worth of holding costs. 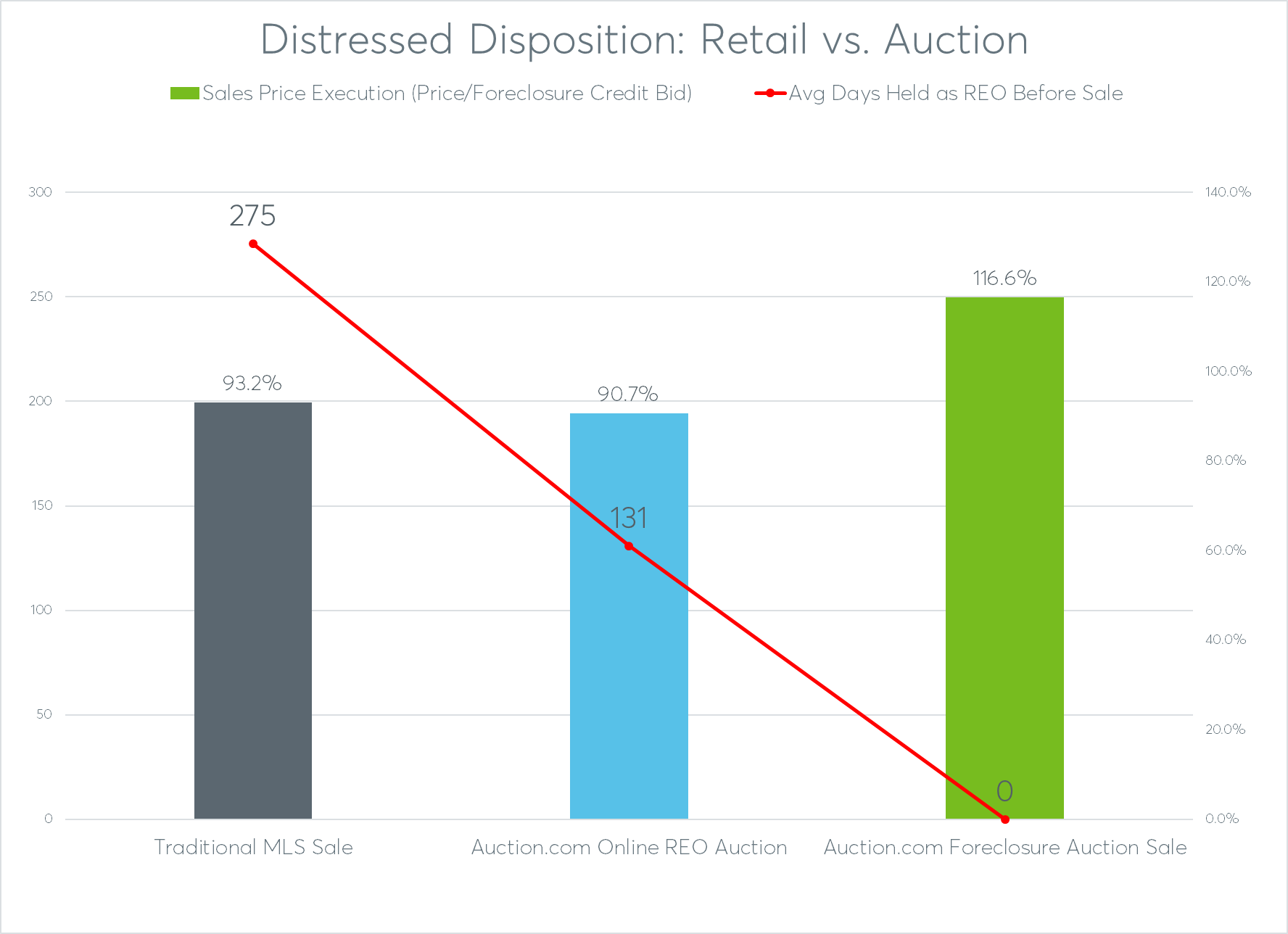 Auctions outperform the MLS when it comes to distressed sales for a deceptively simple reason: the inherently distressed condition of these homes tends to attract cash buyers and deter retail buyers who are using financing. This reality forces distressed property sellers into a disposition decision tree that typically ends with auction as the optimal sales method.

The inherently distressed condition of most distressed properties means that many don’t qualify for traditional financing options available to retail buyers. This gives the seller a choice to either sell as-is to a cash buyer or to renovate the property into financeable condition so it can be sold to a retail buyer.

If the property is sold as-is on the MLS, it likely won’t attract optimal competition from cash buyers because most cash buyers are looking elsewhere (i.e. at auction) to find deals. A survey of Auction.com buyers in April found that only 12 percent of buyers selected the MLS as their preferred property acquisition method compared to 61 percent who selected online REO auctions as their preferred property acquisition method.

Furthermore, the few cash buyers who are mining the MLS for deals are accustomed to getting a discount when they acquire properties through that channel. This is evident from an analysis of public record sales data from ATTOM Data Solutions, which shows all-cash homebuyers in 2019 purchased for 10 percent below estimated market value on average while homebuyers using financing purchased for 3 percent above market value on average. The analysis excluded cash buyers purchasing at foreclosure sale.

On the other hand, if a distressed property is renovated into financeable condition before it is resold, the seller (rather than a cash-buying real estate investor) takes on the risk of holding and renovating the property — betting that the renovations will ultimately help the property sell at a higher price point. It’s clear from the aforementioned price-to-credit bid ratios that this additional risk and renovation cost do little to improve price execution and can even harm price execution.

Many mortgage servicers are admirably committed to promoting neighborhood stabilization through their distressed disposition strategy. Renovating and reselling to retail buyers — who are more likely to be owner-occupants than the cash-buying real estate investors — may seem like the best disposition strategy for promoting neighborhood stabilization.

But it turns out that is often not the case.

This analysis implies that cash-buying real estate investors are better than mortgage servicers at efficiently getting formerly distressed homes into the hands of owner-occupants. 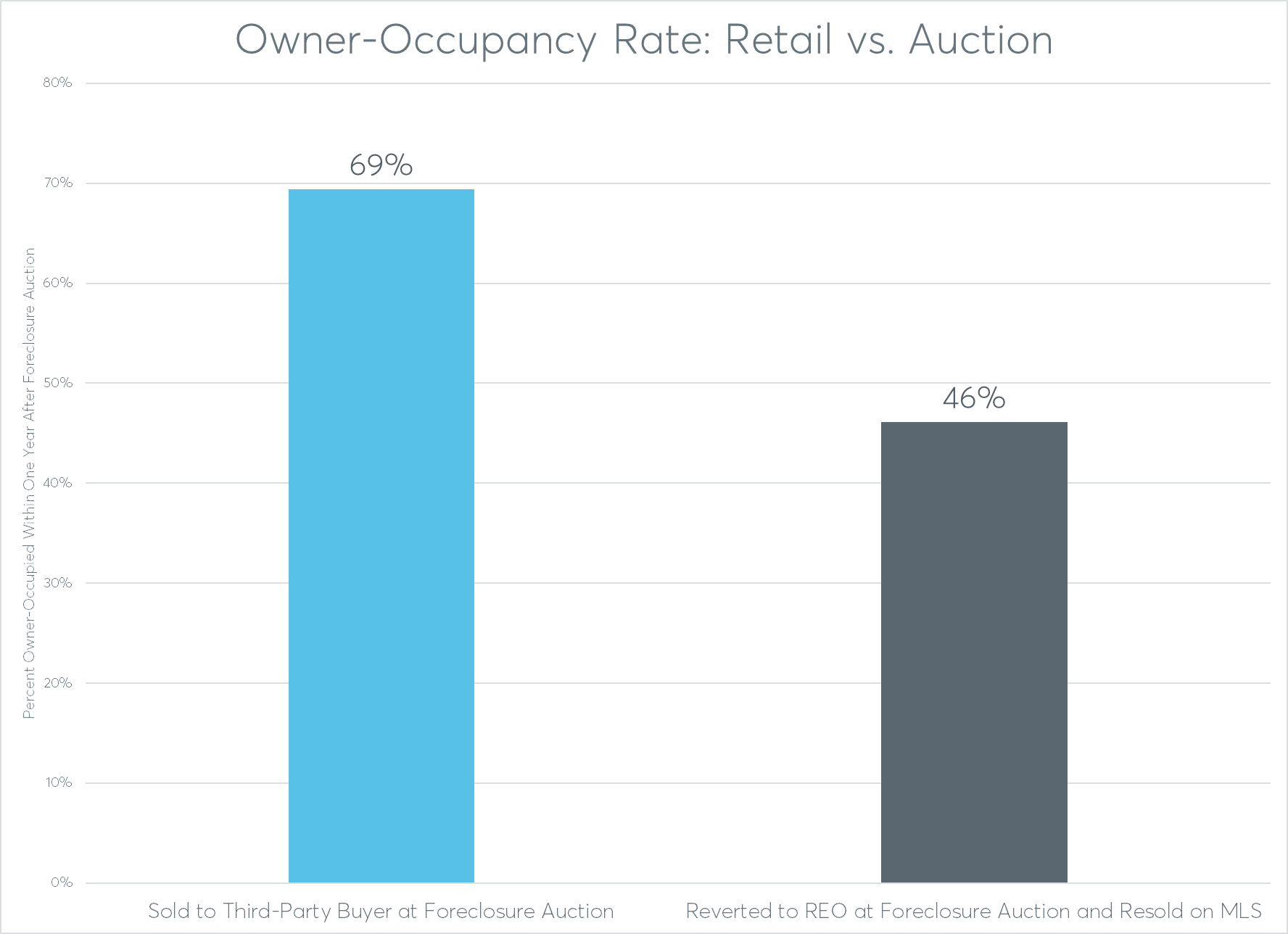 Given that the majority of foreclosure auction buyers are small, often local, real estate investors — a February 2020 Auction.com buyer survey found that 76 percent of buyers purchased five or fewer properties in 2019 — selling at the foreclosure auction has the added neighborhood stabilization benefit of providing a wealth-building opportunity for local entrepreneurs who will likely invest back into the community.

“I’m looking for a way to make homes more affordable because I’ve seen these homes become more out of reach for many,” said Michael Johnston, owner of New Orleans-based Rehab2Home Properties, which buys and rehabs distressed homes, many located in low-income Opportunity Zones. Johnston grew up in the area and wants to give back to the community while building wealth. “I used to ride my bicycle through the neighborhood. … I am all for helping my community, but I can’t do it for free.”

Johnston is primarily employing the hold-as-rental investing strategy for homes located in Opportunity Zones, given that the program requires investors to hold properties for at least 10 years to receive the full tax benefit.

“If you’re willing to buy a property and hold it for 10 years or more, then the capital gains tax you would pay on a sale would actually disappear,” Johnston said, adding that he believes the neighborhoods he’s investing in could see more rapid appreciation over the next decade as a result of being designated as Opportunity Zones. “If I build (and rehab) enough homes in these areas, and other people join in, what could happen in 10 years? We’ll see.”

Previous: COVID Relief’s ‘Unanticipated Side Effect’ in the MBS Market
Next: The Ticking Clock of Mortgage Delinquency