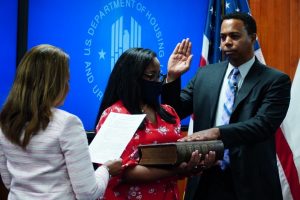 Damon Smith has been sworn in as General Counsel of Housing and Urban Development.

The Senate on August 11 confirmed Smith by unanimous consent. U.S. Department of Housing and Urban Development (HUD) Deputy Secretary Adrianne Todman issued the oath of office to Smith during a ceremony at HUD’s headquarters.

Smith most recently served as a Senior Advisor to HUD Secretary Marcia Fudge. Before joining HUD in 2021 as Principal Deputy General Counsel, Smith served as Senior Director of Advocacy and Counsel at the Credit Union National Association (CUNA). He also held several roles at HUD during the Obama-Biden Administration, including Senior Counsel and Acting General Counsel.

“We congratulate our former colleague on his Senate confirmation,” said CUNA President/CEO Jim Nussle. “Damon was a trusted voice for credit unions during his time at CUNA, and I have no doubt that HUD will be benefit from his expertise.”

According to a nomination announcement from the Biden Administration in June, Damon provided legal and policy guidance on a range of programs and activities and set the department’s litigation strategy and regulatory agenda during the Obama Administration. Before his government service, he taught property and local government law as an associate professor at Rutgers-Camden Law School and a visiting professor at the American University Washington College of Law. Smith began his legal career as a real estate associate at Arnold & Porter in Washington, D.C., and worked prior to law school as an urban planner in East St. Louis, Ill., and St. Louis.

The department in the past several months has added several key members including Deputy Secretary Todman in June.

Since Secretary Fudge was sworn in last March, HUD has added a number of new staffers, a start to filling a staffing shortage that the Secretary addressed during her first week on the job.