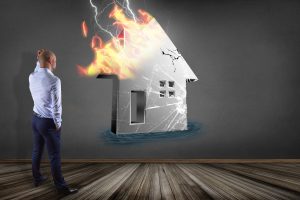 Areas that with increased risk of property damage due to high heat, drought, fire, flood, and storms are not necessarily discouraging incoming residents, reports Redfin.com. In fact, data show disaster-prone areas are becoming even more populous, while counties with the smallest share of homes facing climate risk largely saw their populations decline.

"People have been gravitating to places with severe climate risk because many of these areas are relatively affordable, have lower property taxes, more housing options or access to nature," said Redfin Economist Sebastian Sandoval-Olascoaga. "For a lot of people, these benefits seem to outweigh the dangers of climate change. But as natural disasters become more frequent, homeowners in these areas may end up losing property value or face considerable difficulty getting their properties insured against environmental disasters."

The report comes thanks to a recent collaboration between Redfin and ClimateCheck—which rates climate-risk from 0-100 by county, city, neighborhood, zip code—as well as U.S. Census Bureau records.

The 50 U.S. counties with the largest share of homes facing high heat risk saw their populations increase by an average of 4.7% from 2016 through 2020 due to positive net migration. And the 50 counties with the largest percentage of homes facing high drought, fire, flood and storm risk experienced average population growth of 3.5%, 3%, 1.9% and 0.4%, respectively, due to positive net migration, showed the report.

Places with relatively low climate risk have experienced the opposite trend, Redfin reported.

The 50 counties with the lowest share of homes facing high heat risk saw their populations decrease by an average of 1.4% from 2016 through 2020 due to negative net migration, while the 50 counties with the smallest percentage of homes facing high drought, fire and flood risk experienced average migration-driven population declines of 1.1%, 1.2% and 1.1%, respectively.

Bucking the trend were the 50 counties with the lowest share of homes facing high storm risk, which experienced 0.9% population growth, the researchers added when summarizing the report.