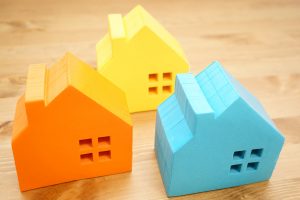 Despite an increase in residential property listings each of the last eight months, the shortage of homes for sale remains more pronounced than ever, home prices continue to rise, and the market shows little sign of softening, show data covering July.

The latest data from Radian Home Price Index and Radian-owned Red Bell Real Estate show that home prices nationally rose month-over-month from June to July at an annualized rate of 14.7%. Through the first seven months of this year, researchers report, the average monthly annualized increase was 10.7% with each of the last three months reporting above average appreciation. Radian analysts calculate the HPI based on the estimated values of more than 70 million unique addresses each month, covering all single-family property types and geographies.

"The addition of more active home listings into the market inventory has not slowed the path of home price gains. Nationally and in most local markets, homes sales volume remains at all-time highs while supply is far below historic norms,” noted Steve Gaenzler, SVP of Data and Analytics. “Home prices are not showing any signs of softening or slowing their impressive gains of 2021. However, while appreciation rates have continued to rise, price affordability has declined. Even with recent reductions in mortgage rates, consumers are buying into a less affordable market which may impact future activity and price growth,” added Gaenzler. 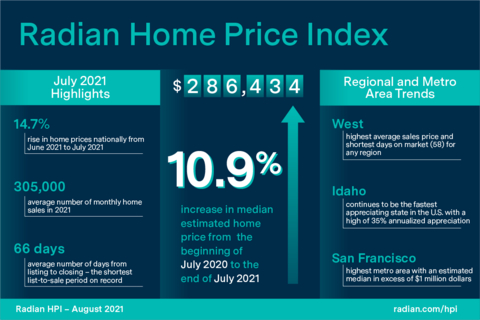 Nationally, the median home price rose to $286,434; prices rose an annualized 13.1% over the last three months, an increase over the second quarter’s 11.7% increase. In July, nationwide, the average number of days a home was on the market prior to contracting for sale dropped to 66 days, the shortest list-to-sale period on record. In fact, homes that are listed but have not yet contracted for sale have also set a record last month for the shortest number of days on market. At only 85 days on market for actively listed properties, the rate of turnover of homes continues to be buoyed by lack of supply.

Some typical real estate trends seem to be returning Radian reports. For example, with the exceptions of only 2015 and 2020, in every year since before the Great Recession, June has been the most active sales-contract month and July was the second most active. The same pattern has emerged in 2021, analysts say.

While conditions vary depending on region, every major metro saw growth in home prices, regional sales, and listing-activity. Idaho continues to be the fastest appreciating state in the nation, Radian reports. Nationally, states displayed a wide range of annualized appreciation rates in July 2021 from the low of 5.4% in Iowa to the high of more than 35% in Idaho.

Down at the metro-area level, seven of the 20-largest metro areas of the U.S, reported slower price appreciation compared to the prior month and four remained unchanged month-over-month. Nine recorded an increase. The Atlanta metro area has the lowest estimated median price of those 20 and San Francisco, the only metro with an estimated median of more than $1 million dollars, has the highest.

As much as home prices are accelerating, a report this week showed in almost half of American cities renting is more expensive per month than making mortgage payments, which eventually could motivate even more first-time buyers, economists said.

While it creates affordability challenges for first time homebuyers, for existing homeowners, the rate of home price growth is a primary condition differentiating the pandemic-related strains on the American economy from that of the Great Recession, experts have said.

Back then more borrowers than not were underwater on their mortgages, while today's home prices have led to unprecedented amounts of equity, thus delinquent borrowers can tap into their equity and sell their home rather than lose it through foreclosure.

“Homeowner equity has more than doubled over the past decade and has become a crucial buffer for many weathering the challenges of the pandemic,”CoreLogic's Frank Martell said when his company issued its equity report last month. "This reduces the likelihood of large numbers of distressed sales from homeowners who emerge from forbearance later in the year."

Radian's full HPI report is available to download at radian.com/whatwedo.