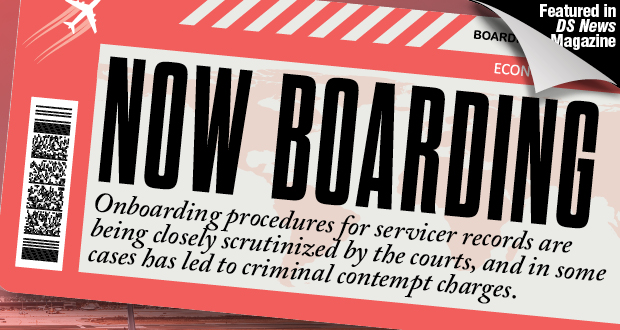 Accurate business records are the foundation of servicing and enforcement of promissory notes and mortgages. Most of the mortgage loan servicing process involves loans originated by others. Moreover, a large portion of loans are involved in service transfers, and therefore the records have been impacted by prior mortgage loan servicers—in many cases, more than one. As a result, it is critically important that the business records maintain reliability from origination to prior servicing, and ultimately to transferring into a new servicer.

Evaluating the reliability of mortgage loan records involves two aspects of focus. First are the legal requirements associated with enforcing promissory notes and mortgages, such as proper endorsements, physical possession of the collateral, and proper assignment of mortgages. The second aspect involves proper loan business records, such as loan histories, escrow histories, system notes, and correspondence such as demand letters. It is this latter portion that is impacted most by loans and servicing data that transfer from one servicing entity to another. The process created to assure proper transfer is known as the “boarding process,” or onboarding procedures.

Several Florida circuit courts have recently addressed the onboarding procedures of mortgage loan servicers. Courts are more closely scrutinizing a servicer’s boarding procedures to determine whether documentary evidence created by a prior servicer, but proffered into evidence at the trial by a subsequent servicer, will be deemed admissible. Generally, if a document is not created by a party to a lawsuit, the party cannot introduce it into evidence to support their case. This is known as the “hearsay rule,” an exclusionary rule of evidence. (Hearsay is defined as “a statement, other than one made by the declarant while testifying at the trial or hearing, offered in evidence to prove the truth of the matter asserted.” § 90.801, Fla. Stat. (2017). Documents are considered “statements” for purposes of this rule.)

There are several exceptions to the hearsay rule, one of which is known as “the business records exception.” [The business records exception to the hearsay rule is codified at Fla. R. Evid. 90.803(6).] Florida courts apply this exception in the foreclosure context to allow documents created by a prior servicer to be admitted into evidence by a subsequent servicer, provided the servicer proffer adequate foundational testimony.

Adequate foundational testimony is the critical point in trying a case which includes prior servicer business records. Typically, this testimony includes a description of how the servicer received the transferred records, where they were stored, how they were audited, and the transition process from staging to production. As a whole, the servicer’s foundational testimony must demonstrate the records were (i) accurate, (ii) reliable, and (iii) trustworthy before they were boarded.

An adequate boarding process which conclusively establishes the reliability of prior servicer records is the standard that must be established at trial. Plaintiff witnesses who have training and expertise in the boarding process provide competent testimony to establish the business records exception to the hearsay rule. If adequate testimony is not presented, the court will exclude the prior servicer’s documents, which often includes the loan payment history, loan comments and demand letters. If business records are excluded, the foreclosure case is subject to dismissal for lack of proof.

It is important to emphasize that the witness who testifies to the boarding procedure on behalf of the plaintiff must have personal knowledge of the boarding procedure. The witness must be able to present testimony establishing an onboarding procedure that demonstrates records were (i) accurate, (ii) reliable, and (iii) trustworthy before they were boarded. The witness must also establish that the current plaintiff and/or its servicer relied on the foregoing accuracy. This does not create a requirement that the witness testifies to having first-hand knowledge of the prior mortgage servicer policies and procedures. What is important is having an onboarding process that verifies the accuracy, reliability, and trustworthiness of the records that were onboarded to the current servicer.

Testimony regarding a servicer’s boarding procedures has become a prominent and often disputed aspect of foreclosure trials. Recently, a Florida court delved even further into the substance and veracity of testimony proffered about the boarding process.  A recent circuit court case out of Miami-Dade County, Green Tree Servicing LLC v. Marin, illustrates this trend and the serious repercussions which can result when the veracity of a witness’s testimony is tested.

In Marin, the defense counsel took the deposition of a servicer employee and questioned the boarding process. The employee offered deposition testimony regarding a training manual he reviewed which included a flow chart documenting the servicer’s boarding procedures. The borrower’s counsel propounded discovery seeking the training manual. Despite a court order to produce the training manual, the servicer refused to do so claiming it was a privileged work product. The judge issued a show cause order seeking an explanation from both the servicer and its attorneys as to why they should not be held in indirect criminal contempt for their failure to comply with the court’s order. Shortly after the show cause order was issued, the servicer produced the training manual, but it did not include the referenced flow chart. This continues to be a key issue in the case as the court scheduled a criminal trial for indirect contempt of court against the plaintiff’s attorneys.

A Miami-Dade Judge went as far as to refer to a plaintiff’s boarding process as a “Legal Fiction.” The Court did not accept the credibility of the servicer witness. The Court ruled that the testimony regarding the boarding process “ … appeared to be merely repeating a mantra or parroting what she learned the so-called boarding process is without being able to give specific details regarding the procedure itself.  [The witnesses] demeanor at trial although professional, was hesitant and lacking confidence … ” The Court went on to discuss the lack of detail in the onboarding process itself, to ultimately conclude that the process was inadequate and not reliable.

Servicers must take proactive steps to ensure they have a well-documented, well-understood, well-trained and well-adhered to the procedure in place for boarding loans. The onboarding procedure ensures documents received from another servicer are accurate, reliable and trustworthy before they are integrated into the new servicer’s system. A servicer’s witness at a deposition or trial must be intimately familiar with these onboarding procedures, together with any and all documentation which supports or describes the process to ensure the court is presented with adequate business record evidence.

Previous: The Week Ahead: Economic Conditions and Real Estate’s Role
Next: Fannie Mae Appoints Sheila C. Bair to Board of Directors