Hurricane Dorian is shifting to the east, but hurricane-force winds are still expected to hit the Florida and parts of the east coast throughout the week, according to updates from the National Oceanic and Atmospheric Administration (NOAA). The National Hurricane Center reports that Dorian's center was some 260 miles east of the northwestern Bahamas and about 450 miles east of West Palm Beach, Florida, moving west-northwest at about 12 mph. 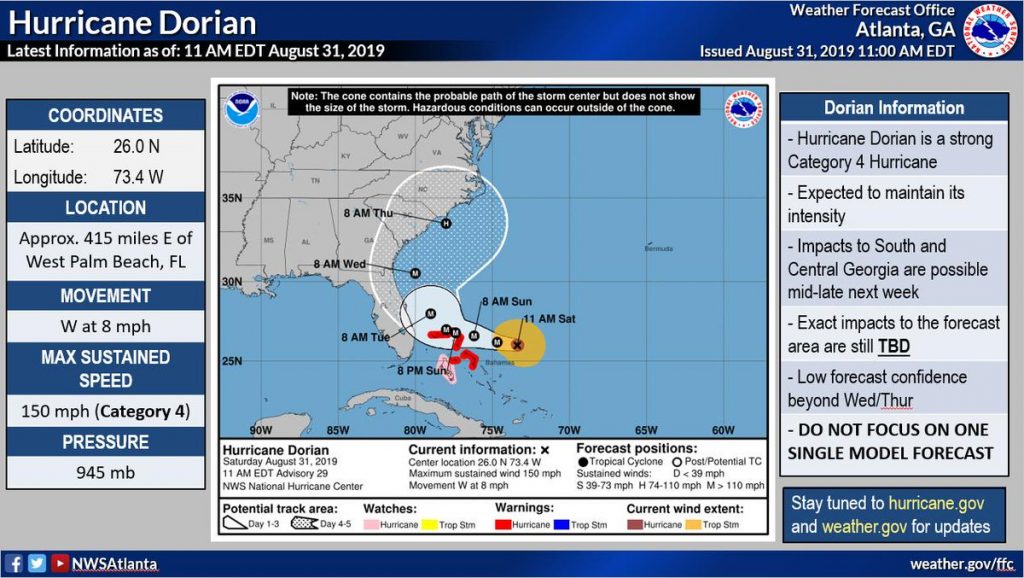 While Florida may be spared a direct hit, CBS News reports that the hurricane could still bring life-threatening storm surge and winds to coastal communities. The storm is now expected to make landfall over North and South Carolina on Wednesday or Thursday of next week. State of emergencies are in effect for the entire states of Florida and North Carolina, and 12 counties in Georgia.

Hurricane Dorian has its sights set on the Atlantic Coast of Florida, as new projections show it could make landfall Monday as a category 4 storm.

CoreLogic is also reporting that 668,052 single-family homes could be impacted along the eastern coast of the state, with a reconstruction cost value (RCV) of nearly $144.6 billion.

The report, which based predictions on the storm being a category 3 distinction, showed 411,199 homes could be impacted in the Miami-Fort Lauderdale-West Palm Beach market, with an RCV of $85.55 million.

“Hurricane-driven storm surge can cause significant property damage when high winds and low pressure cause water to amass inside the storm, releasing a powerful rush over land when the hurricane moves onshore,” the report states.

The state of Florida declared a state of emergency on Thursday as the storm was just more than 200 north of Puerto Rico, sparring the island form a direct hit.

CBS News reported Friday that the storm is currently a category 3 hurricane, but expects it to gain strength as it makes its way north. The potential exists for the storm to bring with it 140 mph winds before making landfall, according to CBS News.

Florida Gov. Ron DeSantis expanded the state of emergency to cover all counties in Florida, and also requested President Donald Trump for a pre-landfall disaster declaration.

President Trump cancelled a trip to Poland to focus on the federal response to the storm.

As of 11 a.m. EDT Friday, Dorian’s center was more than 600 miles east of West Palm Beach and 480 mile east of the Bahamas. Dorian currently has maximum sustained winds of 110 mph.

Freddie Mac's disaster relief options are available to borrowers whose homes or places of employment are located in presidentially-declared Major Disaster Areas where federal individual-assistance programs are made available to affected individuals and households.

In areas where the Federal Emergency Management Agency (FEMA) has not yet made individual assistance available, mortgage servicers may immediately leverage Freddie Mac’s short-term forbearance programs to provide mortgage relief to their borrowers that have been affected by hurricane damage.

Previous: Mortgage Debt Through the Years
Next: Retirees and Household Debt