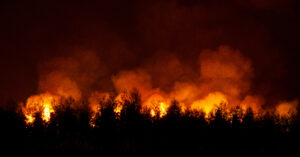 Redfin reports that more than half of homes being built in the U.S. today (55%) face fire risk, compared with just 14% of the homes built nationwide from 1900-1959, while 45% face the prospect of drought. New homes are also more likely than older homes to face heat and flood risk, but Redfin reports the gap is largest when it comes to the threat of fire and drought-like conditions.

Of the climate conditions examined by Redfin, extreme heat was found to be the most common danger, with nearly 100% of all the homes constructed over the span of the last two years deemed at-risk. Heat risk is based on the number of extremely hot days expected in the future. Heat risk was followed by homes at-risk of storms at 78%, followed by fire at 55%, drought at 45%, and flood-like conditions at 25%.

“The areas that are already built are at lower risk of wildfire because they’re not surrounded by forest and trees—they’re surrounded by other buildings,” said Dr. Jenny Schuetz, Senior Fellow at Brookings Metro. “But increasingly, we have to build new housing farther and farther out from downtown areas because the easy-to-use land has been built out and it’s often difficult to add more housing in the urban core. … In the West, the wildfire-prone areas are in the undeveloped lands, and so the farther we push toward the undeveloped lands, the more houses are going to be at risk.”

While Redfin found that new homes are increasingly being built in disaster-prone areas, most of America’s housing stock is not new, as two-thirds of U.S. homes were built before 1990, while approximately 4% were built in 2014 or later, according to estimates from the U.S. Census Bureau.

The share of homes constructed in fire-prone areas has been steadily increasing since the 1960s as builders have expanded beyond dense cities and into areas with more flammable vegetation. More than half (55%) of homes built so far this decade face fire risk, compared to 19% of homes built in the 1960s, and 8% of homes built from 1900-1910. 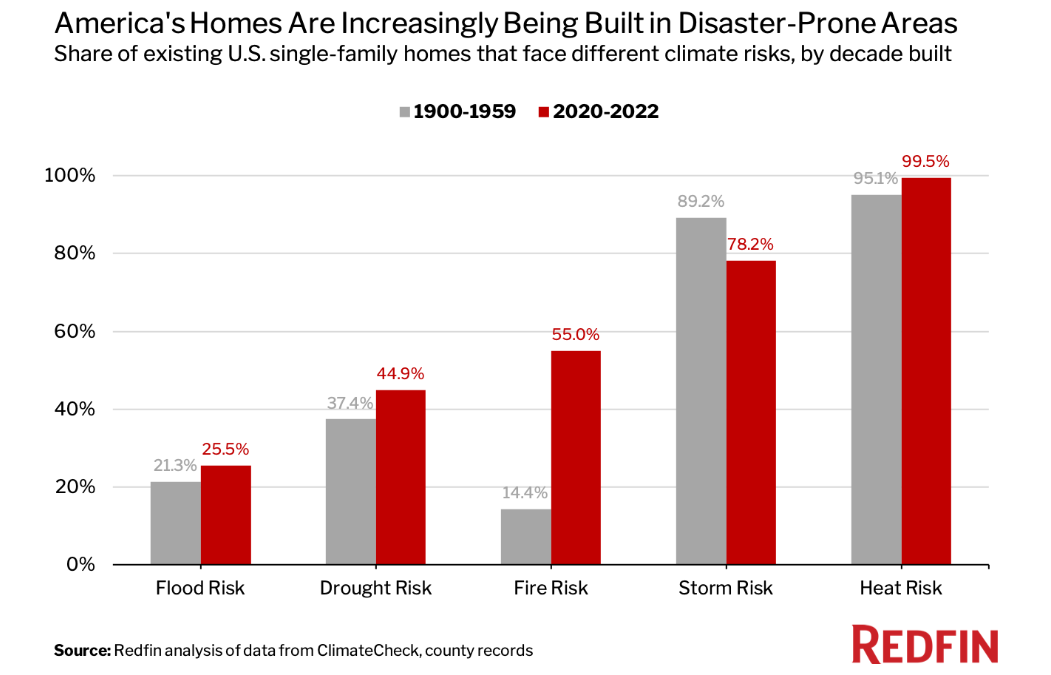 “There’s no room left to build in Salt Lake City, so developers have been moving into the surrounding mountains, which are more prone to wildfires and drought. Record-breaking temperatures and a lack of snow have turned these areas into tinder boxes,” said Redfin Market Manager/Utah Principal Broker Ryan Aycock. “Herriman—a city just south of Salt Lake City that’s right up against the mountains—is attracting tons of builders. Fires were never that big of an issue when Herriman was mostly vacant land, but now, scores of people are moving into harm’s way.”

Redfin noted that a 2010 fire burned more than 4,000 acres and destroyed several homes in the Herriman area after the National Guard conducted machine-gun training despite fire and wind warnings. Nearly 40% of all Utah homes (roughly $220 billion worth) face high fire risk—a larger share than any other Western state.

“Homebuilding has exploded in Arizona over the last few years as our population has soared. Builders are going to the more rural, drought-prone areas because that’s where there’s available land,” said Phoenix Redfin Real Estate Agent Heather Mahmood-Corley. “In Casa Grande—a city just south of Phoenix—builders are selling homes despite warnings that there may not be enough water to go around. In the nearby San Tan Valley, one developer owns a lot of the wells, so they’re able to build unrestricted and sell water rights to other developers.”

Click here to see more on Redfin’s analysis of home being built in at-risk climates.