After Mt. Kilauea in Hawaii erupted on May 17, 2018, CoreLogic released a report on the risk posed by volcanoes. Specifically the study covered what risk the May eruption, which is part of an ongoing eruption since 1983, to understand the great risk basaltic lava flows pose to homes and businesses in its path.

According to the study, the area impacted by lava flow is relatively small, and far from any large city. CoreLogic estimates that within the “thermal zone” (the risk area) there are 5,902 homes at potential risk. Of these, 1,029 homes are in the high-risk area, called Leilani Estates. The average home value in this region is $230 thousand which puts the total value of residential properties at high risk around $239 million. CoreLogic notes that just because a property is high risk does not necessarily mean that it will burn, but still states the importance of knowing the risk. 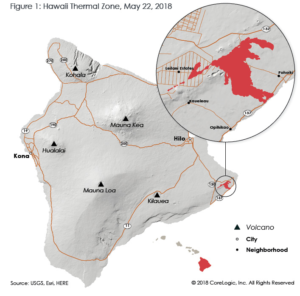 According to the most recent report by Hawaii County Civil Defense on June 23, 2018, lava is covering an area of 6,144 acres, and a total of 637 homes in this area have been destroyed. The states that the total cost of the damage to be around $146.5 million.

While most of the area around the thermal zone has been evacuated, the biggest concern currently is insurance for the lost homes. Hawaii Insurance Commissioner Gordon Ito states that the fire damage on most homes was covered by standard homeowner policies, however, this was not always the case as some policies have exclusions for lava.

Lava is unlikely to stop flowing anytime soon, according to CoreLogic, meaning many unaffected homes are still at risk.

Many aspects of disaster relief may require an overhaul, including those for lava and hurricanes. Leading up to Hurricane Florence, the Urban Institute partnered with the Texas Low Income Housing Information Service to determine where households may get left behind in recovery efforts following disasters. This means in areas like the thermal zones in Hawaii, making smart insurance decisions having a strong grasp of risk will help protect homes.