Home / Daily Dose / And the Women in Housing Awards Recipients Are …

And the Women in Housing Awards Recipients Are … 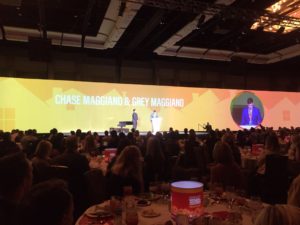 On Tuesday, at the 2018 Women in Housing Awards Banquet, Five Star recognized five women who have made a mark on the industry through The Keystones. The banquet also featured a keynote address by Mrs. Laura Bush, First Lady of the United States (2000-2009).

In his opening address at the banquet, Ed Delgado, President and CEO, Five Star Institute said that the inaugural Keystone awards celebrated the leadership of the women in the industry. “Our business is complemented by women who exemplify characteristics that strengthen and support the industry through their leadership,” Delgado said.

Earlier this year, the industry was invited to submit nominations for the inaugural Keystones. Twenty-five finalists were then selected by a committee of industry veterans who narrowed the field to five candidates within each category.

Joining Flagstar in 2015, was a turning point in her life and was “the best gift that I never asked for,” Thompson said while accepting the award. “Thank you for this honor and I look forward to working with many of you in the future.”

Accepting the award on her behalf, Bill Fahey, VP, Office of Minority and Women Inclusion, Fannie Mae said that Fannie Mae as an organization was very fortunate to have Brown on their team.

“I couldn’t have made it 30 years in this business without the support of such tremendous people behind me and such a tremendous team,” Moore said. “I want to thank everyone I worked with along the way. I appreciate this award.”

Introducing the Laurie A. Maggiano Legacy Award, Delgado said that this was a special award that allowed the industry to carry on the legacy of the Late Laurie A. Maggiano and what she stood for. Maggiano who was the Servicing and Secondary Markets Program Manager at the Bureau of Consumer Financial Protection passed away earlier this year.

Thanking the Five Star Institute for the program and for recognizing women of the industry, Davies said that it was an honor to be chosen for this award. “It is a privilege to be given an award in Laurie’s name,” Davies said. Speaking to Maggiano’s sons Chase and Grey Maggiano, who were present on this occasion and had earlier asked the industry to lift the legacy their mother had left behind, Davies said that she had had the privilege of working with their mother and that she had done some great work. “She served the families and communities our industry touches in different ways,” she said.

After the awards were announced, Mrs. Laura Bush spoke to the gathering in a keynote address that not only congratulated the recipients, finalists, and nominees, but also touched upon important topics such as women’s education, healthcare, and safe and healthy childhoods for children across the world. She said that the good future for the world depended on good education for both women and children and that helping underprivileged children was one of the greatest challenges of our time.

The Women in Housing Awards were indeed a fitting close to an event that saw some of the biggest names in the housing and mortgage industries attending and speaking during various sessions.

Previous: A Smarter Approach to Property Management
Next: Spotlight on D&I and Default Servicing Trends

As we enter wildfire season in much of the country, Realtor.com announced that it is the ...