Home / Daily Dose / Much Left to Do for Homeownership

Much Left to Do for Homeownership 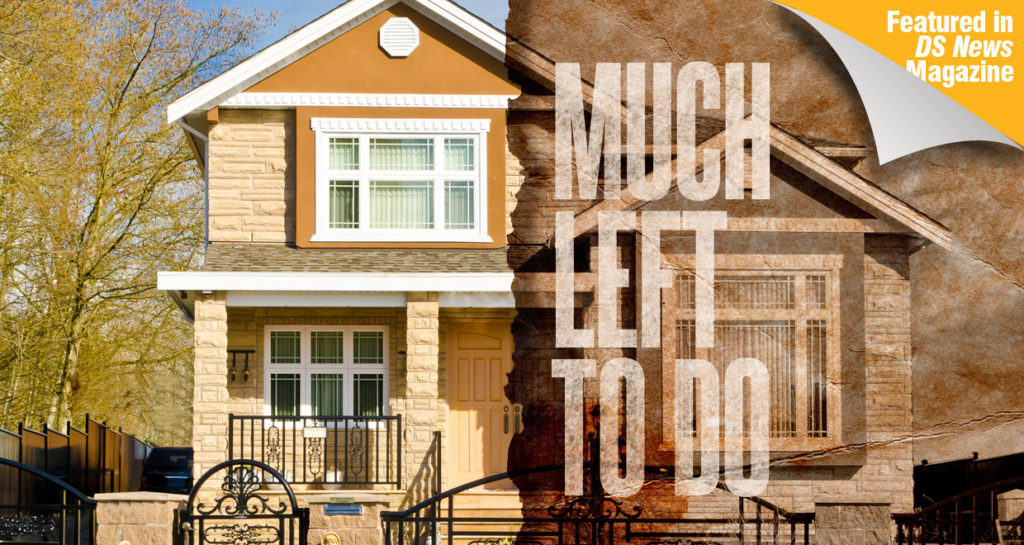 Editor's Note: This feature originally appeared in the September issue of DS News.

Every year since 1988, Harvard University’s Joint Center for Housing Studies (JCHS) has published an annual report entitled “The State of the Nation’s Housing.” Its 2018 edition, released on June 18, came during a year-long celebration of the 50th anniversary of the Fair Housing Act. The 2018 JCHS report’s findings, however, signal that America’s journey towards fair housing is still incomplete, even after reaching its golden anniversary.

This year’s JCHS report found several disheartening realities. Growing income inequality is driving the increase in cost-burdened households for renters and homeowners. The burgeoning impacts of the nation’s still-growing student loan debt are delaying the creation of new households, hitting millennials the hardest. And even after five decades, a racial gap in homeownership persists, especially between black and white consumers. In fact, it’s getting worse.

While Hispanic and Asian-Americans experienced respective homeownership gains of 5.7 percent and 7.1 percent, according to the JSHS report, a 29 percent gap between whites and African-Americans remains. In 2017, 40.4 percent of African-American families were homeowners, while the measure for white families stands at 72.3 percent.

These findings confirm that 50 years’ of fair housing initiatives have yet to achieve their goals. For too many people of color, fair housing in 2018 remains just as elusive as it was when President Lyndon Johnson signed the historic legislation in 1968.

During that signing, President Johnson said, in part, “With this bill, the voice of justice speaks again. It proclaims that fair housing for all—all human beings who live in this country—is now a part of the American way of life.”

The Fair Housing Act provides protections against discrimination based on race, color, national origin, religion, sex, disability, and familial status in the sale and rental of housing by banks, realtors, and insurers. Providing false or misleading information is also illegal under the Act. Even so, significant racial and ethnic disparities within homeownership remain.

The Center for Investigative Reporting found earlier this year that the homeownership gap between blacks and whites is now wider than it was during the Jim Crow era. Another independent research report by the Economic Policy Institute found that the rate of black homeownership between 1968 and 2018 has remained virtually static—41.1 percent in 1968 compared to 41.2 percent in 2018.

In 61 metro areas across the country, blacks were found to be more likely than whites to be denied a conventional mortgage loan. Moreover, while the number of nonbank mortgage lenders is on the rise, these businesses are not required to adhere to the Community Reinvestment Act—a law that requires banks to meet the credit needs of the community, including those of low- to moderate-income borrowers.

According to the Center’s April 11 Reveal newswire, “Since President Donald Trump took office, the Justice Department has not sued a single lender for failing to lend to people of color.” Beyond a failure to enforce this essential law, the Trump Administration has also included fair housing among its overall regulatory reversals. HUD effectively suspended the Affirmatively Furthering Fair Housing (AFFH) rule by delaying implementation until at least October of 2020. The rule was adopted in 2015 to carry out critical goals under the Fair Housing Act, working to end discrimination in housing and foster inclusive communities.

The White House also signed into law the Economic Growth, Regulatory Relief and Consumer Protection Act, a bank deregulation bill that includes a provision that would exempt 85 percent of banks from reporting Home Mortgage Disclosure Act (HMDA) requirements that are needed to help root out discrimination in mortgage lending.

The Office of the Comptroller of the Currency also issued a proposal that will weaken the Community Reinvestment Act, which is a fair lending law that has been crucial in expanding financial access to communities that have long faced—and still face—discrimination. Each year, the Center for Responsible Lending prepares an analysis of the annual Home Mortgage Disclosure Act (HMDA) report. Published each fall, the report is the only federal data report that tracks mortgage lending by race, ethnicity, and locale. The most recent analysis (2016) found continuing mortgage denial rates for consumers of color.

At a time when mortgage rates are at their lowest, it is crucial to the nation’s economy that consumers take advantage of those historically low-interest rates. Broad access to the most cost-efficient mortgages (i.e., conventional loans) would increase the strength of our still recovering economy.

Today’s rates of homeownership between whites and people of color are not the result of luck. Instead, they are the direct result of federal housing policy that has explicitly provided homeownership opportunities to white Americans while denying them to people of color. The federal government’s adoption of the Home Owners Loan Corporation’s underwriting guidelines in 1933, including redlining policies in the administration of its federally insured mortgage programs, institutionalized racial discrimination.

A report by Prosperity Now, an organization that works to ensure that everyone in our country has a clear path to financial stability, wealth, and prosperity, showed that, due to redlining, only two percent of Federal Housing Administration-insured mortgage loans went to homebuyers of color during the first 35 years of the program. In the state of Mississippi alone, just two out of 3,229 Veterans Affairs-insured mortgages went to African-Americans servicemembers seeking to finance a home or business within the first three years of the program. This federal action provided whites with a head start in building wealth in the form of home equity through homeownership.

That wealth has been transferred across generations and is a significant contributor to today’s racial wealth gap. White Americans now have ten times the wealth of Latinos and twelve times the wealth of African-Americans, according to Pew. Specifically, whites have a median wealth of $141,900, compared to $13,700 and $11,000 for non-Hispanic whites and African-Americans, respectively. According to the Institute on Assets and Social Policy at the Brandeis Center and Demos, most of this wealth inequality can be attributed to the differing rates of homeownership between whites and people of color. Homeownership has long been the primary way that most middle-class families build wealth and economic security. Widespread access to mortgage credit is critical for building family wealth, closing the racial wealth gap, and sustaining the housing market overall—which, in turn, contributes significantly to our overall economy.

The lasting impacts of the Great Recession have also eroded the modest increase in homeownership rates that African-American and Latino families enjoyed in the years since the passage of the Fair Housing Act in 1968. “Foreclosures by Race and Ethnicity: The Demographics of a Crisis,” a 2010 research report by the Center for Responsible Lending, found that African-Americans and Latinos were unfairly targeted with risky adjustable-interest-rate mortgages leading up to the housing crash of 2008 and faced foreclosure at a rate 2 to 2.5 times greater than whites. It further found that many of these borrowers qualified for safer loans with fixed-rate mortgages.

Today, the opportunity to purchase, maintain, and refinance a home remains elusive for significant numbers of low-wealth families and people of color. As a result, these communities lag far behind wealthier and white communities. Pricing is a critical challenge in the extension of mortgage credit to families of color.

There is evidence of price acting as a barrier even in today’s mortgage market. For example, although Fannie Mae’s guidelines allow the GSEs to purchase loans with credit scores as low as 620 and loan-to-value (LTV) ratios of up to 97 percent, very few loans purchased by the GSE feature these characteristics. One reason is that excessive risk-based pricing by both the GSEs and private mortgage insurers add significantly to the cost of loans for borrowers with lower scores and less wealth due to historical discrimination for a down payment.

The combination of loan-level price adjustments (LLPAs) and mortgage insurance (MI) premiums adds over 300 basis points to the cost of a mortgage for a borrower with a credit score of 620 and an LTV of 97 percent. According to the Urban Institute, these redundant requirements have prevented an additional 6 million mortgage loans from being originated. Moreover, CoreLogic estimates that more than 250,000 of these loans could go to borrowers of color annually.

Because of these unnecessary pricing restrictions, FHA continues to serve as a vital source of mortgage credit for lower-wealth families. Moreover, borrowers of color are overrepresented in FHA-insured mortgages, including upper-income families of color. An FHA mortgage is often their only option despite the reality that many of these consumers might have the income to sustain monthly payments but lack the down payment or savings for a lower LTV conventional loan due to past discrimination within the mortgage market.

Earlier this year, a newly released CRL research report entitled “Repairing a TwoTiered System: The Crucial but Complex Role of FHA” found that FHA purchase-market share among high-income African-American and Latino borrowers had increased the most. This contrasts with pre-Recession patterns. Since 2009, FHA purchase-market share increased by 642 percent for African-Americans and 904 percent for Latino borrowers, respectively.

If fair housing is to become a reality in America, it will require not only the enactment of federal laws like the Fair Housing Act, Equal Credit Opportunity Act, and Community Reinvestment Act but also robust and ongoing enforcement. Every level of government can and should play a role in delivering a housing market with a level playing field, without regard to race.

It is time for all of America to embrace the spirit as well as the letter of these laws without regard to race, ethnicity, gender, or disability. Every creditworthy consumer should have the same level of consideration—and access. Just as President Johnson stated 50 years ago, “We have come some of the ways not near all of it. There is much yet to do.”

Previous: The Top Markets for Investing in Foreclosed Properties
Next: The Economic Factors Impacting the Housing Market

Nikitra Bailey is EVP of the Center for Responsible Lending (CRL), where she oversees CRL’s coalition building and constituent relations. Based in the Durham office, Bailey is the lead strategist for partnerships that span civil rights, faith, women, labor, and community advocates across CRL’s branches in California, North Carolina, and Washington, D.C. Bailey also leads CRL’s access to mortgage credit advocacy to ensure that low-wealth families and people of color are fairly served by our nation’s housing finance system. She has also provided technical assistance to local municipalities, state legislators, and federal policymakers on abusive lending practices ranging from small-dollar loan abuses to preventing foreclosures.